March being over already feels like an April Fool’s joke.  It cannot be time for a monthly recap yet! 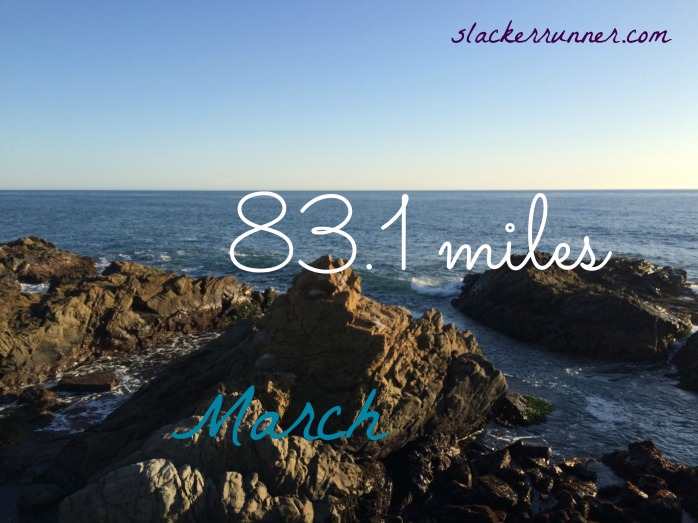 Highest mileage moth of the year so far even if it’s not quite where I had hoped it would be at the beginning of the month.    Had I hit my weekend long run like planned, I would have been closer to 95.  Which is so close to 100!! But close only counts in horseshoes and hand grenades.  Did anyone else grow up with that expression?   I never understood the point.  I mean I do but why say it?

Anyways, moving on.   This was still a damn good month.  I stuck to my training plan fairly well considering I started the month with some crazy tightness and hamstring issues.   March also saw me run a pretty great race , for me, so yay!   I survived a work inspection and filled in at another location.  My stomach was its’ asshat self but I tried to not let it disrupt training too much.    I managed to some mile paces that I haven’t seen in months.    I can’t hold them for very long yet, but even just seeing low 9’s and mid 8’s on my watch is kind of awesome!    Now to work on maintaining them.

That means continuing to stick to my training as closely as I can.    SLO is now less than 30 days away and I am looking forward to race weekend.   A little vacation time, hanging out with runners and running an awesome race.     There’s a local 5K I want to run the weekend after next.  Firehouse 5K, it kicks my butt every year, but it’s such a fun race.   I usually hurt for the following week so I am glad that it falls a little sooner this year.  🙂   All that said, I am glad that I already decided to make SLO a fun race as opposed to a goal race.    At last week’s appointment with my gastro, we decided that the most recent prescription changes were not working.  So I have a shiny new diet to follow.  More on the specifics later, but I had to say goodbye to a lot of things for the next few months.   So very many things.    I am still figuring things out, so right now all I know is that the last few days have been some hungry, tired days.

I had a scheduling conflict today so I moved my easy run of the week to Monday.   Woof, that was hard.  Not sure if it was because it was a Monday, or because my side still hurt a bit or if it was the dietary changes but it was hard.   So much harder than easy should feel.  I was also testing out my new shoes.  While I love getting new shoes, the break in period is always interesting.    While I think I am going to really like them, I had unusual aches and niggles throughout the run.  I stopped every mile or so to stretch out.  I am not really concerned by this because it has happened every time I have broken in a new shoe style.   It usually takes a week or so of alternating shoes to fully adjust.  But that is one reason I bought them a month before SLO.

How long do you usually take to break in new shoes?

What is your March highlight?

What are you looking forward to in April?

24 Comments on “March is Marchin’”