And it’s Monday.  That was a fast weekend.  As much as I would love another day or 4 off, I am really looking forward to this week.    2 of our 3 new hires start today- woo hoo!!!!   The week will be crazy busy but yay!

Rest day.  I thought about running.  Packed my bag just in case but stuck to the plan.   My food choices this past week or so have not been the best and my system has been letting me know.

The plan called for speed work but half way to home town I knew I wasn’t up to it.   I was so tired I decided to move my easy run to Tuesday and do the speed work when  I was feeling more alert.   This easy run kicked my ass.   It was only in the high 80’s so I figured I would be fine plus my usual up and back has shade throughout so I though that would help.   As I was heading out I saw a suspicious situation- think drug pick up like, or at least how I would guess one of those looked- so I knew I was going to take the longer way back which is a little more public.    I though that extra 1/2 mile was going to kill me.   I was huffing and puffing so bad I was actually worried about an asthma attack.  Easy should not do that!   I didn’t look at my splits until later since I was irritated.   Ok, I guess it makes a little more sense now.  Oops! 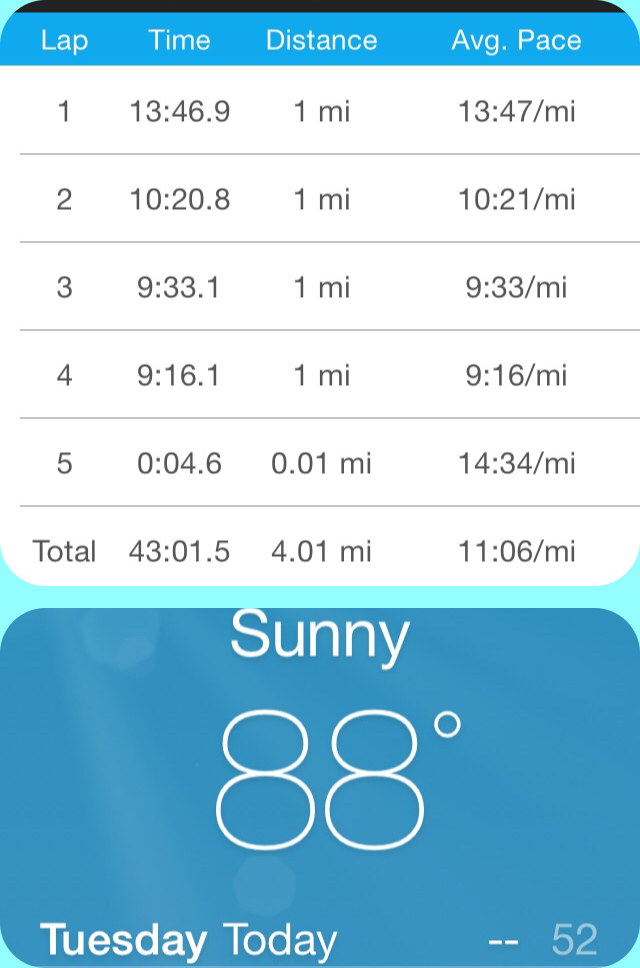 After the previous day’s accidental progression, I thought about skipping the speed work.  The plan called for a 15 minute warm up then 4 x 2:00 @ HMP with 1:00 recovery in between then cool down.  That didn’t sound too bad so I figured I would try one and go from there.    Since I have such trouble doing math while running, I decided that my goal half marathon pace will be 9:00.  It will give me a tiny cushion to hopefully break 2 hours and the splits will be a little easier to remember while running.    🙂

I did my warm up and then changed my watch to current pace so I could pace the intervals.   They felt harder than I would have liked but doable so I kept going.   My watch flashed low battery as I was finishing the 3rd interval so I stopped to save what data I had before continuing on.   I finished my last interval and then did the cool down.     I checked my splits as I was stretching and noticed that my intervals were all pretty consistent… and that either I wasn’t using the current pace feature or it was really wrong.  I can only dream that my half marathon pace will be 8:30 one day.  What the heck?

Planned rest.  Another meeting about a race but this time other people showed up, woo hoo!  And I got happy mail!!!!!  Thanks Pavement Runner!

I was off before 6 so I thought about running a few miles but I didn’t want anything to interfere with getting in a longer run on Saturday morning so I decided to stick to the plan.  Instead I did all my usual Saturday errands and shopping so that there were really #noexcuses on Saturday.

Thought about running but some cleaning projects ran away with the day.   On the upside my car is no longer an embarrassment.     🙂   I also worked my Hogwarts swap craft and it’s not coming along like I planned.

Second week of training- complete!   My mileage is finally going up- woo hoo!

What are your plans this week? One thing you’re looking forward to in July?  How is it almost July?!

Ever seen something shady on a run?

Anyone else’s car look like they live in it?  I think I had 6 pairs of shoes in there.

I start packing for every race trip by laying all the the important stuff out.
Post work miles.
4 miles on a Saturday looking at trees.
It’s nice to have an actual schedule again.
Long run Sunday. And it went way better than I expected considering September has basically been the month of migraine.
Eating a donut at 4:30 was risky.