Ahh, Daylight savings time.  Love the extra hour for about 2 days in the morning but hate it in the evenings for running.   However, since the time change didn’t take effect until Sunday, I can’t really blame the laziness of the week on that can I?  Nope, this was all me.

Monday- Rest Silly Slacker forgot her Knuckle Lights and I do not go the gym on Monday evenings.   So I just headed home.  Bad idea.\

Tuesday- 4.3ish miles bike I had my gym bag from the day before and my previously misplaced lights but with it being Halloween I figured an outside run was probably not a good idea.    My gym also has a tendency to close early for every holiday (which I previously learned the hard way) so I admit I didn’t even try.  I aimed for some cross training instead.  Maybe the not running was for the best as barely 4 miles in I was running away sick.  Stupid stomach.

Wednesday- Rest Ok I can never miss my Monday run.  It’s just a downhill slide of lazy after that.   It was too easy to be talked out my run tonight. 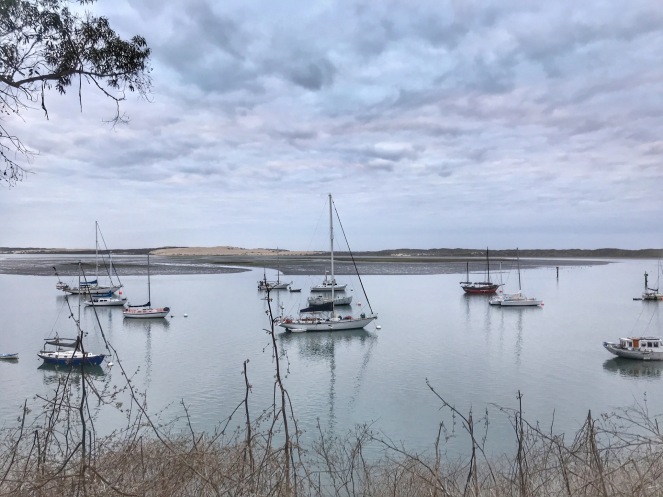 Thursday- 3 miles I ran from work hoping to take advantage of slower sunsets except it was overcast and the summer barely came out. Boo.   Other than that it wasn’t a bad easy run.  And somehow even with the massive hill at the end I still kept my heart rate out of the red zone.  Tiny wins.

Friday- Rest I didn’t have to work open to close- wow that was nice!   Getting home was a little tricky as the league championship high school football game was being played down the street from my house.   Spoiler alert- the home town that has gone through head coaches in a year (so much drama) somehow pulled off an undefeated season.

Saturday- 3.1 miles  I am trying to prepare for Vegas for so it was another double afternoon run weekend.  Saturday went according to plan.   Not speedy and kind of chilly to start- odd storm clouds had rolled through on Friday but it cleared partially mid-run and suddenly I was overdressed.  Ahhh, the running outfit struggles.

Sunday- 7.75 miles All aboard the struggle bus.  I set out in the early afternoon with a plan for 10 miles.  Mile 1 started out ok but mile 2 turned into a something different.  I couldn’t control my pace and my breathing was out of whack.  Just as my watch chimed mile 2, I felt like my blood sugar bottomed out and it was all I could do to stay upright.   I stopped and took a few moments.  I then changed my route so I was always near people and cars and I turned on the run/walk intervals so I could force myself to keep things easy from then on out.  That said, I still wasn’t sure how far I was going to get.   7.75 brought me back to my car and that seemed like a good number. Or better than nothing.

And now we’re on to Vegas week!

Imposter.
Volunteered at the local Turkey Trot this morning.
Have I mentioned I love good mail days???❤️❤️
Is it ironic for a Slacker to be wearing a shirt that says “Do The Work”?
Oh, Timehop was brutal toady. This time last year, I was at the Grand Canyon.
Been feeling a little rough the past few days and taking it easy.