I hope everyone had a safe and happy New Year’s.   Mine was uneventful- just how I like them.   Actually, I ended up being sucked in to watching The 100 on Netflix which is why this post is going up one day past schedule-oops!  So without further ado, let’s talk about those hoops I want to jump through, err, I mean goals for 2015. 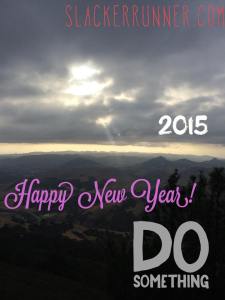 So I received a notice from my doc that says “congrats, you are negative for cancer but we have no conclusion as to what is wrong with you”.  It seriously said that.  So, ummm, yay?   So it’s back to the drawing board.   That means it’s time to play with my diet some more.   I am not going paleo (I like dairy) although I am buying the book, nor gluten free but I have been trying to cut my grain intake by about 85%.   When I follow through, I feel a little better, holidays made following through hard.    And yes, this means I need to limit my pizza intake to once a week at most.   I started this in December so I am going to give it a few more months while I see if it helps.    I’ve known I should restrict my carbs so I need to work on that again.  On the upshot, I ran better when I did this, so fingers crossed!

Fitness- who am I kidding- Running-

Life and other stuff-

Read more–  or get back to it.  I used to read 4-5 books a month and I think I barely hit 12 this past year.    Work was crazy and I didn’t get a lot of lunches but that should be better in 2015- fingers crossed.  That put a serious dent in my reading.   I would also like to get back to reading before bed which mean I need to turn off the computer and that is hard.  🙂

Socialize more- I admit I am a homebody.  See above for my NYE plans.  🙂   I need to try to get out a tiny bit more often.  A couple of my coworkers and I are talking about running together after work, so that’s something!   I would also like to spend more time with ML, A, C and NikeC and R, I am hoping we can make something work.

The blog–  I would like to redesign the blog.  Which I have started on but am not where I want to be.   Sorry if you saw it in it’s various states in the last few days but there’s likely to be a few more in the pipeline.  Bear with me while I try to be tech savvy and will likely fail!  But on the upshot, most times the mobile version looks good and it’s just the computer version that looks off.