I say my legs love hills but this tested that theory.

I didn’t look at the elevation chart until the Friday before the race.

Walking to the start line, I could see the half marathoners on the first climb– no one was running.

At one point during the race, I heard a woman huff out- “rolling hills, my ass”.

At the end, a woman wearing a Leadville jacket is talking to another 5 mile finisher asking how she’s feeling.  She then says she would never do these races because if you are under trained  they’ll wreck you.  Ummm, what??!

Ok, backing up.  SLO Ultra is a trail races that offers a 50 mile, marathon, half marathon and 5 mile.  I had originally planned on running the half but then conversion month and the stupid antibiotic non running episode derailed me.  I figured I would downshift to the 5 miler.    I’ve done multiple trail races, how could this be worse than the 25K? I could handle 5 miles. 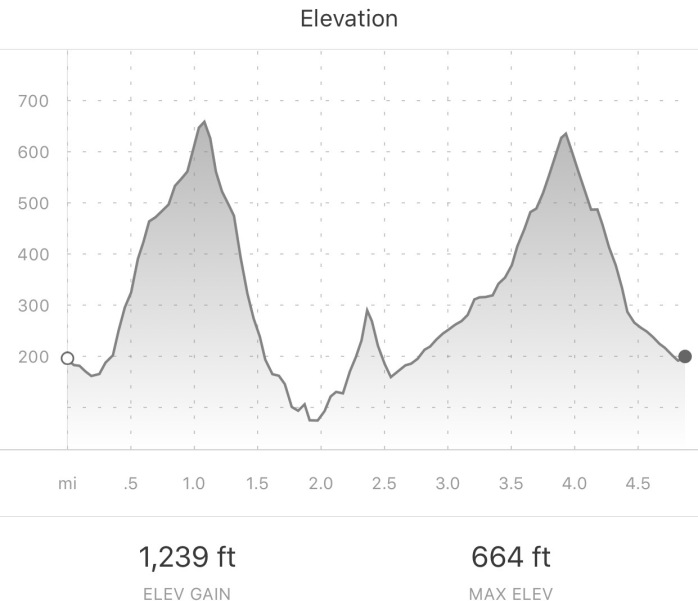 Then I checked the website the Friday before and saw the elevation profile.  1500 feet and change over 5 miles, WTF?  Combine that with the abnormally busy Saturday I had ahead and I almost considered a DNS.    But I followed through.

The race was run on trails on private property out by Avila Beach but they all had staggered start times so my race didn’t start until 9:30.   I was able to still get parking on site about an hour before the start and slowly made my way the 1/2 mile or so further in.   As I said, I could see the half marathoners on the first real climb and it was not reassuring.    Hanging out near the start didn’t help.  I saw runners coming back through the start and they looked rough so I figured they were the marathoners finishing a loop (didn’t have enough gear to be 50 milers).  Nope.  Just the half marathoners finishing mile 3.     Oh crap.  Then it was time, so we all lined up.   Only to be warned the first 3 miles were Hard. Yay.

We were off!  And we ran for all of .25 miles.  If that.  I take consolation that 95% of us slammed to a crawl.  There were still some speedy people out there (Pepe, Racheal I’m looking at you) but us mortals all were struggling just to power hike the damn mountain.   Like hands pushing down on knees trying to get leverage going up the hill.   We were all breathing so hard, it was a symphony of wheezing and gasping.  But the views halfway up?  Awesome.  But damn that thing was steep.

Does this climb ever end?!  Oh damn, I think something is in my shoe.   Oh look, downhill!  I shouldn’t run fast but, on your left!  Hey, this woodsy part is cool, let’s take a pic.  While running down a hillside.  Looks at watch- at a 9:20 pace- living dangerously.  😛  Oh- my first water crossing!  Ok, it was tiny but it still counts!  Then there was a portion of single track where some people didn’t have the best trail etiquette.  Stay on the trail!  This is why we can’t have nice things.

Another climb.  Not long but steep.   I made friends.    We were commiserating.  One woman asked her friend is she was doing the mountain bike races the next day, (same course) she was no longer sure.   Another asked if these hills were worse than those of the San Francisco Marathon, 3 of us shouted out Yes!  I cracked a joke that I don’t think this is what my doctor meant when he said to return to running slow and easy.   We had a downhill and I ran on to the flat and back to the start to the aid station but I was noticing a problem.  I couldn’t run the flats.  My legs were shot.  My Achilles’s were the tightest they have ever been and the flat surface felt like it stretched them out too much, kind of like they were going to tear.  So I backed it off and walked.

Ok, maybe I backed off too much.   Yes, there was another big climb in this mile but I think I lost the most time on the flat section truthfully.  I chatted with a man I had been yo-yo’ing with most of the race.  My GPS had also been off since the tree covered section in mile 2 so I really had no idea how far I had left in the race.  Oops! 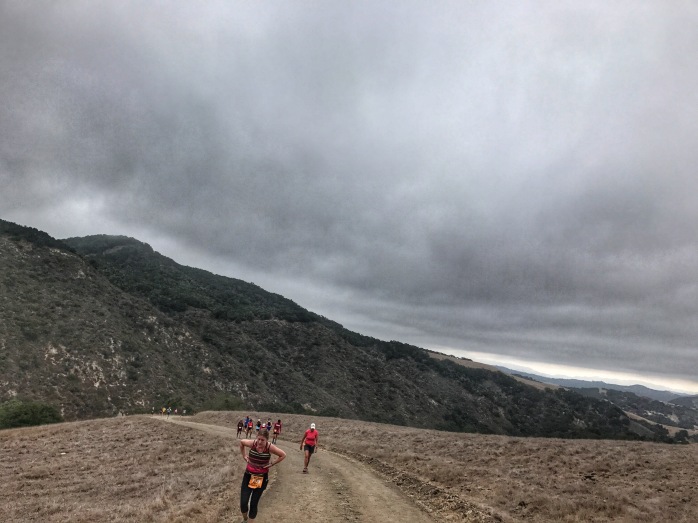 By mile 3.8ish I could see the turn around point at the aid station and I was done.  I jogged up to it, grabbed a cup of water, drank and then decided my legs had wings.   I almost ate trail in a section that was like running through a sandbox.  I hit the flat section and my legs suddenly felt ok so I kept going.    Slowed down so as not to face plant over the rickety bridge over the stream right before the finish line- almost did anyways- and ran through the finish.

So much slower than I would have liked but I survived!  And I was still in the top half of the pack so that’s how damn hard this freakin’ course was.   I am also having trouble walking 3 days later.  😛     Good thing about slower?  I never got misdirected like more than a few of the lead runners did.  Oops.

I will run this again, stronger and faster.  I think I can, I think I can.  Plus, that’s the only way I can get back on those trails.😊