Having mostly decided the night before that I was actually going to do the smart thing and drop to the 5K, the temps that I saw upon waking on race morning almost made me DNS.   32 with heavy fog?? Say what?  What was that all about??  On a good day, that would be rough, the morning after so many days of feeling horrible?  I just wanted to burrow under the covers and hide until summer.

But I didn’t.  I got up and dressed and headed to the race.  I had to get to the race early enough back to bib check in and down grade from the half marathon to the 5k.   Never having done that before I didn’t know how it would go- it took maybe 5 minutes. And only that long because the computer network crashed.  I then went and hid in my car until the start.

I haven’t “raced” a 5K in so long I can’t even remember and I still didn’t feel good so I wasn’t holding out hope that this was going to work out so well. 😛

Mile 1-9:30 Oops, can’t hold that, least not today.  Truth is, I was so damn cold, I felt like I was crawling.  The first mile took us on a dirt road back through the vineyard before dumping us out on the street.   I wish we could have stayed on the dirt but we were still running past vineyards and at least the roads were mostly closed.

Mile 2- 10:25  My calves/ achilles were tightening up which I kind of expected as it was cold, I was wearing my Altra’s and the miles had been pancake flat.  I don’t like flat.  We had turned onto a street and were running past a few houses and mini ranch’s.   I use that term based more on the horses and goats and chickens than the land size.  We ran past the one water station before hitting the turn around and making our way back.

Mile 3- 10:26 Oh, the tightness.  My legs felt so tight.  I was surprisingly feeling ok though in both my stomach and the fact it’s been a while since I’ve run without walk breaks.  Like I said in a recent post- they’ve become a crutch and that is not what I meant to happen.  However I had a choice to make about my calves.  My pace had slowed and was showing 11:20 something.   I could run on with the tightness or I could stop and stretch it out.  I stopped and stretched for 10-15 seconds.  It wasn’t enough but it helped.   I pushed on back towards the winery.  Once I knew I was within 1/4 mile, I pushed play on my Aftershokz with a perfectly cued up song for that finish line push. 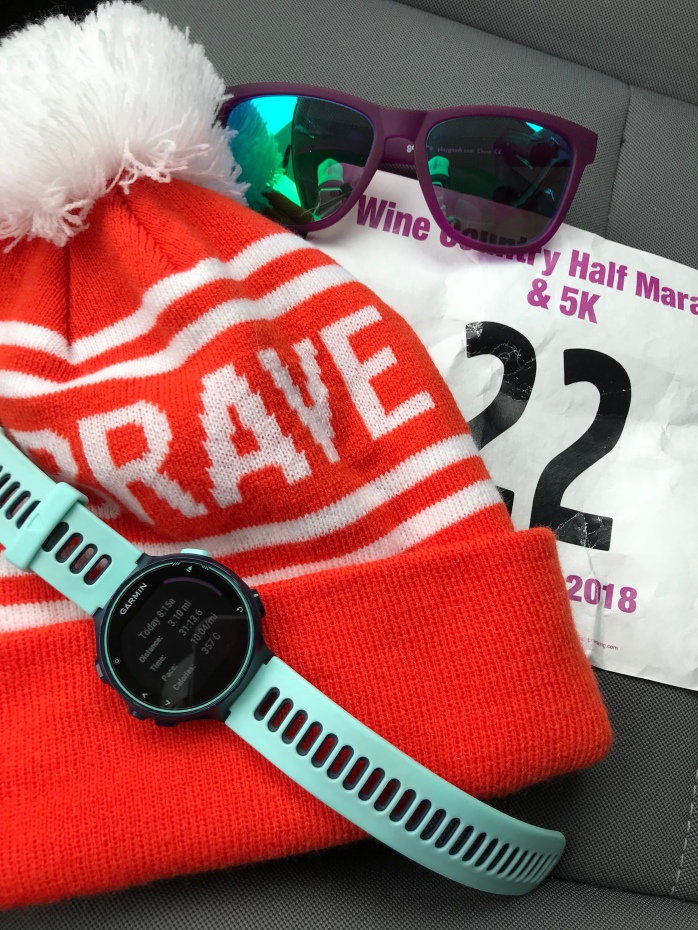 Well, hey now, that’s actually way better than I was expecting!  And I ran the whole thing!  Small victories.  😀  I was nowhere near PR pace and I am fine with that.   The fact that I had a finish line push after 4 days of hell is more than enough for me.  Though I should probably give some of that credit to Shinedown‘s latest- Devil.  It was just the kick in the pants I needed.  It also turns out that stopping to stretch was also the right choice.

5K’s are kind of fun… why did I seem to forget about them???

Sometimes things don’t go according to plan.
I don’t think I’m cool enough for these shoes😍
A wardrobe malfunction of a run turned walk. If only the long sleeves in 85 was the only issue.😂
New trails and a little lost.
When you use 3 different watches, tracking gets a little complicated.😂
3 years ago, I was crossing the finish line of Big Sur International Marathon.