Dang those targeted Instagram ads that sneak up on you.    I was scrolling my feed one evening when a cute wine bottle shaped medal jumped out at me.  I don’t know why- I don’t even drink wine- but I saw that it was in Santa Barbara, fit my training plan, reasonably priced and vineyards usually meant dirt of some sort.  So I clicked through and registered.

As race day loomed, I was tired and fussy and wondering why I even registered.  They said the proceeds were for the Santa Ynez Valley Aquatic Foundation so maybe they could just use the donation?   Then I noticed the winery wasn’t actually in Santa Barbara but Lompoc and spoiler alert- it wasn’t really there either.  However I laid out a lazy flat runner and tried to get some sleep for the early morning drive south.

Race morning was actually a bit chilly in home town and made me question my shorts choice.   After a little driving shenanigans, we arrived at the race location- Sanford Winery and were directed to parking.   Then I had to decide on what shoes to wear.  If you’ve never run in an actual vineyard before, they can be a mixed bag.  They range from super nice fire road to ankle rolling hellish nightmare.  I didn’t know what this was going to be.  I wanted the cushion of my Levitates but chose my trail shoes.   Smart choice. 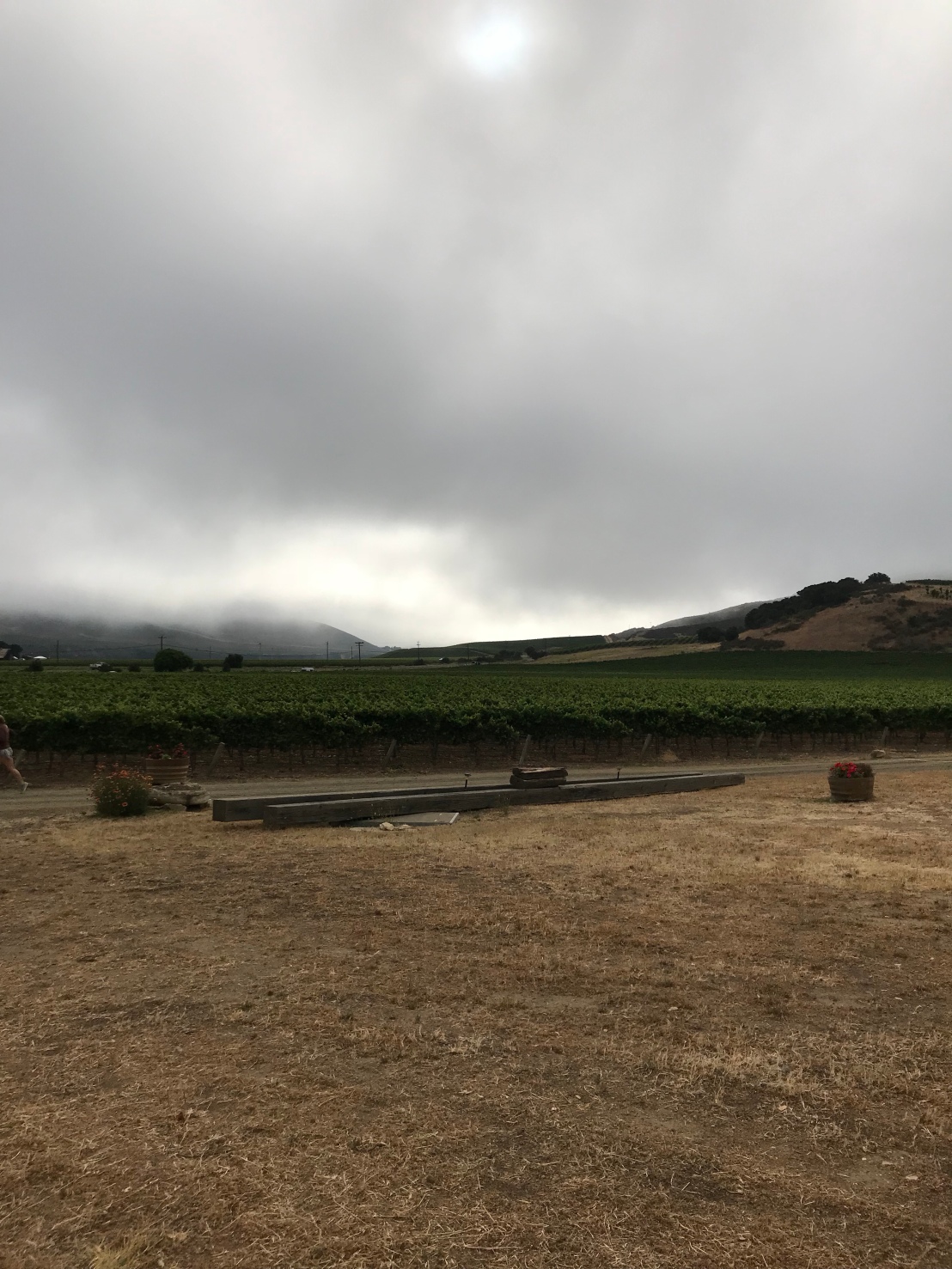 Picked up my bib and shirt, used the port a potty and waited for the start.  It was around 60 and overcast but at the last-minute I tossed my long sleeve layer to my mother.  I normally run cold but something told me I wouldn’t need it.   After a few announcements that I couldn’t understand over the spotty PA system, we were off through the winery. 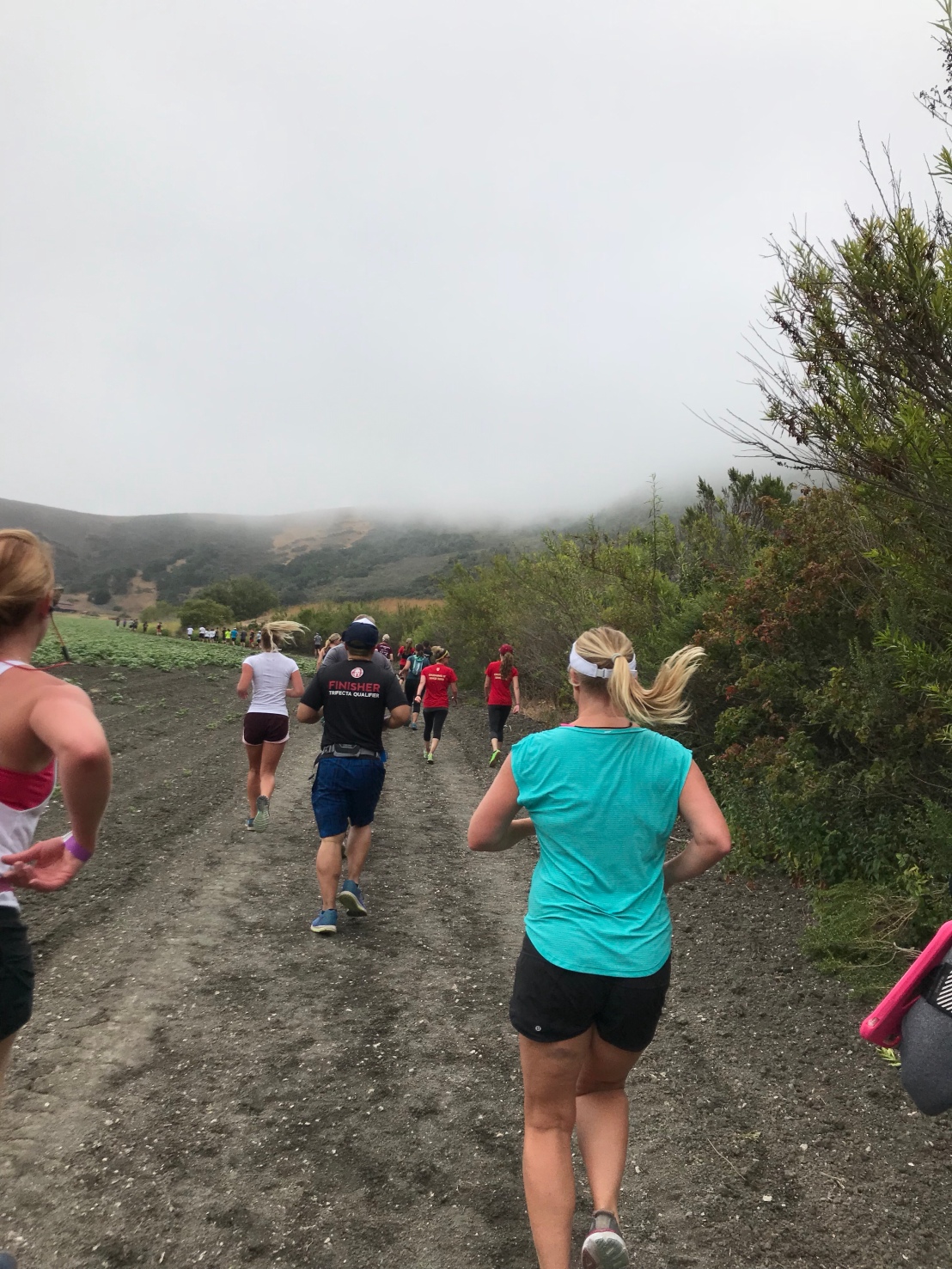 Dirt roads- yes!  But woah, that is some loose dirt.   And what the hell, my shorts just turned into underwear.  I’d never had that problem with this pair before.   I spent the next mile or so pulling my shorts down every 20 or so yards.  It was super humid so my lungs weren’t happy and I was breathing hard but I wasn’t out there to set any records.   Mile 1 had the cutest mile marker- a wine barrel with 1 foot painted on it.  By mile 2 and the wine barrel with 2 feet on it I figured out the pattern but I am a horrible blogger and failed to take pictures of any of the mile markers.

On the upshot, my shorts calmed down and behaved the rest of the race.  Downside #1, we started a 300 foot climb.  Downside #2- I hit a rock with my bad foot and rolled it in a bad way.   Colorful words spilled from my mouth and I slammed to a halt.  Then I hobbled my way up and on, trying to make sure that I didn’t step on any more rocks.   The route was still mostly dirt path but the rocks were getting bigger.  This also made them easier to avoid but I had to focus on where I was landing my feet.  What was I thinking running a race?

Mile 4 started by running through a barn and for some reason I found a second wind.  We had a little bit of a downhill but because my foot was being an asshat I couldn’t really RUN downhill.  I was still trying to watch where my feet were landing before they landed and avoid all rocks.  As well as check out the cool outbuildings and the scenery in the vineyard as the sun had come out and it looked super pretty.   I managed to find another rock coming down a little bump in the last mile and let another string of words fly.  A guy running next to me asked if the hill was too steep, I refrained from being a smart ass and replying that it wasn’t even a hill in my opinion and just said I had hurt my foot a few miles back.   The last bit of the race had us running literally in between the vines.  Oh holy hell of rockiness.  There was nowhere to put my feet that didn’t hurt.  I damn near walked it but I was so close to being done.  As it is, I slowed way down.   Finally another few curves and there was the finish line! 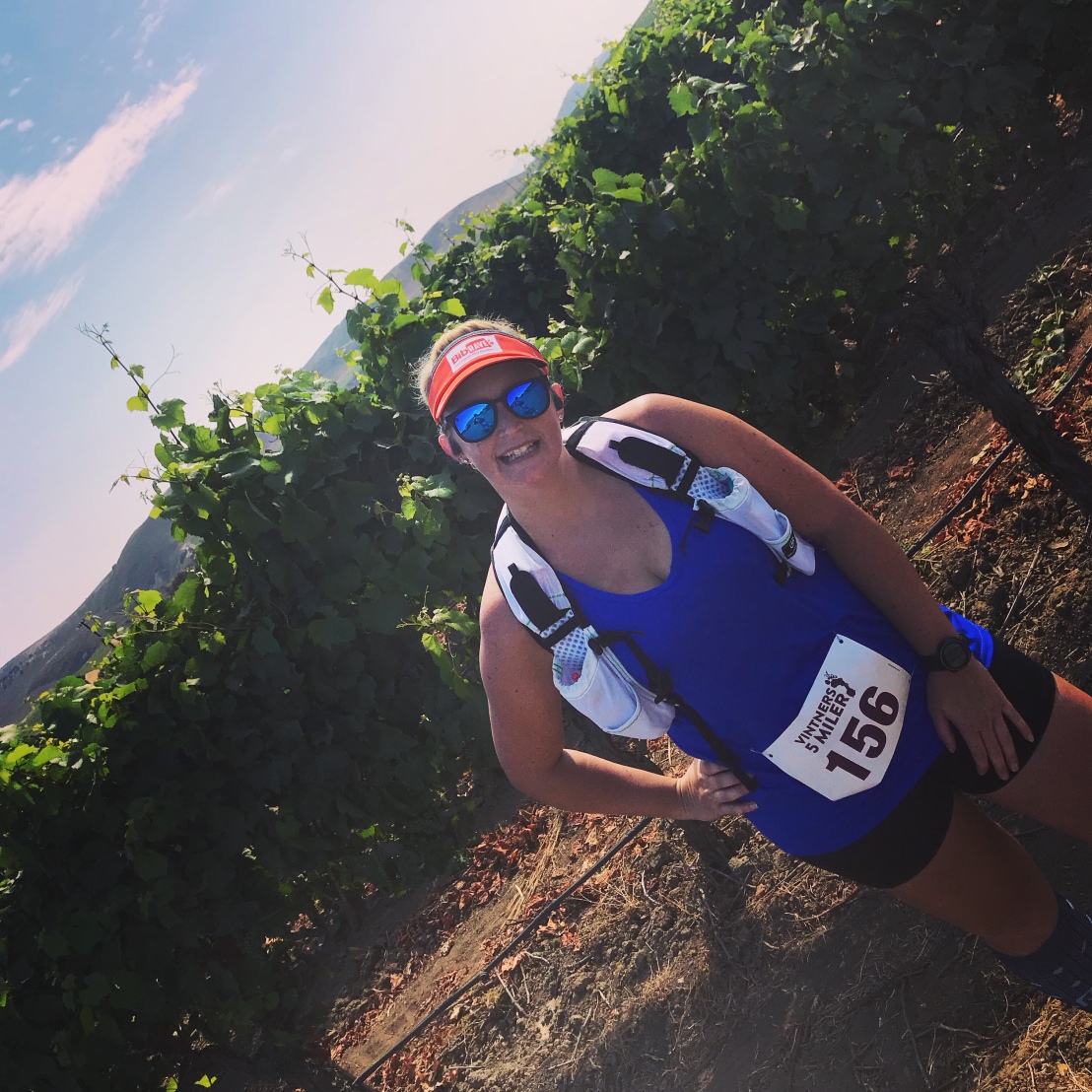 If we consider this a true trail race- it was my fastest 5 miler by 7 minutes but as it only had 400 ish feet of elevation gain, I am not sure if I do.

Once across the line, there was some confusion.  Registration claimed it came with a medal and wine glass for every participant but neither was anywhere to be seen.    Now,  I downgraded from the festival to just the race so the lack of wine glass was not a huge deal to me but the lack of medal was a little confusing as there had been zero announcements.

I was not the only one confused as evidenced by Facebook comments post race.  We eventually received an email that said there had been a delay with the medals and that they would arrive Monday, then the race would be in touch with us after that.  However it is now Thursday and that was the last time the race reached out.    I have run numerous races with no medals but it’s another thing to say you are going to do something and then not do it.

Communication issues aside, I really did like this race and would consider running it again.

When life throws lemons on your vacation in plans, you enjoy midday miles on a Monday.😄
New mantra??😂
Happy birthday @bearcat_tennis!!!!
Merry Christmas 🎄 to me😃😍😂
Cheesy? Yes. Do I love it? Yes.😂
When life gets odd, a little time in the dirt always helps.
Join 2,610 other followers