Sunday was bright and sunny and on the schedule was the company picnic.    I really like lazy Sundays but I don’t get one for awhile beginning with this picnic.  I always seem to be one of the first people to show up anywhere.  I even tried to be late.   I left later than planned and even got stuck at a take-your-life-in-your-hands stop sign turning onto a highway.   I was still on time.    I always feel awkward at these kind of things, I am not the best at mingling.  Case in point- a slideshow of pictures from the event was released today- in one pic, you can see me standing by myself with my arms crossed.

I eventually did get to mingling.   The weather was great, the food (BBQ) was good.  There was a bounce house-slide thing, volleyball courts, some bean bag toss thing and lots of chairs and cabana type things, oh and a tug of war.  Am I not great with the descriptions?  I got to see some people I hadn’t seen in a while and met some new ones. Tug of war was interesting to watch.   I also took part in a volleyball game against the executives.  Not that I did much, I don’t think the ball ever came my way.    Truthfully, I was ok with that because during the warm up games, my left foot managed to find a rock.  Which left a nice hole in my left foot.   The paranoid runner in me was kind of freaking out, I have a half in 2 weeks! 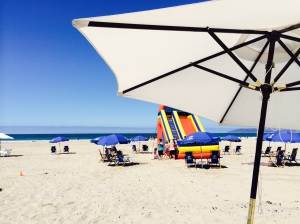 Speaking of a runner, when I first got to the picnic, one of the greeters asked me how many miles I was running or had run that day.  When did I become that person?   I admit that I am still surprised when people call me that, I still feel like a slacker.  🙂  The picnic went til 3 but I left at 2.  Between Saturday’s long run and a few hours on the beach, I had had way too much sun.  Before leaving my house I plastered on sunblock but I still ended up red.   I took more pictures but my phone was having issues and didn’t save them, boo.

Monday I came up with every excuse to avoid a run.    Work had been stressful, I had a headache, my foot still hurt from the day before, yada yada yada.   But I knew the main reason was because of Saturday.   I told myself to stop being such a sissy and made myself go to the lake path.  Why the path?  Because I knew there would be dogs there.  Let’s rip off the band-aid before my imagination can make things even worse.

My foot really did hurt so I took it easy, only 3 miles.  My mom called while I was warming up and apparently I sounded a little freaked out.  The first dogs I saw were Chihuahua size, ok I got this.  An off lease German Shepherd- not so cool.  Oh look a pit bull, but on a leash, another Chihuahua, and a Pomeranian.  The pep talk I was giving myself in my head was all over the place.  I was not exactly relaxed but I was dealing.  I rounded a corner and there was a Great Dane.  He looked friendly but his sheer size had me skittish.   3 miles was enough pushing it for that night.  I did it!   Still not happy around dogs but run done!

Ever play tug of war at work? How about slicing your foot and trying to run?

What are you doing this weekend?  Looking forward to it?

13 thoughts on “A picnic and a challenge”