Have you ever had one of those weeks where you were just in left field?  Like the world existed on one plane and you were on some other cuckoo level?  Yeah that’s where I am at this week.  Welcome to my planet.   Today I actually told a coworker “that I had never forgetted” something.  Seriously?  Did my brain take a vacation without me?  *Case in point- I published this without a title and had to correct it. 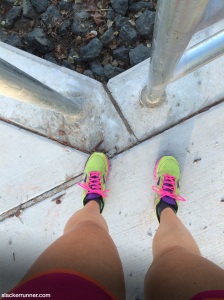 Last Friday, I had the start of a headache.  Combine that with all of the sun from a 2.5 hour run on Saturday afternoon and a few hours at the beach on Sunday and you get a raging headache that arrived Monday.  And it’s still here.  It’s my good buddy now.  Ha!  Monday’s run, though stressful, helped a bit.  On Tuesday I set out for another run.   I met my mom after work at the river path, it made for a nice warm up.   I kept it pretty easy though, so just 4.5 miles with warm up and cool down.   I did push it a bit for mile 4.  Thanks to my lovely stomach I can only go faster than 9:30 in short bursts.  Anything more than that is just not working right now.    Once again the headache eased while running only to return later.  It’s like a bad penny!

Wednesday was more of the same but I refused to cancel on gym night with NikeC again.  Plus it’s back to Wednesday nights now since my class was canceled due to low enrollment.  Boo!   I crawled a mile on the treadmill for a warm up before we hit the circuit room.   I used slightly lower weights than normal but at least it was something.   I also did a bunch of squats because those didn’t hurt my head, and I can so feel it in my legs today.    Our gym offers a boot camp type class on Saturdays and NikeC went this last Saturday.  I want to go but am waiting until after the Ventura half.  The trainer came up to us while we were warming up and asked me why I didn’t go.  I said I didn’t want to try anything new before the half.  She replied that they had never had anyone get hurt.   Maybe so but I am just plain clumsy.  When I informed her that I currently had a sliced foot and had managed to cut my hand that day, she decided I needed an injury/ liability waiver.   Nice. 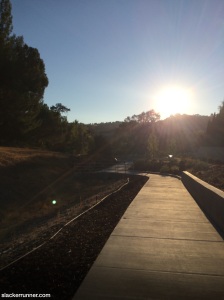 Today I just marched to the beat of my own drum apparently.  And the drumstick was broken.   For those who are thinking why doesn’t she just take something for her headache?  I usually would if a headache lingered this long but I am currently taking the lovely (multiple) antibiotics prescribed by my doctor and figured that was more than enough pills.  I made myself go to sleep earlier last night and slept with an ice pack on my head.  But even with all that, today was a rest day.  Tomorrow likely will be too.  I tried running it out, so now I’ll try waiting it out.  This usually happens 2-3 times a year, so it will pass.

I have one last 8-10 miler that I would like to do this weekend and then it’s taper time!!  I won’t lie, that actually sounds pretty nice right now.     But right now I am looking forward to cookie Friday and a 3 day weekend!!!  Which hopefully means sleeping in.

How about you?  What are your plans this weekend?

Any other headache remedy suggestions?

← A picnic and a challenge
The Slowest Mile →

18 Comments on “Only Slightly Crazy”