Even though my shiny new plan came on Sunday and I was eager to start it, I also had to rearrange the days.  In the first week!!  But Monday was scheduled as a rest day and I just couldn’t waste a day off of work to run outside.  So Tuesday’s easy 50 minutes were completed on Monday.   That worked out better than the gym after on Tuesday anyways- work ran late like it tends to after a 3 day weekend.

I thought about running on Wednesday after work instead of Thursday but the day just ran away from me.  Or rather, my brain did.   Every quarter work gives out an award that goes to a few individuals.   The people are nominated by their peers and then voted on by a committee.  It was something new that rolled out at the beginning of 2014 and is kind of a big deal.  The executives deliver the award in person and then a story and picture go up online.  Every person who earns the award then has a chance to earn/win the Presidents’ Award for the year.    I knew they were coming out to our location because a coworker had received one.    I had to be sneaky when I was scheduling the lunches because I wanted everyone to be there to see him get it.  They arrived on time and surprise!!  I received one too! Two of us!  Holy crap!  My brain left the building for the rest of the day, I was so excited. 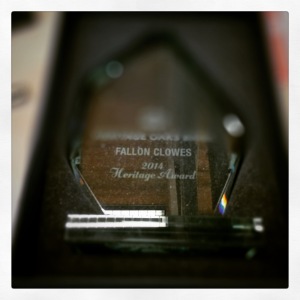 Ever since I was sick, I have not been sleeping well.  I have had coughing fits every night and it makes it hard to sleep.  According to my lovely Fitbit I have been averaging 5 hours a night.  Ouch.  After a few coughing attacks at work on Thursday, I decided that an extra rest day would be a good idea and skipped the gym.    Boo!

Friday was average as Fridays go and I allowed myself to indulge in one cookie at work.   The shocking thing came that night when I went to sleep- 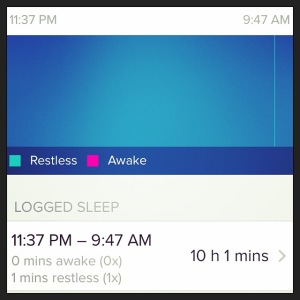 10 hours?  WTH?  I knew I was tired but come on!   I’ve also noticed that when I sleep with the Fitbit in my sock, it doesn’t measure restlessness very well.  Either that or I was unconscious.   You’d think that with all that sleep I would be raring to go today.  Not so.  After running my usual Saturday errands I came home with the intention of running sooner than usual.  Instead I took a nap.   Seriously?  Once I woke up I headed out for an easy 45 minutes.   It was not.  The whole 4.5 miles felt so hard.   I took plenty of walk breaks.

Which now leads me to being less than 12 hours from a 25K.  Commence the freak out.  Even knowing that I am predominately hiking it, I am freaking out.     What was I thinking?  Maybe I should just go to bed.

Ever been surprised (in a good way) at work?

Who raced today?  Anyone racing tomorrow?