And just like that February is over.  Blink and you missed it, I must have blinked.    I feel like I was just running in Huntington Beach but in reality that was 4 weeks ago!  So with that being said- here is my February recap- 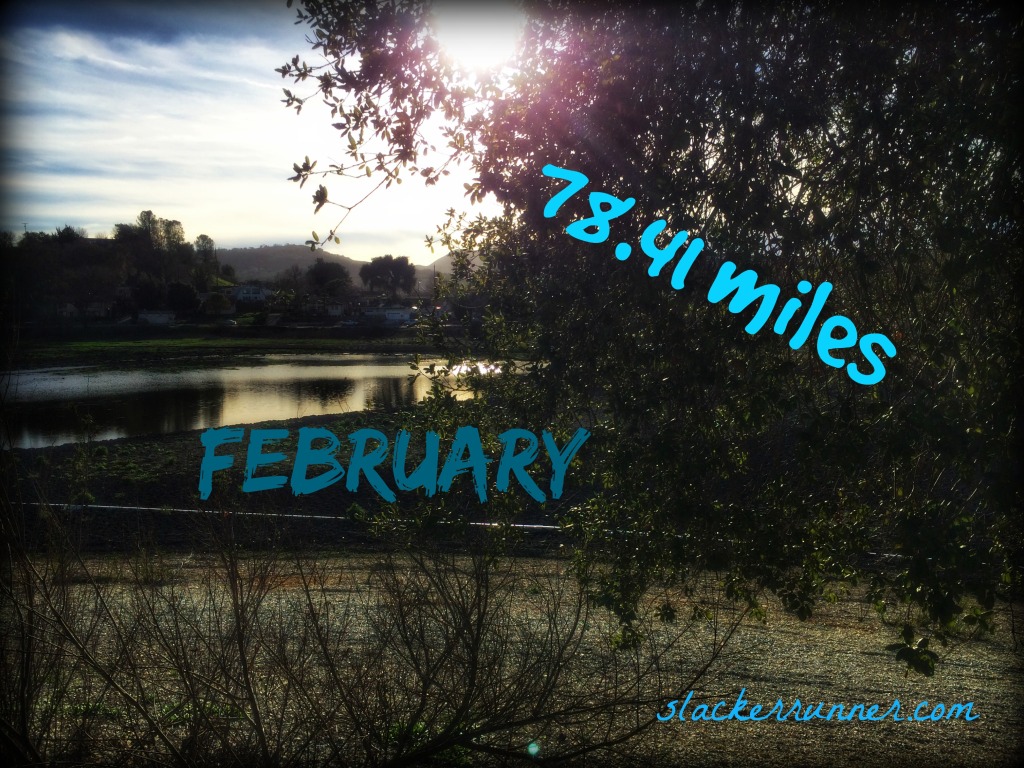 February was actually a pretty consistent month for me.  That said, the miles are lower than I would have liked but they’re still good.      I hit every run on my training plan save 2.  I missed one long run and one easy run by choice.  Some aches and niggles made me think that rest days would be a better choice.    Don’t they say that rest is training too?     Along with that, I cut this week’s weekday runs short, only around a 5k each time.      I know that those choices affected my overall mileage for the month.   I would have had another 20 or so miles, maybe.    I know I set a goal of 1000 miles in 2015 which breaks down to around 84 miles a month, I know I am behind.  However I am not going to break myself just to meet that goal.    See, I do have smart moments.   🙂

After last week’s increase in my leg issues, I was very hesitant to head out for a run on Saturday.    And random note, I have run in pants more in the last week than I have all winter.  Our neck of the woods got a little bit chilly.   Bear in mind, I find the 40’s to be cold.    Big baby over here!    I finally headed out around 3 ish to test the waters.    My first mile included 8 minutes of walking and clocked in at 13:00 but it didn’t suck so I kept going.   Things were tight but not painful.   Things loosened up a bit over the next 2 miles but I still knew things were off.  I was planning on doing my short route- 3.8 miles- but when I got to split point between that and the point for 4.5 miles I was stuck.   The road ahead was blocked off by fire trucks and police cars.  Well crap, so 4.5 miles it was.   I slowed down on the way home but didn’t feel too bad.    I admit to over analyzing every twinge and every step. I still have not decided what to do about Wine Country in 2 weeks.   I want to see how I feel through out the week.     I also have to figure out how to dress at work.  I have heels, boots and flats.  And by flats- I mean flat- zero support.  I wore flats 3x last week and was aching most of the day.  Heels one day and I rolled my ankle and stumbled into a cabinet- new bruises- yay!     I do that all the time in those particular shoes though.  I really should toss them but they are cute.  And here returns the less smart moments.    🙂  Oddly, I wore taller boots on Friday and it was the best my legs felt at work all week.   I may deal with the toe pinching of those boots if my hamstrings appreciate them.   🙂

How was your February?

Any shoe suggestions?  Anyone else as clumsy as me?