I was one of those people who never ran. You know the one- “I only run when I am being chased” type.   I was active in sports growing up- years and years of softball and tennis- but I hated running.  Why would anyone want to run?   I think I ran the mile maybe 4 times all through high school? Maybe, I was very good at getting out of PE.  😛

Fast forward to years later when I was working at Taco Bell.  I opened every Sunday so I was always headed there early in the morning- every so often I would notice that the main street in town was blocked off and people were running up and down it.  I couldn’t even contemplate the idea of a “fun run” so I had no idea what was going on.  It also never dawned on me that it was always the last Sunday in September that this happened.

Fast forward a few more years to 2007 and I had a career change.  That new career was big on community service.   I admit I was clueless but a coworker told me that a good way to ease into it was the fun run.  I’m sorry the what?   Turns out the HOB Fun Run was a big deal.   Last Sunday of September with races for all levels and ages. It was USATF certified, offered a decent prize purse and was flat and fast.  100% of race entries are donated to local charities.  There were 2 10k’s, 2 5k’s, a mile race, a kids 1/2 mile race, 75 yard dash and a mascot race.   I had no idea what any of that meant but they said it was easy to work an aid station and hand out water.  Ok, sign me up. 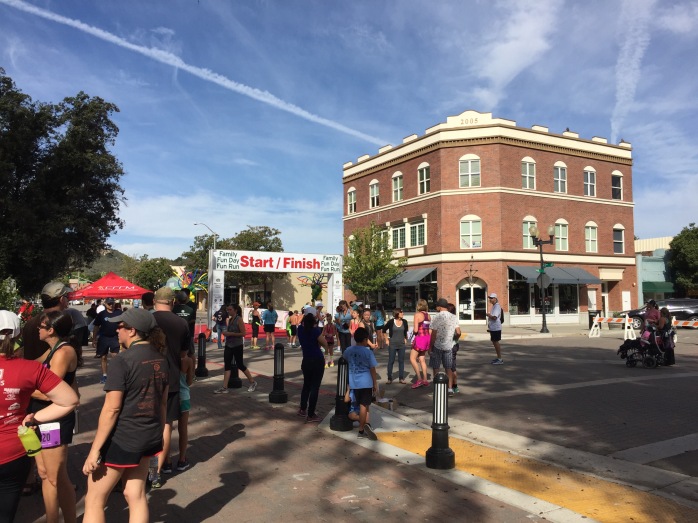 Holy crap, someone should have warned me that I was going to be cold!  I think my hands went numb.  I may live in CA but my town has crazy temperature fluctuations- I could have used mittens.    The first 10k was the masters division.  So yeah, I saw elites race before I ever had a clue what that meant.   They never wanted any water.  😉   The second 10K was normal people- except they were all still speedy.  The 10K has an unofficial time limit of 1:10:00-1:15:00 anything past that and you are running into the 5K start.  I didn’t know any of that out at the mile 1 aid station but it wasn’t a horrible way to spend a Sunday morning.

I worked the water station at mile 3 in 2008 and froze again.  2009 saw me working the aid station at mile 2- conveniently located in front of a grocery store and I went and bought us all donuts.   The runners were very jealous.    I was getting to know the stories- one man always ran in suit.   One year he had been running later after church so he just ran in his suit.  It became a tradition.   The mascot race was always hilarious. One year Smoky the Bear lost his pants.  The diaper dash was always adorable.   Plus the parents were always eager- the winner took home a washer and dryer.  😉

2010 was the first year I contemplated running.  My friend, NikeC was training for a marathon- I could handle a 5k right??   So instead of volunteering, I ran my first 5K.   It was hard and I walked more than I would have liked but I was back the next year.  And the next.  2012 was when I started volunteering at registration/ packet pick up on Saturday’s.  2013 saw my first double– I raced the 10k, quick bib change and ran the 5K.   Same story in 2014 with a dose of a massive asthma attack and another double race day in 2015.   I worked registration those 2 years as well.  Over the years, we got a little more organized running team wise and we now have a good showing-

Things have changed over the years-the race is no longer USATF certified.  I heard it was more of a pain in the ass than it was worth.  The course has never changed though so you know the distance is accurate.   So now there’s only one 10K and 5K.  Running hit a boom and the number of local races grew which made the number of runners dropped a little.   Doesn’t matter, it’s still one of my favorite (and most stressful) races.

Sunday will mark my 10th time participating in the HOB Fun Run in some way.   I will be working registration in the park on Saturday and toeing the 10K line on Sunday.  I haven’t signed up for the 5K yet but it’s 95% likely I will.  😛

Do you have any “tradition” races?

Ever run a double race?