The race starts and ends downtown.  I could walk to the start if I wanted to.  I have yet to do that though.   The course is a loop around the city park and down the main drag.  The 10K is 2 loops and the 5K is one.   It’s one of the few races I’ve ever run that is a completely closed course.   A kids 1/2 mile race, a 75 yard dash and a diaper dash are also offered.  It’s a race known for being flat, fast and still offers prize money.  The baby who wins the diaper dash wins a washer and dryer.

The 10K started at 8, so I arrived a little before 7:45.  I knew we were attempting a group photo with whoever was there before the 10k.   C and C-hub were there- race buddies!!!   I  haven’t run a race with them since last year’s fun run.   I miss my buddies.  😞 There were 6 of us for the first shots.  After the standard shot, the race photographer decided he wanted one of the back of our shirts.   It was the most awkward picture ever.  It’s a total butt shot and I was thankful I was wearing a skirt.  😏   The plan was to race the 10K and just have fun running the 5k.   I was still feeling my running funk so I had very basic goals for the 10K-

30 seconds to the start I realized I left my water in my bag with my bib change for the 5k.  Crap!   C rocks, I texted her and she grabbed it and tossed it my way when I ran past.   I felt like I started out too fast but I really didn’t.   However it was my fastest mile of the race.    My stupid headphones refused to play and then wouldn’t stay in my ears so I ran the first loop with them wrapped in my hand.    I stayed steady and tried to increase my turn over but it wasn’t happening.  I rounded the corner to finish lap 1 and was able to toss my headphones to C-hub.    I also saw my time at the 5K mark- 28:something- ouch.  Miles 1-3: 9:08, 9:23, 9:23 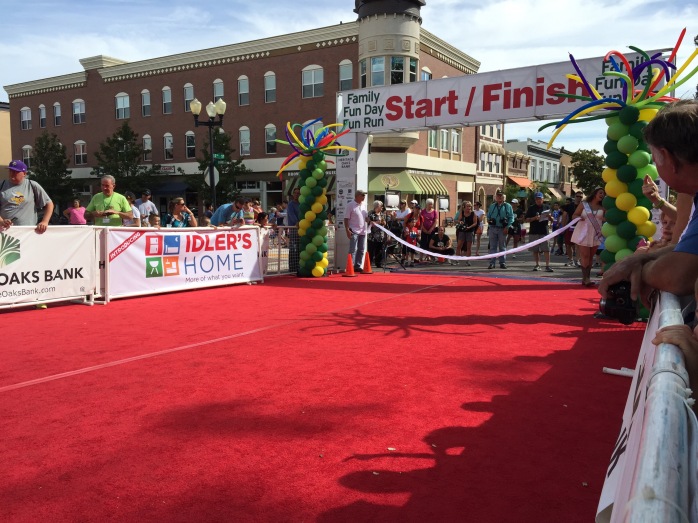 I tried to pick it up on the second loop but I just couldn’t find another gear.  I never felt like I was running hard but I didn’t feel like I could run any faster either.   It was odd but I had a feeling it wasn’t going to be a banner day so I was ok with how I was running.   Seeing a less than 30lb dog with little legs outrun me was a little disheartening though.  😃    Seriously, the dog ran the entire 10K with his owner and didn’t even seem phased.  Miles 3-6:  9:13, 9:40, 9:31

Goal B successfully accomplished.   Time for a quick bib change and the main group shot before the 5K.

C, C-hub and their daughter E were planning on run/ walking the 5K and I was going to join them.   C and E bolted from the starting line leaving C-hub and I in the dust.   We eventually caught up around .5 mile in when E need a walk break.  I could tell C just wanted to bolt so I suggested she and C-hub dash off and E and I would follow along behind.   I didn’t have to twist her arm.  😄

It was E’s first race so I let her set the pace.  We ran when she wanted to and walked when she needed.   There are 3 water stations along the course and you pass 2 of them twice so that means there are 5 water points for a 5K.   This was needed as it was very warm morning.   I made sure that E got water at each stop.    At the second stop, I hung on to my water cup for some reason.   That station didn’t have a trash can and I didn’t want to toss onto the clean street so I hung onto it.    I’ve never done that before but it turned out to be a good thing.  As we were coming up on the third water station I saw that no on was manning it anymore.  Where did they go?  There were about 100 runners behind us!   Once at the table, I realized there were no cups but there was still water in the 5 gallon jugs.   Good thing I held onto my cup!   I had E hold the cup while I hefted the water.   We were able to get water this way here and on the way back.    We continued run/ walking until 1 block before the finish and then it was a sprint to the end.   E hauled ass and finished strong!  Woo hoo!

We got our medals and headed for water.  We also met back up with C and C-hub.  They finished just over 30 minutes.   Awesome!   We chatted a bit while waiting for the kids races.  Seriously the kids are so stinking cute when they run.  Some of them were so enthusiastic they were literally kicking themselves in the butt.   The 75 yard dash was broken into 3 heats since there were so many kids.   Unfortunately I had to leave before I could see the diaper dash.  😦 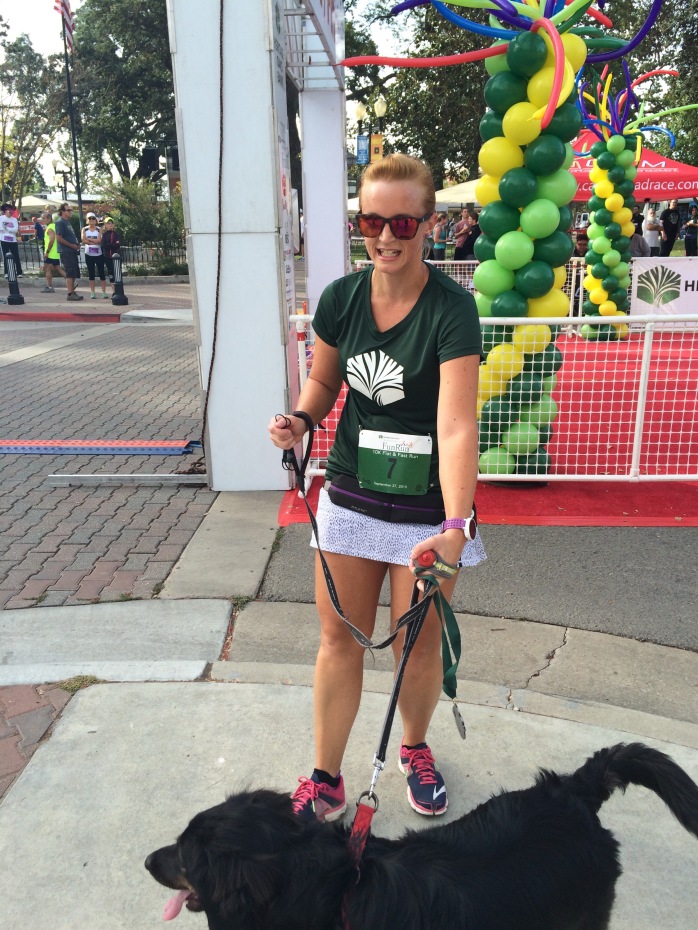 Overall, it was a fun morning and a great way to see a bunch of people I don’t see on a regular basis.  I miss my running buddies, hopefully it’s not another year until we race together again. 😃    Water station 3 snafu aside, it was a great race, and always runs smoothly.    I’m looking forward to next year.