Last week I jokingly said that the week felt like a truck had hit me.  Be careful what you say- this week a truck literally did hit me.  But more on that fun morning a little bit later.   So let’s get to it!  I started the week with a fun doctor’s appointment where I got to swallow what looked like plastic toys and get x-rays taken.  I would return later in the week for more x-rays.

Slog fest.  After having a few days with no running I was really looking forward to this run.  I had a seminar on Tuesday evening so I had to push the run up a day.    Monday was the start of a heat wave but it was only in the low 90’s when I got to the lake after work so I thought it would be fine.   I don’t know if it was the heat or if I was still feeling poorly but this run was rough.  I felt like I never even got started.   I wanted 4 miles but the idea of running past my car only to turn around was not appealing.  I called it when I hit my car.

So yeah, that run was apparently too hot.  I felt a heat headache coming on Monday night and tried to head it off by sleeping with an ice pack.  No such luck.  By the time I got off work Tuesday-late- I felt like my head was going to crack open.   I had no idea how I was going to handle a seminar.   Thankfully my mother wasn’t feeling well either.  Since I was getting into the seminar with her when she decided to not go I was thankful.   We went to pizza instead.  Comfort food for the win.  #paleofail

The week’s speed work was on tap.  However the events of the drive home changed that.   I was just a little too shaky after.  So comfort food again- a yummy quesadilla.  #paleofailagain

Predicted temps were 105* so I knew I was headed to the gym.   I knew I was going to have to make some adjustments to the workout due to my stomach but I was hoping to get as close to the plan as possible.  I took my warm up super easy.  Partly because it takes me forever to find my groove on the treadmill and partly because I was trying to ignore the fact that nature was calling.   I have to drink less after 4 pm, seriously.  Finally I just got over myself and used the restrooms before starting the intervals.  Might as well take advantage of the gym right? 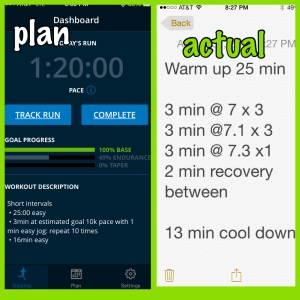 The plan called for 3 minute intervals at 10K pace.  I have no idea what my 10K pace should be- my PR is over a year old.  So I figured I’d wing it.   I set the treadmill to 7 which computed out to 8:57 a mile.  Ok not bad, I figured I would see how I did.   The first 3 intervals went well so I stepped the next 3 up to 7.1.  Which according to the treadmill is an 8:37 pace.   My math doesn’t agree with that but oh well.  The 3 intervals were going well but I could tell I was tiring by the 6th one.   So I did one last interval at 7.2.  Boom.  Just kidding, couldn’t help myself.  😃   I only managed a 13 minute cool down as my stomach cramped pretty badly.  But it let me complete the majority of the work out so I’m still calling it a win.   This was pretty awesome run.  I felt strong for the first time in months.  Now if only that feeling could stick around.

I had my last set of x-rays that morning so I was taking care of that before work.   Apparently life decided I hadn’t had enough excitement during the week and I was in an accident getting off the freeway.  I stopped at the red light at the end of the off ramp and the truck behind me didn’t.   😂    Seriously?!  I was in disbelief for a moment- did that really just happen?  It did- we pulled off the road and did the exchange of information bit.   He was super apologetic but I was kind of still in disbelief.  The irony of the timing of my previous post going up was not lost on me.   His all metal truck was fine and my car was drivable so we went our separate ways.

I headed to the doctor for my x-rays.  I also called work and let them I was going to be later then planned.  I then took my car to my dad to have him check it out before I headed to work.   I know he couldn’t see everything but as a former mechanic I knew he would know if there were any trouble spots.   My bumper is pushed forward, as well as a hole in it and my trunk is jacked up.  Other things sound odd but I am thinking optimistically.  I then started a claim with my insurance just in case before I finally headed to work.   I’m not sure how much use I was though.     😐

I spent most of the night before sick due to too many comfort food meals (pizza again Friday) and I woke up super sore.   I had really wanted to do my long run that morning but there was no way.   I tried to ride out some of the stiffness on the bike but no luck.  My stomach didn’t appreciate it either so I just decided on a rest day. 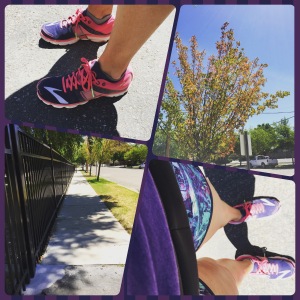 I slept like crap again, so I was late getting out the door.  I was still sore but thought I could run it out.  Ha!   Plus while the temp started in the 60’s it jumped drastically by the halfway point.  Like 20 degrees.  Really, I would call this more of a walk.  I averaged a 13:00 minute pace.   I was thisclose to calling my mom to come give me a ride.   Since I say a  long run is anything over 7 it’s not a complete fail but I am not sure if it was helpful.   Slow mile better than no mile right?

Overall, this week had its high points and its low.  Way more drama than I would have liked.  I need a vacation.   The last few weeks have been hit and miss with running.  If I hit a speed work out I miss the long run and vice versa.  I really wanted to hit both this week.  I didn’t say it in my last recap but that was a huge goal for me this week.   I feel liked I missed it again.  Yes, there were extenuating circumstances but I feel like I fall back on that excuse a lot.   I need to get out of my own way, but more on that in another post.  Now I have to figure how to structure this week as I have a 5K on Sunday.    That is freaking me out a bit.

That may be aiming high considering how much “comfort food” I ate this week.   My stomach did not appreciate it by week’s end either.    I know what I did wrong though so it’s fixable.   Lunch and breakfast is still on track.

Ever been rear ended?  Should I just stay off the roads?