Sunday marked 10 weeks to my next half marathon and 8 weeks to my next 10K!   If I didn’t have such high PR hopes (goals) this might not be so nerve wracking.  I have a 5K planned as well, but that is just for fun 🙂  I finally have some friends running with me!!!

Sunday I headed to the track to get in a few miles.  I ran a pretty good 5K and decided to try some quarter mile sprints.  Ha ha, that was funny. So on the first one after I restarted the Nike app, it said that I completed it in 1:42, so that would break down into a pace of 6:48 per mile.  Yeah, ummm, no.  I almost started crawling after that, I was breathing so hard.  I completed another one but not at that pace.  All in all, I ran 4 miles.

Then I went and helped my mother clean up and get the tennis courts ready for the new school year and season.   There was a crank (holds the net up) that tried to kick my butt, however, I had a hacksaw and I won!!  I then completed some really slow ladders.  I managed to do them right this time but very slowly, I had to count out the foot work!   But perhaps, I got a little more sun than I had anticipated, oops. 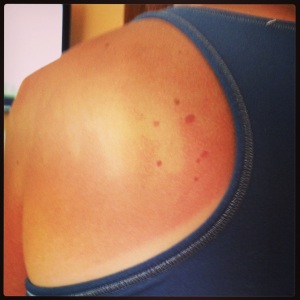 After work, I hit the park to get in a few miles.  Having run Saturday and Sunday, I normally may have taken today off, but I am having a girls night tomorrow, and I am planning on Eating 🙂 So had to get a few preemptive miles in.

Ever have one of those days where everything fits all wrong?  Yeah that was me today.  I set out from the car with the belt that I have been trying to break in.  Yeah, no thanks!  It was either riding up my waist or down below my but but managing to pull my shorts up at the same time.  What?  I began the run in perfectly respectable shorts that tried to turn into racing briefs.   Umm, Shalane Flanagan I am not.  So to anyone on the path tonight who saw way too much of my upper thighs, I apologize.   The belt was driving me so crazy, I actually stopped at my car at the first pass and switched to an armband.  Luckily, I keep lots of spare gear in my car 🙂

I pulled a nice 3.5 miles at a good pace actually. Which was all I could take, the sports bra was so not friends with my sunburn.

So Monday run done!  And good times planned for tomorrow, hope everyone else has something to look forward to this week!

Anyone else ever have wardrobe issues while running?

Felt a little under the weather this week but still spent some time in the dirt today.
Morning didn’t go like I hoped but I managed to get 3 miles in. Walking was all my stomach would let me do but better than nothing at all!
I paid for a race picture. Not because I look awesome but because @letswanderphotography did a damn good job of not making me look like an idiot🤣
Accurate.
I almost forgot #medalmonday!!!
I finished!!! One hill broke me.😂
Join 2,608 other followers