This may actually be my 15th attempt at trying to post this damn thing.  I tried numerous times last night and then again on my lunch today.  No luck.  WordPress and I have been having a tense conversation, mostly one sided, by me, with some very colorful language.

As Monday’s go, today was actually pretty good.  Got most everything squared away from last week’s mess, plus the computers were up and running.   I was sad to see just how dark it was tonight when leaving work.  No run tonight, busy getting ready for a long day tomorrow.  Driving to Upland with the tennis team. Wish me luck, I’ll need it.

This Saturday I did not have to work, so yay!   I had the intention to run some errands, go phone shopping with my mom, and get in a good run in the afternoon.

The errands were tedious, lunch was yummy, and the phone store was hilarious.   My mother had a droid which she loved and then hated with a passion.   She was ready for a new one and kept asking my opinion.  I have had an iPhone for years and knew nothing about droids, so I couldn’t really help her.   She claimed she hated iPhones but couldn’t tell me why.   So she did her research online and decided that she wanted the new Moto X (I think).  The phone store was slammed, I was very surprised by how freaking busy they were.   We talked to the representative there for a while before my mom said she would buy the Moto.  The salesperson replied that they did not have any and it would have to be ordered.  Uh oh.   The thing about my family is they have no patience.  When they want something they want it yesterday. My mother thought for about 45 seconds, looked at the sales rep and said “I’ll buy an iPhone.” I cracked up laughing.

So my mother was the brand new owner of an iPhone, I spent the afternoon helping her set it up and download all the apps she may use or need.    Then she and I went for a run/walk.  I have talked her into doing the Spooner’s Cove 5 mile with me.  Her first race!!!   She was tired so we walked together sometimes and sometimes I ran ahead and then doubled back.  I don’t know why, but I loved hills yesterday.  I saw an incline and thought I have to run that.  All in all it was a good 4.5 miles.   Also I took a few fall themed pictures- 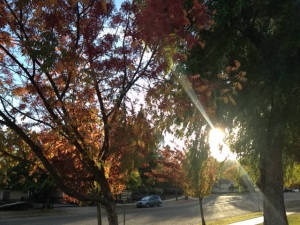 The plan of attack for today was to hit the track for some speed work.  I was thinking a mile warmup, 3 miles of speed work, and a mile cool down.   However the headache that greeted me this morning derailed that.  I still headed to the track hoping that running would ease it back.  Mile 1- no such luck.  Mile 2- still ouch.  Finshing mile 3, I still felt like crap but figured I would complete 4 miles with trying some sprints for the last mile.   Apparently I should sprint with a headache more often, my last mile came in at 8:47.  And I was done.  I stretched out and headed home to some cleaning and laundry.

I also had the New York marathon on in the background while doing chores.   That was a crazy amount of people!!! And some very impressive running.  I don’t know if I want to run in a race that big or if it kind of scares me. 🙂 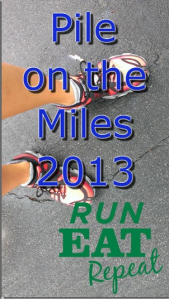 As for the November challenge, I chose to sign up for Pile on the Miles over at Run Eat Repeat.  I was torn between this one and The no excuses challenge at Running Bug.  I was also tempted by one I read about called No-Run-vember.  Got to admit that sounded tempting!  But I was good and chose to run instead.  🙂 So 3 days in and 8 miles in, I can do this!!!!

And now tomorrow is Monday and fingers crossed, the network and computers will be working again.  Also that it doesn’t take too long to fix the mess left after Friday.

I hope everyone who ran or raced had an awesome weekend!

Got stuck today.
New shoe day!!!
Feeling artsy, running slowly.
The bike doesn’t car if you don’t match right?
I needed a run that fast and hard with angry loud music to drown out the noise in my head.
Woke this AM and thought, ow, should not run today. But it’s a no work day- I have to run!