First off, thanks to everyone and the well wishes.  It was a great way to go into a race!

Today I took part in the first annual Operation Run, an 8 mile run put on by Amazing Surf Adventures and their Operation Surf.  I thought I had seen this run advertised last year, but I guess I made that up in my head, oops!  First time races normally make me a little leery but there were no fears here.   Check in was quick as no bibs were handed out.  Turns out the county has restrictions on “races” that may not apply to “fun runs”.  Who knew?   The start finish line was in a Gymnastics center parking lot.   There was also a huge American Flag on display- 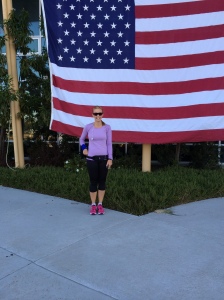 The announcer was amusing with the right touch of snark. Love it!  He was with Operation Surf and he handed the mike over to another man, wearing a Boston jacket from 2012! ( nerd moment).  He described the course, basically an 8 mile rectangle, watch out for traffic as no roads were closed.  He also mentioned that end of the race would involve zig-zagging though the parking lot?  Why,  because he knew that if us runners showed up for an 8 mile race, we would be very upset if it came in under 8.  So true! There were 2 aid stations along the course and Grizzlies monitoring every intersection.  Shirts and medals were handed out after crossing the finish line.  Official race times are supposed be online soon.  All in all, it was a very smoothly run race, especially considering it was the first year!   And the race shirt was great, even if it ran a little small-

It was 34 degrees when I left my house this morning so I dressed in capris and a long sleeve shirt.  I also had my gloves and an ear warmer.   I had a bottle with Gatorade and a few candy corns for fuel.  This would be my first 8 mile race, so I was trying to be prepared.  It never hurts to be a little extra prepared.   I got Mr. Nike going and then paused it for the National Anthem and the short walk to the start line.   And then we were off!  The guy in front of me and I almost plowed right into a photographer who thought it would be a good idea to take pictures from inside the crowd. No!!!

Miles 1-2.5 were a long slow incline.  I was hot about .5 miles in, oops.    Coming up on mile 1, I was sucker punched by Mr. Nike.  His voice comes and says “mile 1” ok good so far, then “20:32 minutes”.  Umm what?!  Guess when I thought I had paused it, I didn’t.   WTF.  Well that is not the way that you want to start off a race.   I had no idea what my first mile was and my average pace was just a guess from then on, based on the overall time.  Plus the distance was slightly off due to that little walk to the start line.  Ugh, every time Nike would give a status update, I just became irritated.  But I ran on.

Mile 1-3 seemed pretty good, warm but good.  I was tired but thought I had a decent pace.  Had to lose the over shirt by mile 3 and didn’t want to walk so I managed to get it off while running, very awkward.   🙂 After mile 2 we were off the main road and running the back roads in between wineries.  It was very pretty today, I should be used to it, seeing as I live in wine country, but today seemed prettier.  The first aid station was run by ROTC members, nice!

I rounded the corner for mile 3 and I was tired.  I felt like my crappy week had caught up to me.  Mile 4.5 was uphill and I caved.  I had to take a walk break.  I was frustrated because I had run 10 miles of my half before needing a break.  I walked to the top and told myself I was running the rest, and I was going to do it faster.  I think the slight downhill had affected my judgment.  But I kept running.

At mile 6, I was bummed that this wasn’t a 10K.   I had 2 miles to go.  I was tired and cranky but just kept pushing.    Ran passed the Grizzlies with their great signs and kept going.  Mile 7-8 was the longest mile ever, I hit the parking lot and really wanted to say screw it to the zig zag, I’m ok with 7.7.  But somehow, I had enough in me for an actually speedy finish.  I managed to pass up one of the people I had been pacing for that last 5 miles.  Woo hoo!!!  Even though Nike was all jacked up, I feel fairly confident in saying that I ran a negative split!!! How unlike me.

After filling out the finishing card, I finished 52 out of ?,  and picking up my shirt and medal, I tracked down the woman I had passed.  I didn’t want to wait for the times to go up, I wanted some idea of my time and I figured she finished nearest to me.  She came in at 1:17:11.  Seriously? Hell yeah!  Now I just want to see the posted times to confirm it.  Also the medal and race bag were awesome.

It was a tiring race, not course wise, mostly just me, but I felt like I pushed through it.  Plus it was a well-organized race for a good cause, our veterans. There were some amputee runners out there today and I was inspired by their perseverance and bravery.

I completed the day with a good lunch and a little shopping.  I then headed home for a last bit of Slacker-ness before work tomorrow.  Shout out to mom and her race photography skills- Thanks!

Anyone else enjoy a three day weekend?

How are we halfway through November already?

Felt a little under the weather this week but still spent some time in the dirt today.
Morning didn’t go like I hoped but I managed to get 3 miles in. Walking was all my stomach would let me do but better than nothing at all!
I paid for a race picture. Not because I look awesome but because @letswanderphotography did a damn good job of not making me look like an idiot🤣
Accurate.
I almost forgot #medalmonday!!!
I finished!!! One hill broke me.😂
Join 2,608 other followers