Yesterday was a glorious rest day.  It was a longer than usual work day, so that plus my tiredness from Monday and Tuesday turned into a rest day.   I won’t lie, it was pretty nice.   I still played nice with my foam roller but other than that no running or running shoes.  I did end up going up and down a ladder a ridiculous number of times at work.  We finally took down the last of the Christmas decorations; the garland strung around the exposed beams in the ceiling.   That turned out to be more of a workout than I had planned.  🙂

My plan called for 6 miles yesterday but just like the 8 on Tuesday, I made adjustments.   I swapped yesterday’s run and today’s rest day.   I was still not feeling it this evening so I ran 5 and called it done.  I think that a plan needs to be adaptable to the runner.  I could have forced myself to run the last 3 on Tuesday and the last 1 today but they would have been crappy miles.  I would rather have quality over quantity.   Which is kind of contradictory as I am trying to up my mileage, but I want to do it smartly.

Tonight started out a little stiff but just over a mile in, it finally eased up.   I wanted to keep it easy tonight but my feet must have disagreed- I kept punching the treadmill!  😦  Oops.  I made sure to keep my breathing even and if I felt like I was getting huffy, I would slow down.  I took advantage of those moments to drink water without spilling it all over myself.   🙂   NikeC showed up at some point and texted me that I had outrun everyone around me.  When I showed up, the treadmills were mostly full but I found one near the door surrounded by people who were just arriving and jumped on.  2 miles in they were all gone.  Did I smell or something?

I finished out my 5 and walked a cool down.  I then stretched before cleaning my machine.  Yes, I stretch on the treadmill; those bars sure are handy.  🙂  I chatted a bit with NikeC before heading out.  She’s running Surf City this weekend, woo hoo!!!  She’s gonna rock it, I know.  I then headed home for a nice warm shower and my roller.  I was also able to catch up on Supernatural while working on this post.  I was only distracted a few times.  🙂

Back to upping my miles,  I decided to try doing a monthly recap.  That way I can see and share what I’ve done- what worked and what didn’t.   Tonight was my last run for January, so here goes- 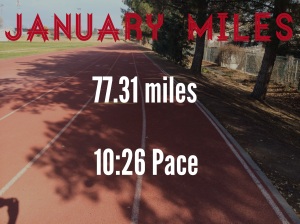 77 miles?!  Sweet, especially considering I took 8 consecutive days off when I was sick.    Looking at those numbers makes me proud but it also shows me why I am tired.  I went from a 30 mile month (granted it was December) to just shy of 80.    I would like to stay around this number of monthly miles but I am rethinking some things, got to work out the kinks.  I think I had a few good ideas while running tonight but any great epiphany had while running should always be slept on first.  Right?

Tomorrow is Friday, woo hoo!!!! How was everyone’s weeks?

How did your resolutions/ goals go for January?

Who are you rooting for on Sunday?