Where did this week go?  Seriously wasn’t it just Tuesday?   Now it is Saturday evening, and I feel unprepared for tomorrow‘s race.   I’ve picked up my bib, edited my playlist, and laid out my clothes.   Since I decided that a PR is unlikely with that last hill, what do I have to be nervous about?

Taper week has been completed, probably a little too well.  After Monday’s 10K, I headed back to the lake path on Tuesday,    I ran a good 4.5 miles.  Probably a little faster than I should have but they felt like good miles.   After that the week seemed to pick up speed.

I had a meeting Wednesday morning but when that was completed I was done for the day, woo hoo!!   Since I had to drive through SLO on the way home, I stopped by the Running Warehouse to exchange the handheld I had picked up on Saturday.    That thing drove me batty; taking the sleeve off was a pain and I decided to just exchange it.    Hopefully the Ultimate Direction handheld I chose will be better.   I then headed home to change and go drive tomorrow’s race course.  After getting home and changing, I checked Twitter and was ticked.    Apparently Jordan Hasay stopped by the Running Warehouse like an hour after I left!!!  Ugh!!!!  So in the past 2 weeks, Benedict Cumberbatch comes to SLO and I miss it, Jordan Hasay shows up and I miss that too 😦    Oh and Lady Gaga was nearby a few weeks ago too.   😦

Thursday I had a business mixer after work, but the night ended fun!  I met some friends for an early showing of Divergent!!!  It was really good, they did a pretty good job converting it to a movie.     I treated myself to In n Out before the movie, carb loading right?  It was so yummy but apparently I was still hungry because 20 minutes into the movie my stomach growled.  And it was loud.   So awkward.

Friday I had briefly thought about getting in a 2 mile run after work but decided against it.  Which turned out to be a good thing because I ended up working longer.  The carb loading rationale struck again when I ate a bag of chips.  😦  Today I woke feeling a little under the weather, I have felt like that for a few days now but I am in denial.  I keep telling myself that it is just nerves.  I worked this morning so I didn’t get to packet pick up until later.    It was quick and easy.    They are using a new timing system this year so I won’t have to worry about them cutting the chip off as soon as I cross the finish line.  🙂  The shirt is cool too.  This is the first time I have received a long sleeve tech tee.  And I love gray. 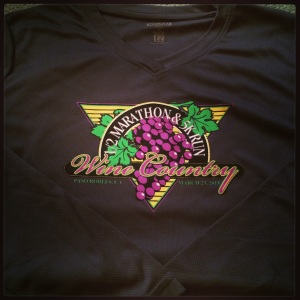 I indulged with a little nap today too.  🙂  Then I went through the swag bag to see what was there- 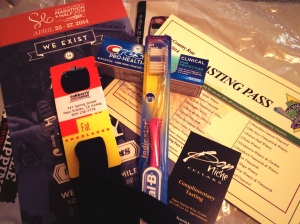 Now I am in my comfy chair relaxing.  Well trying too, I am still antsy for some reason…   I have gone through the list a few times and I swear I have everything ready.  I can’t shake the feeling that I forgot something.    Guess I will find out tomorrow.   now if I can just get to sleep at a decent hour tonight…

How was your Saturday?

Anyone else ever get that antsy feeling?