When I line up at the starting line this weekend, it will be for my 4th Wine Country 1/2 marathon and my 6th 1/2 overall.   It has been making me feel a little nostalgic.

I ran my first 5K in the fall of 2010 and then turned lazy.  I drove NikeC down to run the Surf City 1/2 in February 2011 and watching all the runners, I noticed that they didn’t look like the stereotypical runner.  Sure, some of them did, but a lot of them looked like average joes; like me.    I decided “I can do this”.  So I started “training” and ran my first 1/2 marathon in April of 2011. It was only my second race.  I say training lightly because according to an old training log, I only ran/ walked 12 times before that 1/2 marathon.   Oops.

On race morning I had no idea what I was in for but that also gave me the benefit of not being that nervous.  I broke so many running rules that day.  I borrowed NikeC’s iFitness belt that I had never used before.  I also ran in a cotton t-shirt and heavy tennis shorts.   I really had no clue what I was doing.

My only goal for that day was to finish under 2:30:00.  I paced my run by song intervals.  Run 1 song, walk 1 song, and so on.  I remember that C’s husband was running as well but I didn’t really know him that well then.  He passed me at mile 5 and I never saw him again.   This was also the point that I learned how the HOB Fun Run (my very 1st race) had spoiled me.  As I was running, I felt a looming presence behind me.  Sure enough, there was a semi truck coming up the road.  Holy crap, the roads weren’t closed!!!  To this day, HOB is the only race I have run with closed roads.   Truthfully much of this race is a blur.  I know that by mile 10, I was feeling pain in hip muscles that I didn’t know existed.  My feet also felt so bruised and that feeling stayed for almost a week after.    I think my interval plan had faded to run 1 song, walk 2 but I really don’t remember.   The course is all rolling hills, and the one at the end was steeper and I was so tired.  As I rounded the last turn to the finish line, a volunteer yelled out that I should run faster; that I only had a little way to go.  Didn’t she know I couldn’t move any faster?!   I didn’t meet my goal but I was proud of what I had accomplished.  NikeC and my mom were waiting at the finish line for me.

My running after that was hit and miss.  I ran a few more races that year and then winter started.   I returned to Slacker status.   In 2012 I signed up for Wine Country again.   I trained slightly better for this one, 26 runs before race day.  🙂   However they were all pretty short.  Then 2 weeks to race day, I woke with the worst stomach flu I can remember.  Like I was so sick I called in sick to work for 2.5 days.  This was the first time in almost 5 years that I had called in.  I managed 2 short runs over the next 2 weeks and still felt like crap.  To make matters worse, that lovely time of the month (sorry boys!) started the day before the race.  Race morning was wet and rainy and my ankle hurt.   Maybe I should have DNS’d but I headed out with the goal of just beating the previous years time, even if by just 1 second.

They changed the course from a loop to and out back.   I learned just how demoralizing out and backs could be.  I was barely at mile 5 when the runners were already passing me on the way back.    Waah.    I pushed on but I was miserable.  I had no idea what my pace or time was because my Nike+ app had malfunctioned and I didn’t realize until a mile and a half in.   Adding insult to injury, the clean up crew was picking up the mile markers on the other side of the street while I was on the return portion of the race.  Ouch.   Then at mile 12, I think I scared a race volunteer.  He was trying to be supportive and cheer us on, but he also said that it was 10:30.  The race started at 8:00.  There was no way I was running the last 1.1 miles in less than 7:50.  I burst into tears, loud caterwauling sobs and visible tears.   He had no idea what to do, I wish I could go back and apologize to him now.   The last mile was partially on a dirt path leading to the finish line, I cried off and on the entire mile.   Crossing the finish line, I realized that the race had started late and if I had pushed just the tiniest bit at the end, I would have hit my goal.  They also switched from medals at the finish line to wine glasses this year.

This race felt better than the previous ones.  Even though work had cut into my training, (changing offices, longer hours) I felt more prepared.   Nike+ worked fine this time and even though I went out faster than I should, I maintained for the first 8 miles.   I slowed as the miles went on and I remember being jealous when the girl in front me had the energy to jump in the air for the photographer at mile 11.   I managed a grimace.   I hit the final hill and crawled up it.  But at that point with what Nike+ was telling me, I knew I could walk and still get under 2:20.   And walk I did.  According to Nike, the elevation gain was 200+ feet in .15 miles.   I am not sure how accurate it is.  Maybe it wouldn’t have felt so rough if it wasn’t 12.5 miles into the race.  I then walked a bit more at the top to get my heart rate back down.   I was so pumped to cross the line this time. 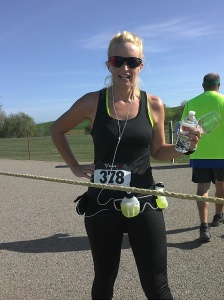 I drove the course today, both to refresh my memory and take some pictures of the course.  The beginning seems hillier than I recall and the middle stretch longer.    With the last hill, I would have to hit mile 12 at 1:45 in order to break 2:00.   While I would absolutely adore doing that, I am not going to injure myself to do it.   I have another 1/2 in 4 weeks, so I have to keep that in mind as well.  As of right now, there have been no course changes announced this year.  The race did announce that half marathon finishers get a medal and a wine glass this year.  Yay!!!  It’s the little things right?

Anyone have nostalgia for a particular race?