Back in January, it hit Facebook that our little neck of the woods was getting a Run or Dye race.    I swear my Facebook feed lit up like a Christmas tree.  C and I had always said that we wanted to do a fun, less based on pace race, and the fact that we didn’t have to drive far for this was perfect.  I had also promised her that I would run in a tutu.    When sign up time came around, there were so many locals signing up that the website actually crashed.   I probably should have taken that as indicator of how may people were attending this shindig.  But, Team Slacker (discount!) was able to register fairly quickly so I put it out of my mind.

When I picked up my packet, I found out that 8000 people registered.  What?!  That didn’t even seem possible.  Friday night before the race, I was texting C back and forth about where we were going to meet up, texting NikeC about what time I was picking her up and texting ME- ok, every time I type that I feel narcissistic, so from now on ME will be ML- about where we could meet up with her group as well.    The race was taking place in a park/ golf course across from a community college.  Parking was in a few a of the college lots.  It wasn’t enough.

After picking up NikeC nice and early in the morning, I decided to take the back way there.  It’s the same rural highway I drive to work everyday, actually.   I had mentioned it to ML the night before and she thought it would be slower, plus everyone seems to hate this highway.  Not me!  Halfway there, ML starts texting me about traffic and C is calling tell me that the left hand turn lane is backed up for literally miles.   Another plus about the back way- I got to make a right hand turn onto campus with no traffic!  Woo hoo!!  We were directed to a lot where we parked.  Then it was the walk to the actually event.  If you add in the walk to and from the park, we probably did 5 miles overall that morning 🙂

The crowds were ridiculous.  The highway patrol was out directing traffic so everyone could cross the highway safely.    I had hoped that the majority of people would still need to check in and get packets but judging by the sea of white shirts in front me, most everyone picked up early.    We finally tracked down C and her husband, from now on called C-Hub, R and T.   We could not find ML and her crew.   We were looking for them when we were just absorbed into the crowd and wound up at the starting line; which turned into a mini dance party and the first throwing of dye.  Part of packet pickup included a packet of dye, which everyone opened and started to throw around.

That stuff is cold!  I don’t know what I was expecting but it felt cold when it hit you.  There was a countdown and we were off!  Well kind of, even with a wave start it was crowded.  There was never really a time when there wasn’t a crowd on the course.  That was partially aided by the course being in a golf course, so we running the path.   A very incline-y path at that.  We did a lot of walking with some sprinting in between for the whole course.  Let’s call it fartlek training!    We lost R and T fairly quickly, so then it was just the four of us.  The first dye station was pink and not too bad.  Ran through it and continued on.   The stations after that were more aggressive.  One purple station was so cloudy, I couldn’t see the ground or my feet.

I love running with C and her husband.  They crack me up, plus C-Hub has great drill sergeant moments.  🙂  Then we hit a blue station. They were hardcore!   It seriously all went right down my bra, blech! It was starting to get a little sweaty too.  About a mile in, I was also feeling pretty stinky.  Which is weird because my mother insists that I don’t smell even after my half marathons.  I mentioned it to NikeC and she felt the same way.  Maybe it was something about the way the corn starch reacted with your skin?  Who knows?  All I know is that C mentioned it later too.

We kept trucking along, it really was great getting to run with everyone.  I got in some sprinting while trying to run away for C Hub, he didn’t think there was enough dye in my hair yet.  🙂  Walking up a little hill we saw turkeys!!!!  Don’t know why they were there but we had to try and get pictures of them.  I had my phone in a plastic bag so please enjoy the filter de plastic 🙂  It works pretty well, just kind of blurry sometimes.

By the time we went through the later dye zones, I was walking like a mummy, hehe.  My arms were at my sides, eyes closed and mouth squeezed shut.  It was fun and all but I had kind of had enough corn starch.  🙂   The last pink station was so backed up that we came to a stop while waiting to get through it.  C thought about skipping it, but C Hub wouldn’t let her.

There was one last color station after that and then we were running through a campground to get to the finish.   It ended up being after a single track stretch of trail and a little wooden bridge.   We also met back up with T and R right before the finish line.   The finish line was seriously anticlimactic.  We crossed the bridge and that was it.  No one was cheering as you came across and people were just milling about.  There was the color party going on in the middle of the field and some booths selling stuff to the right. That was kind of a bummer.  😦  NikeC and I stayed on the outskirts of the party while the others waded their way into the middle.    They had the crowd pleasing moment of everyone throwing their remaining dye packs in the air.  I tried to get a pic but was a little late-

Then it was photo time!!! 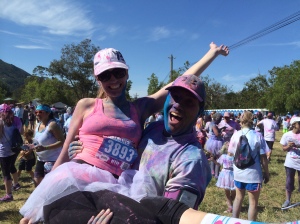 I texted ML, wondering where they were at on the course but they had already left 😦  We started the long trek back to the cars thinking about lunch.  I couldn’t handle the blue boobs anymore so I took off my white tank.  I was wearing  tanks which might be why I was so warm but I took that white one off while we were walking and shoved it down my bra.  So classy, right?  But I felt so much better after that.  The shirt actually worked pretty well at cleaning myself off as we walked back to the college.  NikeC and I managed to get pretty clean by the time we made it to lunch.  🙂

It was around 10:30 when we were walking out and we could see about 1000 or more people still coming as well as a long line of cars still trying to park.  The pre-race info has said that the last wave was at 11:00 so I hope all those people had the chance to run.  I don’t think they were adequately prepared for the amount of people who signed up.   Another beef- strollers.  There were so many parents with the kids and babies in strollers going through the course.  Not only was the path not that wide, did you really want your poor kid breathing all that in and getting it in their faces?

Lunch was awesome.  We hit Firestone in SLO because they have outdoor seating.  Yeah we were not the only people from Run or Dye to think of that.  It was packed!   The food was amazing though.  We had to laugh because we notice that us girls all ordered burgers and both guys were eating giant salads.  🙂  Then we all headed home where we were met with the task of trying to get clean.  It actually came out of my hair fairly easily which I had been worried about.    It did not come off skin quite so easily.    C and I texted each other later that our underarms still had a blue tinge no matter how hard we scrubbed.

Overall it was a good run.  It needed to be in a bigger location and a little better organized but it was the chance to run with everyone that made it great.   Would I do it again?  Ask me again when I am sure that there’s no lingering dye anywhere.  🙂