After Tuesday’s run debacle, actually it was more of a phone debacle than a run debacle, I was anxious to get over it.  After work on Thursday, I had planned on running there but the wind had picked up and I did not want cold ears.  Seriously, why do my ears get cold so easily?  I went to the park instead.  Once there, I found that it was super busy.   Well, there were cars everywhere but when I got on the path, there weren’t a lot of people. 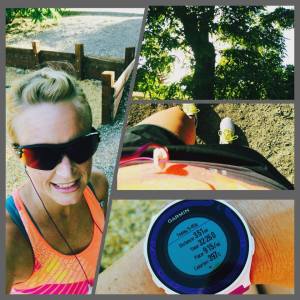 I set out for three laps of the lake.  With the construction still going on, I decided to walk that section every lap.  I figured with my luck, I would trip over an orange cone.  I tried to keep my pace as steady as possible while still focusing on my form.   Why is that so hard?    It was a pretty good run.  I kind of looked forward to the little walk break each time it came around.   I finished out my laps and checked my Garmin.  My pace was faster than planned and I didn’t feel like I was pushing too hard.  Sweet!  If only it be like that all the time.  🙂    There was some big shindig going at the park, so as I was walking out all sweaty, I had to walk through groups of people all dressed up.  Oops!

At work on Friday we had a sandwich potluck. We were celebrating the arrival of a new coworker and anothers birthday.  It was fun and a healthier option for a potluck.  Well, not counting the onion dip, that was just tasty.    Plus it wouldn’t be a Friday without my usual Friday breakfast-  healthy food fail.

I had 8 miles on the schedule for today.  I knew my mother and I were heading into SLO to go shopping early, so I figured I would be running them in the evening.   That was until we were shopping and running errands until 7:00 pm.  Does a marathon of shopping count?   Yeah, I didn’t think so.   We hit a few stores before lunch.  Lunch was Firestone as usual.  I enjoyed my usual kid’s burger with bacon wrapped in lettuce.  I’m such a grown up.  🙂 But guess what this grown up did?  She didn’t order any fries!!!  I think that’s a first, they have awesome fries.

That is when things got a little busy.  A Homegoods recently opened in SLO and we had been waiting to check it out.  So had the rest of the county apparently.  The place was packed.   Plus the store isn’t really set up for carts but you need a cart to carry your haul!  There is so much to look at, we were there for a while.  🙂   The line to check out was freaky long but actually moved pretty quickly.    I behaved myself and spent under 40 bucks.  From there, it was time for the Running Warehouse.

I did something that I have never done before.  I returned a pair of shoes.   I tried, I really did, to like the Adrenalines but I just couldn’t.  They felt like bricks on my feet.  Plus, they had so much cushioning that the first few times I wore them, I had troubles feeling the gas pedal.  At the SLO Marathon, I think I counted more than 10 people wearing them.  I wanted to grab them and ask why???? What was I missing?   I haven’t even worn them in a month.   I have been wearing my old pink Inspire’s even though they kind of hurt and my Waver Rider’s.    I felt kind of weird returning them.   The service was awesome as usual.   The only questions asked were what didn’t I like about them.  Then we discussed the replacement.  Thankfully, he said what I had been thinking.  My pronation is similar in minimum support shoes and moderate to max support shoes so I may as well go with what is comfortable.  So here is my shiny new pair of… Wave Rider 17’s.

Yep, second pair.  Now I just have to decide if I want to use these just for races (after breaking them in) or save them for when my current ones are worn out.  I was leaning towards the race idea but then I remembered that my next 2 races are on the beach.  They will get wet and dirty.  But no, they’re too pretty!

So all that combined with the usual Saturday errands turned into a Saturday of no miles.  😦   But there’s tomorrow right?

How was your Saturday?

Anyone have a race?

Should I save the shoes or just break them in?

← Should Have Said No
Dirty Girl Hike & Brunch →

4 Comments on “Different Kind of Marathon”

I admit, I may have a problem.
It’s been a long time since I felt like a “real” runner.
Set out for a long run yesterday which turned into a walk.
Happy Mother’s Day!!
Sometimes things don’t go according to plan.
I don’t think I’m cool enough for these shoes😍