I am so ready for this weekend.  I haven’t slept well all week and the tossing and turning is getting to me.  So bad, I took a 15 minute break yesterday, set a timer for 12 minutes and took a power nap.   It only slightly helped.   That being said, I was still looking forward to running after work.

Once we were done for the day, I was suddenly struck with indecision.   I had planned on running in work town, aiming for an easy 4 miler, but I didn’t want to wear pants.   For some reason I feel uncomfortable running in shorts in work town.  I am not sure why but I never said I was always logical.  🙂  I had both shorts and capris packed in my bag, so I chose the shorts and headed to the lake path.  Halfway there, I decided I didn’t want to run the path.  I don’t know if it was because I have run it so often lately or if it was lingering, uneasy memories of the lurker from Tuesday.  So I kept driving.   I thought about driving home and running from there but that didn’t sound enticing either.  I tried to think of another option.

I finally settled on a path I knew over by a friend’s house.  It was an out and back that I had run portions of at various times, but I had never run the whole length before.  Walked/ran parts during my first horrible 10K but never run the whole thing.   There’s a new portion now that connects to the original, so I was hoping that it would be around 2.5 miles to the turn around which would give me 5 for the day.  It would be uphill to the turn around, but I figured that would just ensure that it was an easy run.

I started off with a warm up walk, that was probably too short, before picking up the pace.  I felt pretty good going uphill actually.   Even though this was supposed to be an easy run I was looking forward to some faster running on the return downhill.    I haven’t run this path in well over a year but for the first time I ran the whole way up.  I was stoked but also tiring as I neared the turnaround.  I was also disappointed.  The turnaround came at 1.75 miles, boo.  😦   I turned right and ran until the sidewalk ended but it didn’t add a lot before heading back down.

Then it was all downhill, literally and figuratively.  I suddenly felt like someone had hit me with a tired stick.   I felt like I was running through water, and as a result crawling.  I actually took a walk break just before mile 3 because I just felt rough.  A break going downhill?  After that I told myself that the faster I ran, the sooner I would be done, so I just pushed on.  Hitting the new path section was the hardest, the sun was setting right in my eyes, the trees are still saplings so no shade, it felt like I was running in a desert.  I hit the street finally and was only at 3.75 miles.  Ugh.  The path picks back up on the other side of the street so I ran a little more until I hit 4.   And I was done.    Later I checked my Garmin and noticed that the elevation gain was only 127 ft, man, that’s barely a hill.  I think that first 10K 2 years ago really traumatized me, I remember it feeling so much bigger.  Ha! 🙂   I also noticed that my last mile was 8:40, sweet!

Even though I had some lovely sudden onset tiredness, I liked the path, I may run it again.  I just wish it was longer.  The path actually runs all the way to the other side of town, but that involves running under a bridge.   Ummm, no thanks.   I did it once with my mom and ML and I felt like we needed protection. 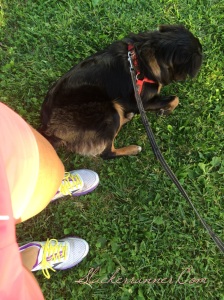 After another poor night of sleep last night and a busy day at work, I was looking for something low-key today.  I was also wishing I hadn’t wasted my 1 lazy day on Wednesday, stupid stomach.  So it was time for a 5K puppy walk!  I headed out with my mom and the puppy.  We were dodging graduation traffic, so we kept it pretty leisurely.    We had a scare though when some crazy large poodle rushed a fence, barking and growling at us.   The fence was useless because the poodle almost cleared it in one jump.  Meanwhile the owner is sitting there watching.  Really?!  Zoey never barked back, just looked at us like “what’s his trauma”?  I have to say the dog was actually pretty scary.

Now I am looking forward to a hopefully relaxing weekend.  A little shopping, a little reading and a not so little run.

What are your plans this weekend? Anyone racing?

Any crazy dog encounters on your runs?  I’ve been attacked before, that’s actually why I started carrying pepper spray.

6 thoughts on “A Little Indecison”