I have to say that I am liking Mondays as rest days.  Even when I didn’t do anything on Sunday to warrant it.  🙂 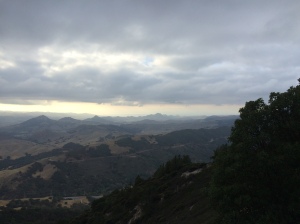 With that being said, I was ready to do something on Tuesday.  Just not too early.  🙂  The temperature dropping at night combined with a new set of flannel sheets makes it really hard getting out of bed in the morning.  But eventually I managed it.  I headed down to SLO for a little shopping and a good lunch.   From there my mom and I headed for a trail that she has done before with my dad. 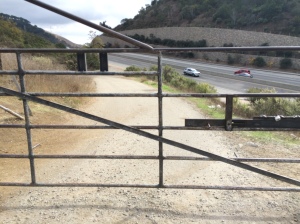 This trail is at the top of the grade, and you just pull off the freeway and park.  You literally have to climb a fence and gate to get to the path.  The fence is more for livestock than people and the trail sites actually tell you to jump the fence so I’m not that much of a rebel.  Still, I was spooked for 2 miles for some reason.  I knew there were other cars parked so there must be people on the trail but it was over 2 miles before we saw anyone. 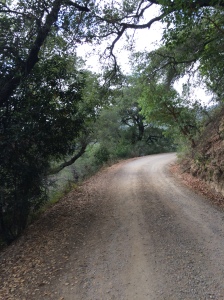 Now trail may be a misnomer.  While the sites claim it’s 4.6 miles up with an elevation gain of 1200’+, the trail is actually a dirt road.  A well maintained dirt road.  Why so maintained?  TV towers!!   Can’t lose access to those right?  🙂    Also I forgot my Garmin.  Fail!!   According to my Nike+ app which is kind of working again, it was 4 miles up with just under 1200′ elevation gain. 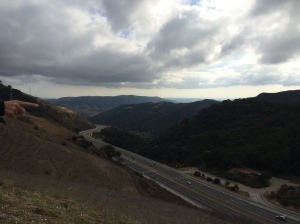 On the way up, there is a steep drop to the right as you wind up the hill.  You can see 101 but eventually the cars turn into ants and then you can’t hear them at all.   I won’t lie, something about the climb and the trees bordering the side, I was waiting for the something to jump out at us.   I am not sure what I was expecting more- a very real mountain lion or some mythical evil creature.  You know you watch too much Supernatural when you start cracking jokes about wendigos and Sasquatch’s.    Then a woman rode up behind us on a bike.  I shrieked like a little girl and jumped 3 feet in the air.   Seriously Fallon?!  Get it together! 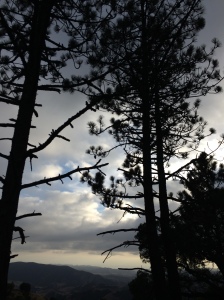 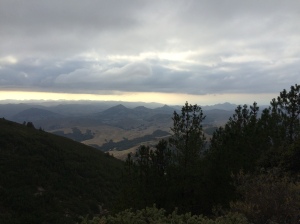 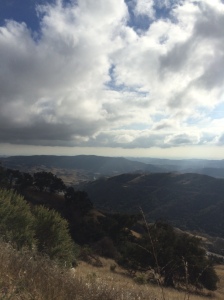 We power walked up and power walked down enjoying the views along the way and at the top.  It was overcast and chilly but still had great views.  From the top we could see all of SLO.   This put into perspective just how high up we were.  I could see all of the two most well-known peaks in SLO- Madonna and Bishop’s Peak.  They looked so small!  At one point on the way down I looked west and realized I could see the rock and stacks in work town too!   Kind of awesome! 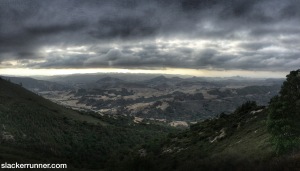 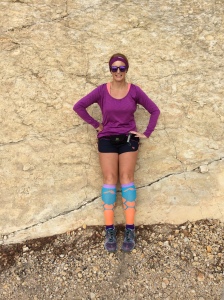 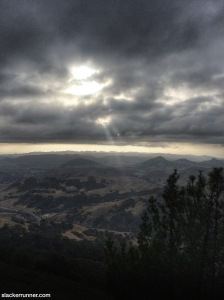 I wasn’t feeling well, so we kept the pace easy and stopped to take pictures and I usually didn’t pause the Nike app because it’s kind of a pain.  Even with that we still completed the 8 mile trek in 2 hours.  That’s not too shabby!  I would like to go back again and try running it next time.  And maybe keep my cool a little more.  🙂   I also need to remember my Garmin for more accurate data.  I am trying to figure out where the other .5 mile is.   There was a point when the trail went 3 possible ways right near the end.  Plus we lost the mountain biker for a while.  She ended up passing us on the way down.  She had to have taken one of the other 2 ways. 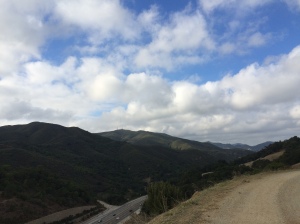 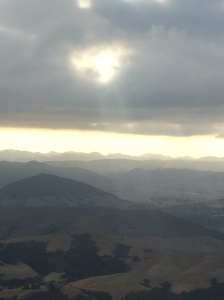 Ever jump a fence?  With or without permission?

Afraid of things that go bump in the woods?

← GREW From the Vines 5K- Recap
Rounding up the Scary →