Haha, but in all seriousness, this was a long week.  It also has had very little running so far.    Tuesday was taken up by prep and Wednesday the lovely test.    Tuesday was one of those times where I thought maybe I should be a morning runner- but nah- I like my sleep.   No solid food for almost 2 days and the horrible taste of the prep aside- the test was easy.  I went to sleep talking about my hair color and woke up in the recovery room.    My mother says I was a little hyped up from the meds they knocked me out with.   Apparently I reminded her of one of those funny internet videos.

I took my running gear with me on Thursday hoping I would feel up to running but that may have been a little optimistic.   I felt super achy all day.  I don’t know if it was a side effect of the test or the biopsies but I just hurt.   I figured the smarter thing to do was rest.   Which ended up working out because my mom called needing me to run to the pharmacy for my dad.  He went for a hike and came back with a ton of ticks!!! Yuck!    Also, my mom is skeeved out about the 25K now.  He had hiked part of the course and I know he never sat down.   But late January should be fine tick wise… I hope.  Yuck again.

Last Sunday, when I was shopping I treated myself to a little gift.   I have been feeling a little uninspired and truthfully a little fluffy, so I picked up a new activity tracker, a Fitbit Flex.  Not a Fuelband this time, come on I went through 3 of those in less than 18 months.  Have you noticed you hardly ever hear about the Nike trackers anymore?   I really considered the Garmin Vivosmart and Vivofit but I was really only interested in step tracking and sleep tracking.   Plus it was kind of a steal as it was part of a Christmas sale.    So far I am liking the app interface as well.

I really wish I could say the Fitbit was defective but I know I was just lying to myself.  I have worn it everyday since Monday and Monday was the only day I cleared 10,000 steps.   But even that doesn’t really count- it includes my 3.5 mile run.   Even if I cut myself some slack for Tuesday and Wednesday due to the test- that still leaves Thursday and Friday.  Did I mention I have a stand up desk?  Standing is not the same as walking!!!    I didn’t even clear 5000 steps on either day.  I don’t see how that is possible on a Friday, I felt busier than that.   Thursday, we were down two people and the number was still low.  Apparently I need to step it up.  Pun intended.  I already knew this but seeing it spelled out on the phone means no more denial. 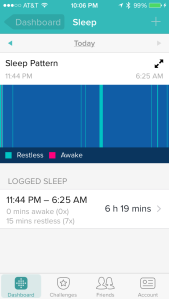 I’m all for being a Slacker but that’s just sad.  Oh, and as for sleep?  I’m averaging 6 hours a night.  Ouch.   The only thing I am successfully completing/ exceeding is the suggested water intake.

What stands out about your week?

Are you ready for Christmas?   I am so not.

Have you ever used a tracker? Thoughts?

17 thoughts on “Standing is Not the Same”