After 11 days off (stupid flu!!!) I finally got out there and did something!  I also made it to work on Thursday and Friday.   Wowza, Thursday was rough, I was exhausted.  No lie, I got through the day with a lot of Diet Coke.  But anyways, on to Sunday. 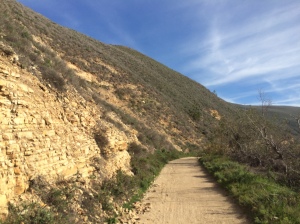 With the 25k 7 days away, eek, Sunday was my last day to get in a trail run/hike.   Plus I needed to test run my race day gear.  Because of the narrowness on the trails and the chance for ticks, I am wearing clothing that is a little more form-fitting than usual.   I also had a new hydration vest I needed to test.  The first one didn’t work out so well.    It didn’t fit right with water in the bladder and just didn’t feel like it was made well.  I replaced it with a new one a few weeks back but hadn’t been able to test it yet.  This one doesn’t have a bladder but has 2 water bottles in the front.  I stashed snacks in the back pocket and filled the bottles.   Success!  Well, except I haven’t figured out how to easily access my phone.  But I’ll work on that.  🙂 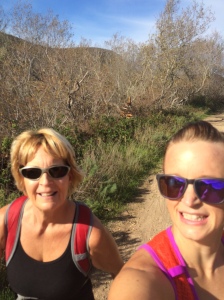 With me being sick and my mom being slightly hurt, we have readjusted our general time goal for the 25K.  Sunday, the plan was to head out to the race course and hike part of the last out and back.  According to the course map, that section is 8.4 miles.   We had troubles finding the right trail head but we were near another one that my mom had hiked before and really wanted to again.  The sign said it was 3 miles and it looked to be all fire road.   Fine by me, 6 easy miles was probably all I was up for anyways. 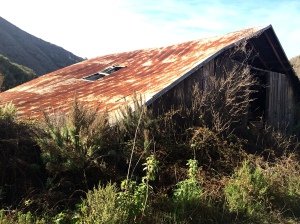 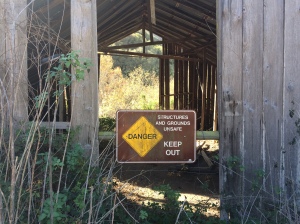 It was freakishly warm!  High 70’s and I was burning up!   Being a fire road, the trail was easy but I was still coughing a bit.   The trail ends near a worn down, beat up, old barn.  It was equal parts creepy and cool.    So of course we had to take a few pictures right? 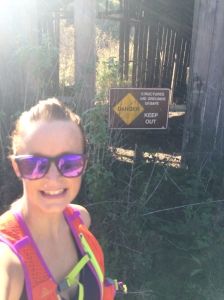 When we headed back, we passed a tiny, almost hidden single track trail head.  My mother insisted she had hiked it before so we should do it too.  Holy mother of incline.   We gained 700 ft over the next 1/2 mile.    Once we finally made it to the top, we found a picnic table.  We took a break and ate a few snacks.   And enjoyed the view.  🙂   We headed back down another way, hoping it was shorter way back.  Ha! 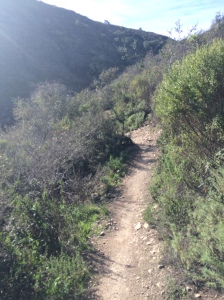 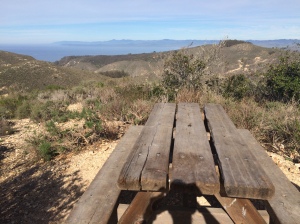 Since we weren’t positive what mountain we were on, I pulled up a park map on my phone.   It didn’t really help.  Or maybe I just don’t know how to read it.  Eventually we found our way down to a trail intersection.  According to the map, the right trail led to a dead-end and the left trail was the backside of Hazard peak.    We went left which meant we then had another climb in front of us.     My mom’s knee was just starting to hurt and we coming up on 6 miles and we weren’t even at the top of the mountain.   Our pace had slowed but we mad it to the top once again and enjoyed more views.  There were some mountain bikers at the top discussing trails and I overheard one say that the trail we had not chosen led to another fire road.  Really?!  That would have been so much easier!  Where were they when we could have used directions? 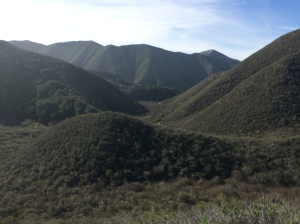 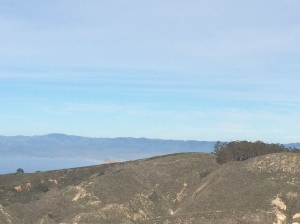 Then it was time to head back towards the parking lot, down the front side of Hazard Peak.  So at least we were able to check out the race course from that direction.  Down hill it’s not too bad, but I am wondering what the uphill will feel like after 8 miles.   Guess I’ll find out next weekend!  We finally made it back to the parking lot- 9.65 miles later.   We survived, haha! 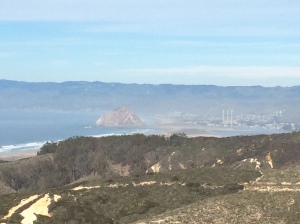 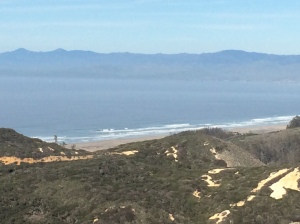 Even with getting a little turned around, going farther than planned,and getting a little sunburned, it was a good hike.  I don’t think I would have hiked that far without getting turned around but some coughing attacks aside, it was great to get outside and do something again.    Plus it was a good practice run for next weekend.  It gave us a general idea of what kind of time to expect.  Sunday’s hike was just that a hike and we covered 9.65 miles with 1400 ft gained and maintained a 17:00 pace.  Next week the race will add some speed on the downhills but a little slowness when we climb Valencia Peak, but that’s only 1.5 towards the beginning, so fingers crossed? 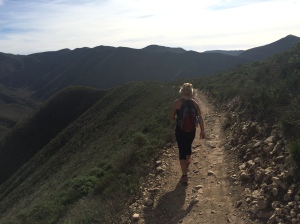 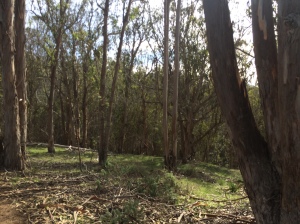 Sunday’s route took us from fire road to single track, packed dirt to loose shale and then loose sand.   The surroundings changed from scrub brush to trees then to a Eucalyptus grove.   The sun was shining and sometimes we could hear the ocean.  I’d call it a pretty good day!