Disclaimer: I received a pair of Aftershokz Trekz Titanium Pink to review as part of being a BibRave Pro. Learn more about becoming a BibRave Pro  (ambassador), and check out BibRave.com to review find and write race reviews!

I went from being a runner who could never run without headphones and music to one who really didn’t care either way.  21ish miles of the San Francisco Marathon was music free.    Quite a few runs are music free.   Part of that is because I realized I actually can run without background noise and partly because all my headphones drive me nuts.   I’ve lost count of the number of times I’ve been tangled up in cords or ripped them out of my ears.  Ouch!  My Bluetooth ones were still bulky and corded and I still managed to get into a tangled nightmare between the cord and my Camelbak one run.    I was afraid to try the non corded type of wireless headphones because I only wear them in one ear and you can’t exactly do that with a band wrapped around your head.  😛

Enter Aftershokz.   Wireless headphones that don’t fit in your ears.  Say what now?  The “ear pieces” sit on your cheekbones and you listen to the music via bone conduction.   All right, I’ve now entered the world of Star Trek.   But would it work?

It did!   The headphones arrived and they were easy to charge and pair to my phone.    They looked like they would be too small but once again I was overestimating my small head.   I wore them first on my stationary bike while watching Netflix.  They sounded great but there really wasn’t a lot of outside noise to distract me.  Time to run in them.   The website suggests putting the headphones on before your sunglasses and that is very good advice.  I tried it both ways and nothing seemed to fit right putting the headphones on after my hat and glasses. 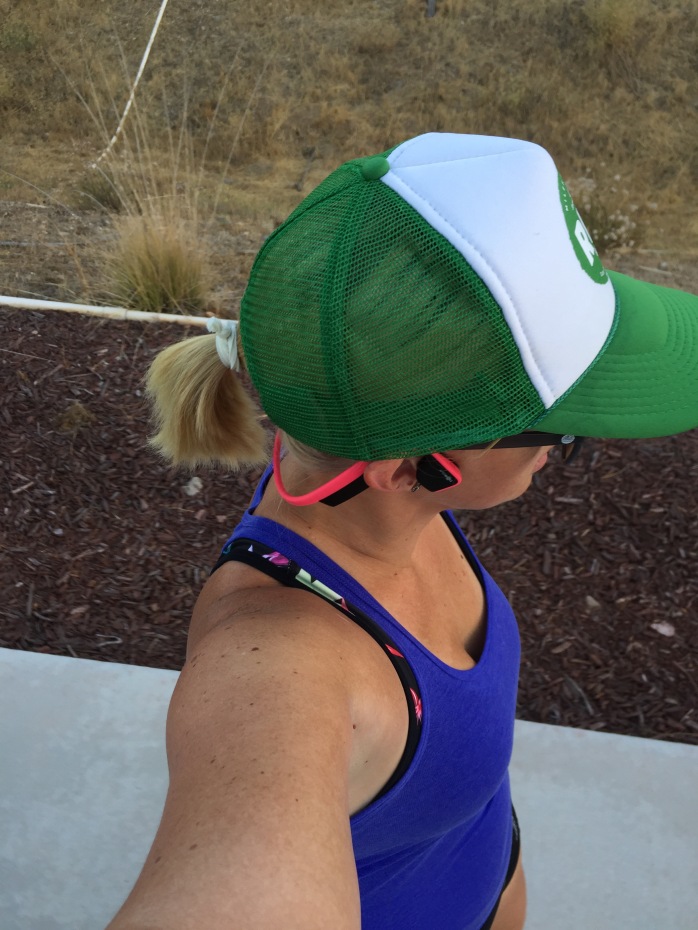 I could hear the cars around me, people talking and even the leaves blowing on the asphalt.  Actually that last one scared the crap out of me.   😛  It seemed so loud!     That said, I am having troubles with Siri recognizing my voice commands.   It might just be me but I still have to stop to text.    Also I believe I have maxed the volume out.    When I across the bridge, I can’t hear the music past the traffic noise.   But the bridge is a tiny portion of my long runs so that’s not really a big deal.   I also have yet to kill the battery- woo hoo!   And the oddball in me finds it amusing to listen how the sound changes when I yawn or pop my jaw.  I’m weird, I know.   😛😛

The sad truth is that you will know someone with breast cancer in your lifetime.  Actually, it’s more likely that you’ll know more than a few.   While typing this I can name at least 2 people fighting right now and I do not have a large social circle.

Aftershokz is teaming up with Bright Pink to both raise awareness and funds to fight breast cancer and ovarian cancer.  They are offering the Bright Pink limited edition version of their open ear Trekz Titanium Pink headphones- 25% of each headphones purchased from September 1 to October 31, 2016 will go to Bright Pink.  Going further, Aftershokz  will donate an additional 25 cents to Bright Pink every time #AwareWithPink is used on Facebook, Twitter or Instagram from September 1 to October 31, 2016.   We hashtag everything these days, let’s make it useful.   You can read more about the campaign here.

I am going to keep wearing my Trekz and I will using the hashtag come September 1.  It may not be much but it’s something and every little bit counts.

No questions today- share your thoughts and go hug someone you care about.