Disclaimer: Do I even need this?  I won entry into this race via a Facebook contest.  I would have registered for it anyways but winning is better.  😛

I love this race but it also stresses me out.  Why?  This race is still my half marathon PR…from 2013.   Sometimes I feel like I am getting farther and farther away from that race.    I knew going in this year that I was no where near PR shape and that was fine, I was just hoping for a solid race.   Coach Jenny with Ekiden Coaching and I had discussed using the race as a training run for the Harvest Marathon half and we were both on the same  page of aiming for a 2:10.  It sounded a little ambitious as most of my 13.1’s this year have been plagued by a variety of issues but I was hopeful.   While my marathon training had little speed work I was hopeful the distance training would help.

Then HOB Fun Run happened and I hurt like hell after.  Missed 2 runs due to leg pain, stopped sleeping because well, life and received bad family news.  I chucked all time thoughts out the window and just hoped to finish.  When my mom dropped me off at the race start I told her to not even look for me before the 2:30 point.  City to the Sea is a point to point so logistics can be a little tricky.  This year my mom decided she would just drop me off, kill time, pick me up and then we would go to lunch.  Thanks mom!

Pet peeve- the race had a 7AM start time.  I got like 2 hours of sleep the night before and was feeling a little nauseous.  The dang thing started 10 minutes late!

And we were off!  I had placed myself near the 2:30 pace group but I lost them fairly quickly.  Oops.   I tried to just keep it steady but it was only mile 1!  Miles 1-5 are fairly flat to downhill so I tried to not be crazy.  I felt something flapping about .75 in and looked down to see my left shoelace was undone.  Again?!  I pulled off to the side to tie and once again it was like I forgot how to tie my shoes.  Once fixed I ran on.  Damn, my calves were getting super tight.   Just keep running…wait, now my other shoe was untied.  What?!! Again, I pulled to the side to tie my shoes.    Then I ran on.  Until I pulled to the side to stretch out my calves.   Less than 2.5 miles in and I had stopped 3 times.  Probably not a good sign.  😞   I kept going but my lower legs were getting super tight.   I hate flat routes.  I took my first walk break at 3.5 miles trying to shake the tightness out.  Between the slight downhill and the slant of the road, my legs were screaming.   I knew there was a hill coming soon and I needed it.

We were off the main strip in SLO, under the freeway and onto a side road.  Hills!!  I never thought I would be so excited to hit the hilly portion.   But the first hill did exactly what I wanted it to do- the calf tightness loosened almost completely and I didn’t really notice it the rest of the race.   Woo hoo!  My stomach cramped in a very bad way partway through mile 7- walk break!   Bummer was the slant- the road was super slanted and something about it aggravated a muscle high up in my right butt.  I have no other way to describe it.  That in turn tweaked my right knee.  While things didn’t hurt, they sure didn’t feel comfortable.

There was a decent downhill in mile 8 as we ran into Avila and I was feeling good so I picked up a tiny bit of pace.  Then we rounded onto the Bob Jones trail and I just told myself to enjoy running through the trees.   I also ran in the dirt alongside the path to take some of the pounding off my legs.  I had felt a slight twinge from the troublesome left shin area and the butt issue was still around. 😛  Once out the trail we headed for Avila Bay drive which thanks to last year I knew to expect a good size hill.  I told myself I could take a walk break if I ran halfway up.  Success!  So much better than last year.   Rounded to the corner to another hill and we were into Pismo!  And the temp jumped about 20 degrees.  Ouch.

I wanted to be singing the I’m almost done song but instead I was having some GI issues.  My stomach had decided to be pissed off- seriously?!  From then on it was run until I cramped then walk until it eased.   Grrr.  During one of my walk breaks I noticed someone familiar pass me.   I wasn’t sure but I hollered Bix anyways- it was!   Bix was my very first race buddy- we ran a few races together years ago.  Until I convinced her to run Firehouse 5K with me without knowing how brutal it was- she never ran with me again.  😛  This was her fist half marathon!  We chatted a bit, discussed how the slanted roads were killing us and I warned her another hill was coming around mile 12.   We separated then but it was cool seeing her.   I did my run/ walk thing until the very end.  I swear this race has the longest last .25 mile.  Every single time I run it, it drags on forever!  But finally, the finish line was in sight! 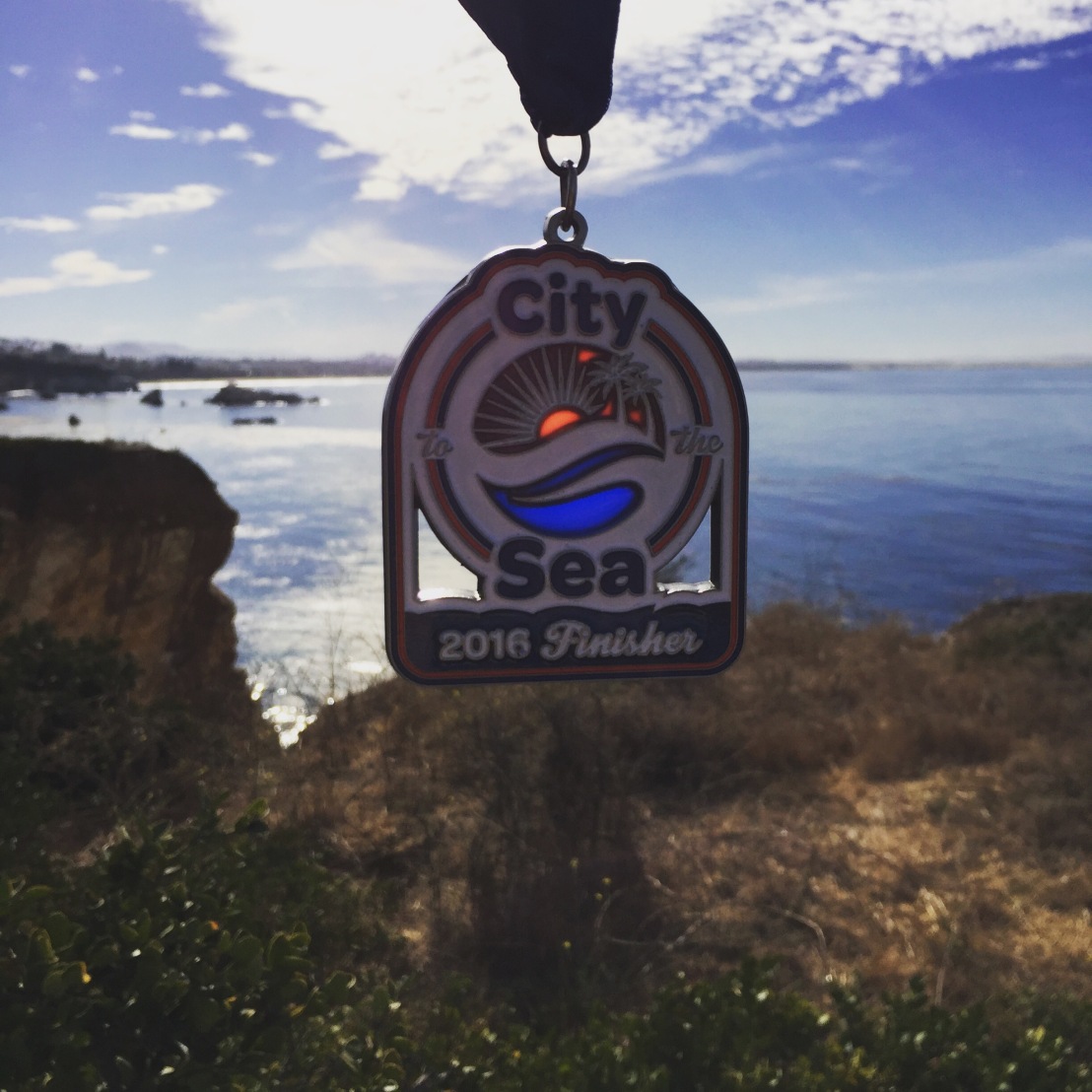 Well, that’s not too bad!  Actually it is my fastest half marathon finish this year!    There are a couple of points where I know I lost time but who’s to say I wouldn’t have lost it somewhere else.   The shoelaces thing drives me crazy though.   I never have that problem but now I have at the last two races!  Grrr.

Once I crossed the finish I was given my medal and then a tumbler and then a sticker.  Hey, that’s new!  Kind of helps make up for the tiny shirt.  😛   I got out of the chute but hung around as I wanted to see Bix finish.   Woo hoo! 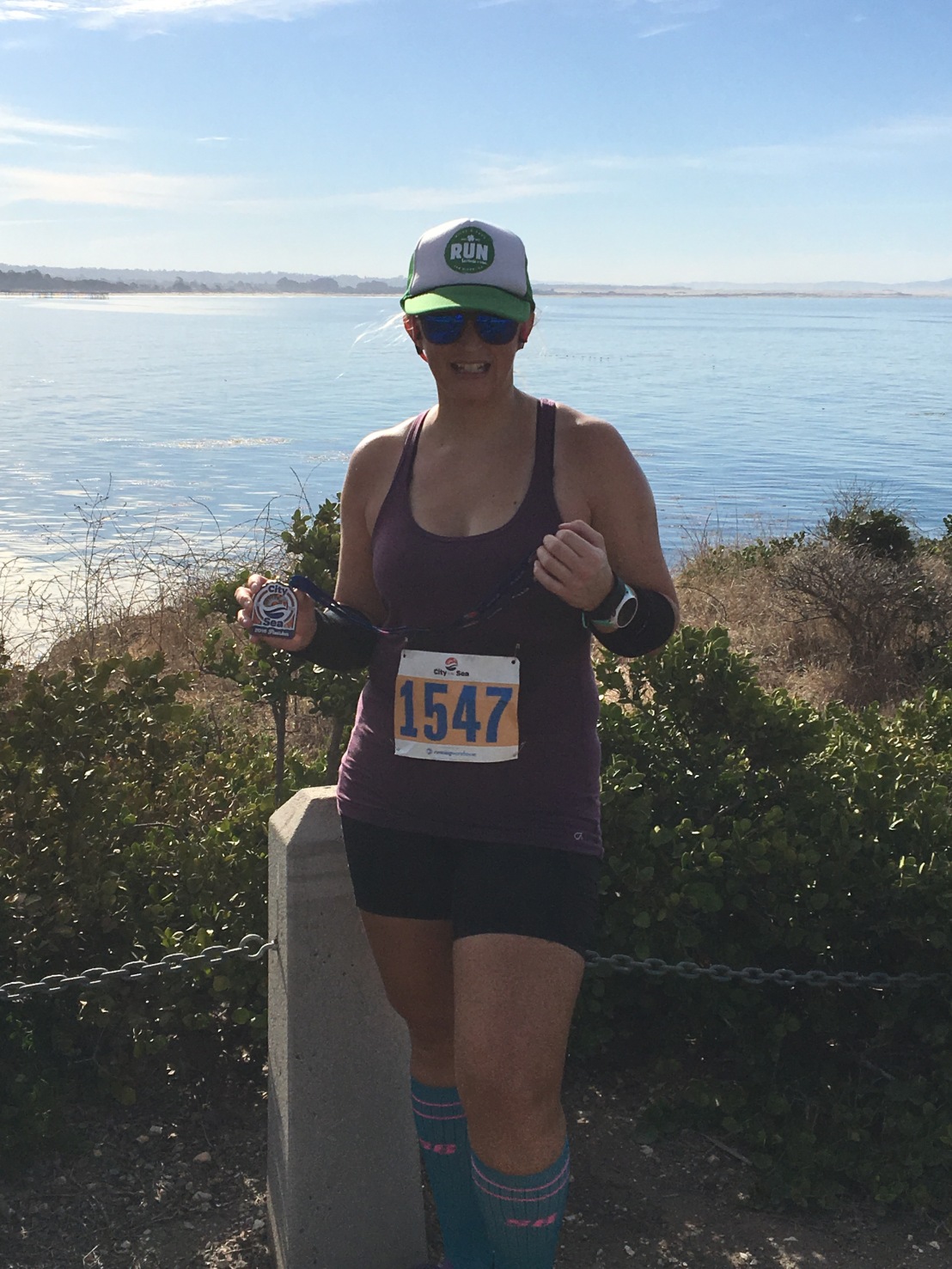 I was still feeling a little green so I met up with my mom and we just got ourselves out of everyone’s way.  I got myself under control and we headed out to find a yummy lunch.

All in all, I would say this was a solid race.   I was way more consistent than I thought I would be.  I won’t complain about being faster than I figured- neither would my mom- she’d waited long enough.    That said, I believe I ran the best I could for where I was at the time- both mentally and physically.  I wanted to run a good race, one to clear away the lingering issues with my other halves this year. I wanted to run a race that would help me dust the cobwebs in my head.