Since the 25k is all trail, I gave myself some wiggle room in my training plan.   I can sub a climbing hike in as one of the longer runs.  So with that in mind, my mom and I headed out early Sunday morning to hike Cerro Alto.  We had last done Cerro Alto in January of 2013 and I remember it being a climb but pretty easy. 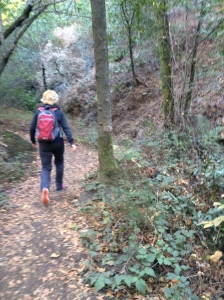 Either my memory is seriously faulty or I am completely out of shape, that climb kicked my ass.   Maybe my legs were tired from the previous day’s 5 miles or I was just tired but man that uphill seemed to go on forever!  In reality the hike we chose was 3 miles up to the top of the mountain and 3 miles down.   According to my Garmin, we gained 1700 in elevation.  However my Garmin crapped out for a 1/4 mile on the way up and 1/4 mile on the way down, so who knows.    The trail is measured fairly well and we have done it before so I know it should come in around 5.9 miles.  I never could tell where exactly it was that my watch had troubles, I was paying more attention to where I was putting my feet but I know it was after the 1.7 mark, because it was dead on until then. 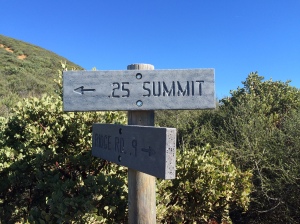 My mom and I kept pace together and power walked/ hiked up.  I honestly don’t think I could have gone any faster though.  In the end we got to the top in 58 minutes.   Which we were both kind of butt hurt about.  But looking at last years time, I noticed that we were 10 minutes faster, so woo hoo!   Did I mention that my mom wants to run the 25K too?  Well, hopefully. 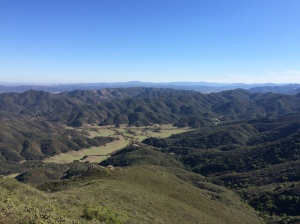 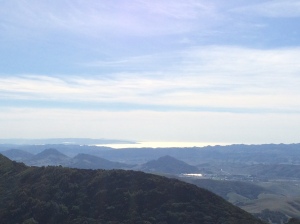 After hanging out at the top a bit- and of course taking pictures- we headed back down.   The views were amazing, and the skies were clear but the top is super windy.  You get cold really fast.  No one really spends too much time at the top, as opposed to Valencia Peak where people often eat lunch at the top before heading back down.

Coming down is where things got sketchy.  We were looking to increase our pace and get a good idea of what we could maintain for the 25K.   About 1/4 of a mile down, the trail narrows and gets rocky and even more uneven.  You really have to watch where you put your feet.   At some point my mother stepped wrong coming off a rock.  Not sure exactly how it happened, but she went to walk ahead, froze and let out a 4 letter word.  Uh oh.   Stretching out and shaking it out didn’t help.  Every other step down the mountain was accompanied by pain and some colorful language.  I felt bad that I couldn’t do anything to help but also bad because listening to her was kind of funny.   She later agreed that she probably sounded interesting to anyone else on the trail.   But hey, at least we weren’t the 3 college age girls stopping to crack open beers at the mile 1 marker at 11 in the morning.  Nothing wrong with the beer but get to the top first! Or better yet, get to the top and then back down first.  Every mountain we’ve hiked so far has had memorials on it.  And the news frequently has stories about hikers having to be rescued from the local mountain trails.

Even with my mom being in pain, we were able to get back down the mountain in about 45 minutes.   Not too bad considering she was limping.    In fact, that was the only thing marring a great hike!  Unfortunately, she couldn’t rest just yet.  She and I then moved on to SLO to do some shopping while waiting to meet my dad and brother at Olive Garden for dinner.   I was treating my parents for an early birthday dinner.  Their birthdays are only 2 days apart in December.     I told her to make sure to RICE once home and take it easy the next couple of days.

I meant to get this up Tuesday but time just got away from me.  Have a wonderful Thanksgiving!

Anyone running a Turkey Trot?  I wanted to but the nearest one is an hour away and that just won’t work on Thanksgiving.  😦

Gone on any hikes lately?