I mentioned in my previous post that this week is inspection time at work.  I thought I was prepared but what I was not prepared for was for him to show at 8:05 on Monday morning.  Seriously?!!?  I hadn’t had my coffee or my soda; I was in a sudden panic that I hadn’t crossed my I’s or dotted my T’s.  Aargh!!!!   By the time the day was done, I was just stressed and cranky.  I needed to run but I knew it wasn’t going to be awesome; my brain was tired.

I may have been stressed but I was so excited to take advantage of the time change!   I changed after work and headed for the lake path that I haven’t been able to run since the time changed last year.    My commute is a narrow two lane highway going through a canyon which is prone to rock slides.  The road has no shoulders, blind corners and is heavily shaded.  Seriously I think my hips are bigger than the “shoulder”.  The speed limit is 55 but most treat that as a suggested minimum.  Imagine my surprise rounding one of the corners to find a man running with traffic wearing black.   Seriously, dude?!   I get that you want to make the most of the extra daylight, but this is not the road for it! 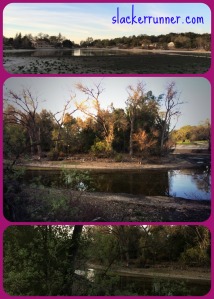 Once I arrived at the park, the weather was amazing.   I was aiming for 5 miles.  The path is a little over a mile around so I was hoping that 4 laps would be 5 miles.  That would be perfect, right?  Not so lucky.  Lap 1 came in at 1.18.     Lap 1 included my warm up but I could tell I was sluggish.  I was ok with that because I just wanted to run.    I was also a little sore from Saturday’s long run, wearing new boots all day hadn’t helped either.

Miles 2 and 3 were a little rougher than I would have liked; this trail is flat after all.   I feel like it was just after mile 3 that I settled in.  Mile 4 felt good and 5 was better.   Since I was on the backside of the lake when I hit 5 I kept running until 5.5.  I figured that still gave me a quarter mile to cool down before hitting the exercise equipment that I use to stretch.   I didn’t have any real goals with this run, just to enjoy the weather and the path and run off some stress.  Mission accomplished! 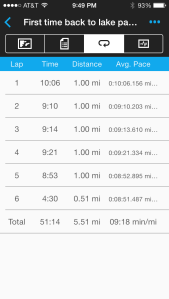 The lake was not as low as I thought it would be.   We still desperately need rain but the ducks and geese had some water.  There were plenty of people taking advantage of the weather as well.   I saw other runners, walkers and plenty of dogs.   Some were running solo, some with friends.    Everyone was friendly too.   I had a conversation going with a guy as we passed each other on laps.  He was out walking and saw me pause to take pictures.  I told him I needed a little break.   😛     I also loved that there were 3 guys who looked like they had just come a jam session with their garage band doing laps.

Today, I had to remind myself that rest days count as training too.    The weather was awesome again.  The inspection is still going on and I am discovering the meaning of stress sweat (TMI?).   I have been through so many of these before but this one just seems intense.    Leaving work I had to go return the previously mentioned new boots.  They ripped yesterday, classy right?    Then driving home, I passed no less than 9 people out running.   Against traffic on wide roads, yay!  I was so jealous.   But rest is good, plus I had classwork to do.  😦    Besides tomorrow is another inspection day, more stress to run off!!!

I am thankful that the extra daylight brings the lake back into play.    It is outside and flat, both dirt and paved.   More fun than a treadmill but better for my ankle than all hills.   It also brings me back to be being a 3 town runner.  I don’t know why, but the fact that I can run in 3 towns on a weekly basis just makes me smile.  🙂

I am 11 days out from the Wine Country Half and we are officially 46 days away from SLO Marathon.  I am so excited for both but I am getting nervous.    I still have a discount code for the SLO Marathon– anyone want to come run with me? Or faster than me?  🙂   Check out the amazing town and people too!  Check out this bling for SLO Marathon–

Who is ready for hump day?

Anyone taken advantage of daylight savings yet?

Am I the only one who has formatting issues?  Thanks WordPress, thanks.

9 Comments on “Loving this Light”