In keeping with the “get some rest’ theme, when work ran a little late on Monday, I kept my running gear in the bag and just headed home.   Sorry Garmin.     On Tuesday, 4 days off were making this Slacker feel a little lazy and a little puffy  😦    I went to the lake path for 3 easy miles.     This runner lies.  I either tell myself I am going to do an easy 3 and then do more or I tell myself that I am going to run and then don’t.    This night, my easy 3 turned into 4.5 miles followed by a cool down walk.   I did keep the pace relatively easy and took a walking break or 2.    I felt a little sluggish but that’s too be expected after 4 days off.   Plus I am still trying to work out the inhaler.  I am supposed to use it before running but I noticed it takes an hour before I notice anything even slightly different.    I need to remember to use it about a 1/2 hour before I leave work.   It felt good just be running, though. 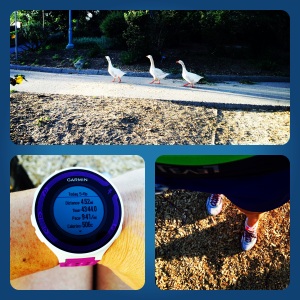 Oddly my left ankle felt a little cranky during the run.  Which is leading me to think I forgot how to squat.  I used to do squats every single day but when I was having left leg issues back in February I took a break.     This past week, I was having an attack of vanity and noticed that my butt isn’t where it used to be (such a girl thing) so I started the daily squats again.  Aaaannnd, my ankle hurts.   Hmmm, think it’s related?  Ha!  So maybe no more squats until after next weeks half marathon.  And I should probably try wearing shoes too.  🙂

Today, I had planned on running but a late doctor’s appointment and the almost 90º temp at my house after 5:00 put a kibosh on that one.   Plus I had to get to Target before the pharmacy closed to pick up a prescription.    My appointment today was a follow up to last weeks’.  Apparently I have been a fighting a lingering infection for the last month or 2.  Oops.    So now I am on antibiotics.   Which I will be on for both of my upcoming races.   I am still cleared to run; I just might not be at my best.    Which in one way completely sucks, but it has a glass half full side to it to.  Thanks for taking the pressure off Doc!! And the nurse who took my blood last week was a sadist!  This is my arm a week later-

My race this Saturday was never going to be a PR anyways.   When I ran this race last year, it was advertised as the toughest 5K in the county.  Which I chalked up to hype.  It was supposed to be part road and part trail and I figured I had run both types before, and knew the town as being flat, so how hard could it be?  I even talked my friend, Bix, into running with me.    We stayed together for about 1/4 mile before she told me to just run, that she was going to take it easy.   The first 1/2 mile was flat and on the street, so no surprises.  Hit the trail and still mostly flat, and then… what the frak?  Where the hell did the freakin’ mountain come from!  I now know that we gained 500 feet in about a 1/2 mile.   And the only reason it was even a 1/2 mile is because it was all switchbacks.   My first thought was- Bix is going to kill me, second thought- breathe!  My first 2 miles were in the 12:00 range, mile 3 (downhill and flat) was in the 9:00’s.   Finish time 33:31.  My only goal for this race this year is to be better prepared and maybe finish a minute or so sooner.    And have fun.    🙂

With the temperature’s steadily rising here, I need to get used to running in the heat again.   How is the weather in your neck of the woods?

How has your week gone so far?  Everyone get their taxes done?

Anyone else been totally surprised by a race’s course?

7 thoughts on “Lies and squats”