I met my goal, but just barely.

Firehouse 5K offers packet pickup at the firehouse the night before and it was a breeze.  My only hesitation came when I saw the sign for an Easter Eggstravaganza being held in the nearby park on the same day.   I asked what time that started because I was concerned that it would affect parking.  It didn’t start until 10 so no worries there!

I had laid everything out the night before but right before leaving the house in the morning, I grabbed a long sleeve layer.  It was foggy and a little bit cold but I was hoping it would warm up.  The plan was to head out with my mom and the puppy.  Since it was so close, my dad and brother were thinking about following later.    Once we arrived it was still foggy and I figured that since my lungs have become babies who don’t like weather below 50, I put on my long sleeve layer.  I also used the inhaler again before heading to the start line.   I have had 3 rough races this year for a variety of reasons and I didn’t want this one to be the same.

I managed to snag the same parking spot as last year so it was about a block and 1/2 to the start line.   As we were walking up, I heard my name being called.  Huh?  Looking to my right, I saw a couple walking up.  It was another SLO Marathon Ambassador!  It was Lisa from Runner In Training!  Both she and her husband were running too.  It was great getting to meet another ambassador 🙂

The start time had been pushed back to 8:45 for some reason but there was a group warm-up put on by a local sports therapy group.   Then the usual pre-race announcements, followed by the national anthem.  I love how they display the flag at this race, and the singer gets to sing the anthem from the top of the big truck!  I’m kind of jealous.  With a blare of the truck horn, we were off!

A little under 1/2 a mile is on streets up to the trail, then it’s about 200 yards until we start climbing.   This is where it gets tricky.  All of the trail section is single track.  2 miles of the race is trail, which means 2 miles is single track.  Which for the last mile is ok because the crowd had thinned out.  However, the initial, biggest climb was a crawl.    At one point, I was stuck behind 6 people walking.  The short length of the switchbacks made it hard to try and pass people.  I managed to get past a few but not all.   We were so on top of each other that I could have smacked the firefighter in front of me on the backside.  ( I didn’t!)

After finally getting to the top, I was able to get around some people.  It also leveled out briefly so I picked up the pace a bit.   Then we hit our first downhill.   We went down a different way than we came up, so the downhill was shorter than the uphill.  The trail is shale-like, with some bigger rocks and divets, so you had to watch where you were putting your feet.   I tend to have kamikaze tendencies when running downhill on trails, and I have fallen before.  I skidded out once but managed to reign it in.  Then there was another uphill.  This one was small but I was already tired from the mountain.  It also bottle necked again.    Then it was down hill back to the street.  Kamikaze me came back and I a hit a 6 minute pace for the entire downhill.   Then it was back to the street and across the bridge to the finish line.     I crossed the line and stopped my watch.  Final time- 32:59.  Really?   Yes, it was faster than last year but only by 32 seconds.

I really felt like I was running faster than that.  The only thing I can think is that I probably walked close to a mile of it, between the climb and the bottleneck.  And even me running downhill like a crazy person couldn’t make that time back up.    It was hard to go off my Garmin because it never matched up with their mile markers.    All I really used it for was current pace.    I have to admit that maybe it’s just that this race kicks my ass. 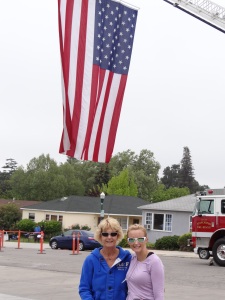 This is a smaller race, only 3 years old, but it has been impressively organized each time I have run it.   The course is well marked and any time there was a trail split, there was always a volunteer directing which way to go.   There was only one water station but that more due to land constraints than poor planning.    There is also a small health fair.     The crowd was smaller than last year but there was a conflicting race in a nearby town that accounted for that.   The other race is a very popular 10k that draws thousands every year.   It really was too bad that they both fell on the same day.

My family was at the finish line which was cool.  We took advantage of some photo opportunities.  And in keeping with last year’s failed selfie, I have a new one to add to the collection.  I tried to get a photo with my brother and he ducked.  So my dad photo bombed again-

Today my legs are feeling the results of my crazy down hill running.  That probably wasn’t the best idea the week before a half marathon, but it was a fun race.  Maybe I will try again next year.  🙂   Running another 5 miles yesterday didn’t help either.  🙂    But the pizza reward for lunch was amazing!