After my post on Friday, I did feel inspired enough to complete a measly ten minutes of exercise.  What could it hurt?  I decided 5 minutes of punches sounded like a good start.   It didn’t occur to my addled brain that that meant that I also had to hold a squat for 5 minutes.  I thought I was going to fall over.  But I held it.  Then I had to take a break before moving on, ha!

Saturday was a work day for me, so I started my day that way.  I’ve mentioned before that I work in a different town than normal on Saturdays and the building is bigger than ours.  I wear a Nike+ Fuelband everyday but it’s mostly out of habit, I’ve become a little disenchanted with it.   I also rarely hit my goal unless I run and even then it’s rare.  However on Saturday, I think it was a little confused.  It registered that I had surpassed my goal by 11:30 AM, and had exceeded 10,000 steps… at 11:30.    Ok, the building is bigger and I worked standing up but come on, that’s a little fast!

After work I headed home to find that my home town was a lovely 96º.  Yippee!  I ran some errands and waited for it to cool.  I waited mostly in vain and was losing some of my new enthusiasm, so I headed out for a run at 4:30.   A long run.  It was 88º.  Because of the heat, I did not care about my pace.  I just wanted the distance and the time on my feet.    I had layered on sunscreen and had a huge bottle of water.   I took it slow and walked when I needed too.  I took a breather at the halfway point as well.  It actually wasn’t bad, if only there were less damn hills.   I normally do one hill 3 times and another 4 but I dropped one of each, so it shortened my route a bit.  All in all 8.63 miles in 1:37.  Yeah, I was slow, I walked a lot, but I felt good.  And yes, I was the only idgit out there. 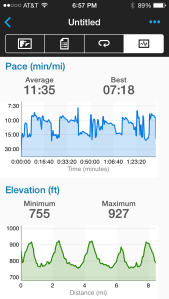 Today hit 105º, woo hoo!   I got out of the heat for a few hours by finally going to the movies.  The Fault in Our Stars was awesome and I managed to avoid crying.   There was definitely water in my eyes, but no tears fell.  For a YA novel, the theater was filled with adults.  🙂    And I may have eaten too much popcorn.  🙂  But it was yummy.   Afterwards, my mother joined me on the crazy train and we went for a walk.   My weather app said 102º but it did not feel that warm.  Normally I run ahead and double back to her but today we mostly just walked.    It was a good walk, just shy of 4.5 miles.

I would say that this was a pretty good week for the challenge that I set myself.  I actually had a lot of opportunities to use an excuse last week.  Between a later day at work, a raging migraine, the heat and just being female, I was so close to chucking it.   But for once I didn’t. Now if I can only keep it going.  It’s gonna be a long summer.   🙂

How was your weather?