I start a new class in a little less than 2 weeks and unfortunately it falls on Wednesday nights.  Boo!  So last week NikeC and I moved gym nights to Thursdays.   We were hoping that it might be a little less busy but instead it looked like everyone was trying to get in one last workout before the weekend.    We weren’t able to warm up on the ARC Trainers so we tried the stationary bikes.  We used the recumbent ones, so I was wondering how much of a workout it would be.   I was sweating within 8 minutes- ok maybe a bit of a workout.  20 minute warm-up- 4 miles-done.  Then it was onto the circuit room, which was busy.  There was even 2 grunters in the circuit room, using the machines in very odd ways.  For the most part, everyone was using the room right, woo hoo!   After a good work out there, we moved onto to the ab room.  I admit I have zero skill there and always do my crunches wrong, so I hung out on the ab roller.   It’s kind of fun and I could totally feel my abs (sore!) the next day.  I also posted my very first throwback Thursday pic- and got the hashtag wrong.  #fail  But anyways, I finally found a pic of my very first race-

I worked this Saturday, so I was able to go in later on Friday.   I was super excited about this because I wanted to get my 10 miler done in the morning, that way I could have a lazy weekend of a rest day and a 6 miler.    I slept until a little after 7 before getting up.   I was feeling off but told myself I was just trying to be lazy.  After getting ready, I knew it was a little more than that, so I ended up crawling back in bed.    Now if you knew me really well, you would know that I have a few idiosyncrasies, or neurotic tendencies as my mother likes to call them.  One of those is to only get in bed after a shower, even if it’s 3 in the morning and I am dead tired, I take a shower first.  Even the few times I have come home sick from work, I take a shower first.  My mother tells me I am going to be single forever.   🙂   I say it’s a holdover from all those Taco Bell years and coming home smelling like a burrito. 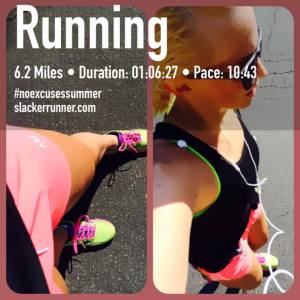 The fact that I crawled into bed full of sunblock; I probably should have skipped the run.   But after a little more sleep, I dragged myself out the door.  I was under fueled and under hydrated, so I brought along some Gatorade and made sure to keep it slow.   For once I had zero trouble following through with a longer warm up.  🙂  It was warmer than I would have liked for 9 in the morning, but it was not a horrible run.   All in all, 10K done and I was still glad I made myself get out the door.

Even though my long run failed, I still treated Saturday as a rest day.   My left leg has been a little more sore than usual, so rest sounded good.  Plus after getting off work and running the usual errands, I decided to go see Guardians of the Galaxy.  Have I mentioned I am serious nerd for the Marvel movies?    seriously that Disneyland Avengers Half would awesome but I would need to sell a kidney for it.  🙂  Anyhow, the movie was really good and I indulged in too much popcorn.  Yummy.  And I still had Sunday for that 10 miler.   Well, that was the plan…

Anyone have any odd idiosyncrasies out there?

Anyone else seen Guardians? Thoughts?

13 Comments on “An Abbreviated Long Run”

I admit, I may have a problem.
It’s been a long time since I felt like a “real” runner.
Set out for a long run yesterday which turned into a walk.
Happy Mother’s Day!!
Sometimes things don’t go according to plan.
I don’t think I’m cool enough for these shoes😍