I had a feeling this post may border on wordy which is why most of the pictures were uploaded in the last post.   Now for what those photos didn’t show.

I was able to get off work a couple hours early on Friday, so I headed straight home to finish packing and preparing.  I felt like I was both taking too much and not enough at the same time.   My mother and I headed out early Saturday morning, we planned on spending some time at the Ventura Mall before heading to packet pick up and the hotel.   I haven’t been in a mall in years and well it was kind of a let down.   The only upside was a Hot Topic for my inner nerd and I may have spent a little too much at Macy’s (damn Dooney!).  From there it was on to the hotel.

When I booked the hotel I looked for one that advertised as being near to the pier.  It didn’t occur to me to compare the addresses until 2 weeks ago.  Oops.  But I lucked out, the hotel was 1.2 miles from the pier on the same street and right next door to an In n Out, and I was able to get chocolate milk from the 7-11 across the street.  Sweet!   Dinner was at BJ’s Restaurant, where I indulged in a pretty good burger and fries.   That was followed by a 3.5 mile walk down to and around the pier to get my legs moving before trying to get some sleep.

Once checking out of the hotel on Sunday, we headed back to Santa Barbara for a little more shopping.   I was looking forward to a real Lululemon and just some window shopping.  The weather in Santa Barbara was amazing.   After that it was north to SLO for dinner and then finally home.  We were tired.

Not much to say here.  Packet pickup was a breeze, both easy and super windy.  Instead of a bunch of useless samples in the bag, they had a table or 2 of samples.   I only took a sample of KT tape.   The website looked like there would be a lot of vendors but most seemed more like local crafts and things.  Kind of like a farmer’s market minus the food.   I stopped by the ProCompression booth but there was no one working it?  There was live music playing and a little listening area as well.  A very nice (cute) police officer took a picture for us, but my mother deleted it- so there’s a selfie instead.  🙂

Race morning dawned and I had no need of an alarm.   I hadn’t slept well the night before and had been awake off and on from about 3 on.   I wasn’t feeling so great but that wasn’t too surprising to me.    I had packed some candy corns for race fuel but they sounded nasty so I did not even take them.  I got ready and headed out the door, I had planned on walking to starting line.    While I was walking there the marathon runners were running up the other side.   They looked so ready to go,  to the point that 3 were bouncing basketballs while running.   Seriously?  It’s all I can do to run a half marathon and you are going to bounce a basketball (or 2!) while running 26.2!!! 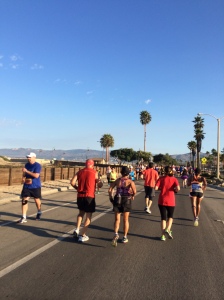 Anywho, I made my way up to the starting line in time to jump into the first wave.  A few announcements and count down and we were off!    I had issues getting both my Garmin and my Nike+ app started but managed to get them going not too far from the starting line.    I was aiming for a 10:00 average so when mile 1 came in at 9:50, I was ok with that.  Mile 2 seemed a little tougher and fell to 10:17.   I was using intervals of 8:30 run and 1:00 walk as I knew going in I wasn’t 100%.  Even with this I was tiring quickly.  The weather felt way warmer than I would have liked.   The course went through a nice housing area before going back to the main street.  It turned off towards the harbor for a quick out and back to add mileage before heading back down the main street into Oxnard and out into some fields before turning around and going back the way we came.  Mile 5- I took 2 walk breaks, I was having trouble getting my breathing under control.   I had already used my inhaler 3 times.  Which was odd because I hadn’t used it on any run since my last half marathon in July.   I kept trucking along until my next walk break at mile 6.5.  Which is where I had to get real.

I only ran once in taper week leading up to the race.  It was 3.5 miles and it was the hardest run I have ever done.   I mentioned briefly that I had finally started my antibiotics.  Between those and my lovely stomach I was thisclose to deferring Ventura.  I was feeling so crappy.   I told myself I was being a big baby and would be fine.  In reality I had no business running a half marathon at this time.   Mile 6.5 was the beginning of this epiphany (and others but more about that later).

I walked it in from there.  I called my mom at mile 7.5 and told her she had more time to relax at the hotel because I wasn’t going to be near 2:10:00.    I just kept walking.  I was so hot, my hamstrings were cramping, and my left shin felt super angry.    I took 2 cups of water at every aid station.  One to drink and one to dump over my head.  I alternated my Gatorade and their water to stay hydrated.   I had Honey Stingers in my belt but the very idea of those made me ill.   I grabbed a Cliff Shot around mile 9 and carried it for a while.  I eventually ripped it open around mile 11.  I had somehow managed to grab one with caffeine and I was hoping it would help the lungs.   I know it didn’t have enough caffeine to do anything but one can hope right.    I jogged a tiny bit each mile both to keep the pace below 14:00 and to loosen up my stiff legs.   The volunteers and the crowd support was pretty awesome.  Around mile 11.5, there was a little boy dressed as the Flash giving high fives. He was cool. 🙂

The last 2.5 miles or so I was keeping pace with a women who was race walking and a guy who would run ahead and then walk.  I always caught him on the walking portions.  I couldn’t tell if he was doing intervals or if he was as spent as I was.  I never saw the 13 mile marker but did see the 26 one.  I figured I could run the last .2.   Ha!  That was the longest .2 of my life.  I thought the finish line was never going to arrive.   I did leave race walker and interval guy behind.   Finally there was the finish line and I was done.  Half marathon #9 complete, not my best, not my slowest but probably the most walking.   I won’t lie, I did get a little teary eyed at the finish.  Thank goodness for sunglasses.

Since I had finished later than planned, I barely had time to limp back to the hotel to shower and check out.  I hurt badly.  I don’t think I have been that sore after a race since my very first half marathon.  I gimped the 1.2 miles back to the hotel, stopping to stretch along the way.   The chocolate milk in the mini fridge was the best thing ever.   After checking out, we hit In n Out for food.  I was suddenly hungry.   Finding out that they still sold extra large drinks was the second best thing ever- that Diet Coke tasted amazing.   I did feel bad for my mom though, she had to be seen in public with me- jean shorts, teal tank and bright purple compression socks.  I was styling, ha!

So no, this race did not go according to plan but it was still a good weekend.  Shopping was fun, the food was yummy.  I also learned that I have serious problems tolerating humidity (74% WTH?!).  I got a few compliments during the race about my use of neon and I got a shout out from a fellow SLO ambassador when she ran by me.   So while I am rethinking some things, I still call this weekend a win.  🙂

How do some of you deal with humidity on a regular basis?  Seriously, anything over 25% is rough for me.  Maybe I am spoiled?