How is it November already?  I should not be writing an October recap yet.  Oh and those  Christmas commercials just need to stop! 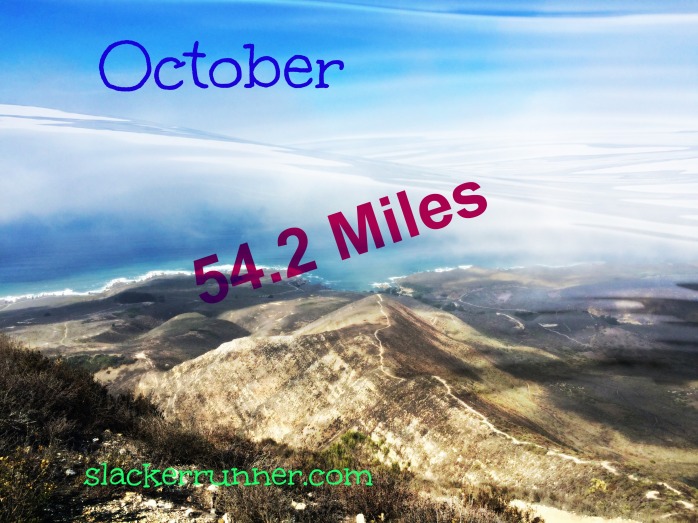 In keeping with my stepping back plan, October turned in fewer miles than before.   Only 54.2 miles.    I also ran zero races.   That 54.2 miles were a mix of road and trails which is kind of cool.    I also realize that my little 2.5-3 mile jaunts the last 2 weeks added to the decreased mileage.   But I refused to give up the daylight until I absolutely had too, so I am ok with that.    Overall, I would say that it was a good month of running.  Yes I had some rough runs, but there were was an amazing one too.   🙂

October was kind of a giant stress mess and I maybe made a few poor food choices.  I admit to stress eating especially since I was actively trying to run less.  Couldn’t run the stress out so I ate yummy food.    I took a day trip to LA for a doctor’s appointment at USC followed a week later by a day trip to Santa Barbara for notary renewal.   I actually ate well both those days but both trips stressed me out.   My stomach is still being a pain in the ass but I’ve adjusted, sort of.  My doctor’s office called to set up a colonoscopy in December and I think I surprised them by how eager I was.   🙂  I just want answers.

Costume for work… It was a comfy Halloween this year :).

Friday was Halloween and I did good candy wise. I only ate a few of little boxes of Nerds.  For work, we did a CSI theme for costumes.   Complete with a duct tape body outline on the floor.  However I have seen some pics on Facebook from co workers at other locations, so I know that there is no way we won the contest.  It started pouring rain a few hours before I left which while great (rain!!!) meant  I was even colder than I was before.   I just wanted to go home and snuggle up in my chair.  But my friend was having a Halloween party so I changed into my second costume of the day and headed out.

You know that part in Bridget Jones where she’s shows up dressed for a Tarts and Vicars party but didn’t get the memo that the dress code had changed?  Ummm, yeah that happened.   I had texted my friend a time or two to check about costumes, I was so not feeling the festive spirit.  So I made an attempt.   I had an old button up shirt of my grandpa’s that I have been hanging on to for years.  It was pink, that plus a pair of boxers and my pink ProCompression socks gave me a lazy girl version of that scene from Risky Business.  The shirt and shorts combo actually covered more than most of my running gear so other than being cold, I felt ok.    That was until I walked in and was one of the very few adults in costume.  Ummmm, boo.    If it hadn’t been so wet and cold I would have just let it be but after about 20 minutes, I went and got my jeans from my car.   I had to work the next day so I did not stay long before heading home.

So long October, time for November.  Time for hitting the treadmill 2x a week.  😦  But I do have a race next weekend!

How was your Halloween? Ever show up somewhere under dressed?

Anyone else annoyed by the early Christmas commercials?