It’s not that I forgot about it, just that it somehow snuck up on me.  I thought I had another few weeks.  But I don’t.  I feel woefully unprepared for this race.  Not just because I still haven’t upped my mileage but my head is just not in the game.  At all.   I considered downgrading to the 5K at packet pick up today.    This coming from the person who completed a 5K after a 10K with serious asthma complications.   But let’s back up.

Monday– I knew I wasn’t going to be running after work but it was odd not taking my gym bag.    I had a meeting after work about a fall race so the evening was still spent talking about running.  🙂   Of course, as I was driving home I was jealous of all the people out running.

Wednesday–  National Running Day!     I was planning on running anyways but by days end I really needed to run.  For the past month, I feel like I have been waiting for the other shoe to drop.  I don’t have to wait anymore, it drop kicked me.   But it happened, so now I can build from here and move on.   I made it through the day and headed to the lake for an easy 5K.    11:44, 10:17, 9:27.  All over the place but pace wasn’t the goal, quiet thoughts were.   I also stopped along the way to visit with lake cat.     🙂

Thursday–   I really had planned on running.  The weather was odd all day and just kept getting grey-er and grey-er.   The wind had increased as well.   I changed into my running clothes and headed north, hoping to drive out of the grey.  An upside to commuting is that I have multiple locations along the way to run.   The sun came out a bit along the way but the wind increased.  By the time I hit home town, the wind was 20+ mph and my head was not mentally wiling to do that.  Rest day instead.

Friday–   National Donut Day!     My boss was nice enough to pick up donuts on her way in and you better believe I partook.  I had 2.  🙂   Both were equally amazing.   I had planned for the 2 all week, and my carb choices were on point all week, so I had zero guilt with either donut.   Plus, don’t donuts have magical healing powers?      And as an added bonus, I got to leave work shortly after 5, so it was only a 10 hour day.  Woo hoo! 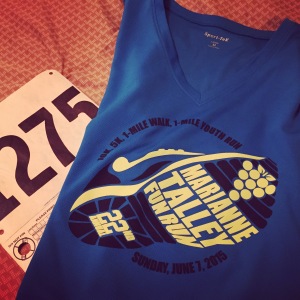 Today- Instead of running, I headed down to SLO to pick up my packet for the race tomorrow.   I had received an email that said this was their largest year yet with well over 500 runners and I knew that race morning could be more than chaotic. Parking!!!    Packets could be picked up early at Left Lane Sports in SLO, so I decided it was worth the drive down.   Plus, I’ll never turn down Firestone for lunch.  🙂    I returned home in time to make my hair appointment.  I loved the cut I got in February but it had grown a little too long, so it needed to be chopped.  I tried to take a before and after picture but I am crap at selfies.  🙂

Which brings me to tomorrow’s race.   Honestly my head has been elsewhere all week.  6 miles seems so very far.    My only goals are to finish and have fun.  I ran this race 2 years ago, so I know it is lots of loops and turns throughout the vineyard.  I am probably going to wear my trail shoes.    It also has a start time of 8:00 and is quite a drive from home, so it will be an early morning.   I am hoping it won’t be too cold.  This has been the oddest May/ June weather.

Advice for when your pride gets punched?

Did you indulge in donut day?  How was your week?