Last post I shared that I was lucky enough to be offered the chance to be an Ambassador for the SLO Marathon again.   Which is freakin’ awesome and I am looking forward to not only the race but all the awesome runners I get to see again.    As with most ambassadorships, it comes with some challenges along the way.   The first one was dropped last week- to share our resolutions/ goals for the 2016 race.  Hmmm, there’s that word again.

I’ve spent some time thinking about it for the last week.  How do I share a goal but stay true to my year of being goal free?    Well, I am still goal free.  That said, I feel like I have unfinished business with the SLO half.   Let’s recap.

In 2014 I was looking forward to running a race that I had been trying to run for years but never made it happen.   It was also my first ambassadorship so I was super stoked on that.    I was excited on race morning but mentally I just wasn’t there.   It wasn’t my fitness level, it wasn’t the hills; it was all in my head.    Mentally, I blew up around mile 8.   I finished the race in 2:10:32 which wasn’t bad but I felt like my legs had more in them, I just couldn’t stop the mind games.   Not sure if you can tell by my smirk/smile but I was very irritated with myself post race. 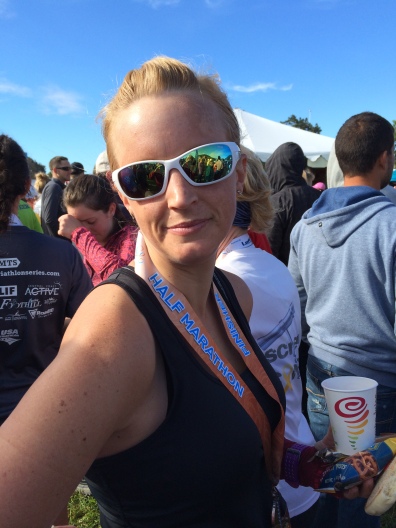 I swear I was trying to smile not smirk

2015 rolled around and I was able to train with a custom McMillan training plan.  The race fell in the middle of all my stomach issues so I knew breaking 2:00 was unlikely but I felt strong and ready to go.   Even though I had felt sick prior to race start, I felt great for the first 5 miles.   I was beginning to entertain thoughts of a new PR.    Then I went down, hard.   As clumsy as I am on a daily basis, I had never fallen while running before.  There’s a first time for everything right? Thanks to some helpful runners I was back on my feet quickly and running on.   Maybe it was a delayed reaction from the fall or just my stupid stomach but mile 7 started with my stomach cramping in a very bad way.   I pretty much walked the entire mile taking deep, slow breathes.  Mile 8 saw another first for me- a port a potty stop.  Despite all that, I was still mentally on point.  I had reassessed that a PR wasn’t going to happen but even with all that drama I knew I could still beat the previous year’s time.    But my stomach fought back and miles 11-13 were all survival mode.  I was also cursing that there are no porta-potties at mile 12.  Cuz who needs one with only 1 mile left?!  I crossed the finish line in 2:15:06 and I was damn proud of that.   It may not have been the time I was hoping for but for everything that day threw at me, I stayed strong and positive the entire race.

Half smile/ half grimace

So while I have no plans of setting a goal for SLO 2016, I do see it as a redemption race.   Both years I felt like I had more to give and I would like to see that happen this year.   I love the course- hills and all- and I can’t wait to see what I can do this year.   🙂

What about you?  Do you have a race that haunts you?

Ever fallen while running?