Disclaimer: I received an entry into Rock n Roll San Diego as part of being a BibRave Pro. Learn more about becoming a BibRave Pro (ambassador), and check out BibRave.com to review find and write race reviews!

Last year I loved this race and I jumped at the chance to go back.   The course is great, the crowd support was awesome- sign me up!  However, I also knew that I was would be one month out of Big Sur, so realistically I had no idea how that would affect me.  So I was going in with the only goals of having fun, enjoying the race and crossing that finish line.

I joked in my previous post that with 8 aid stations this would be the race to try running without carrying water however I knew I was too paranoid to actually do that.  Except I forgot my flasks.  I didn’t figure it out until after the expo so it was too late to buy anything.  I thought about carry a plastic bottle but that just didn’t sound appealing to me.   Guess I was relying on aid stations after all. 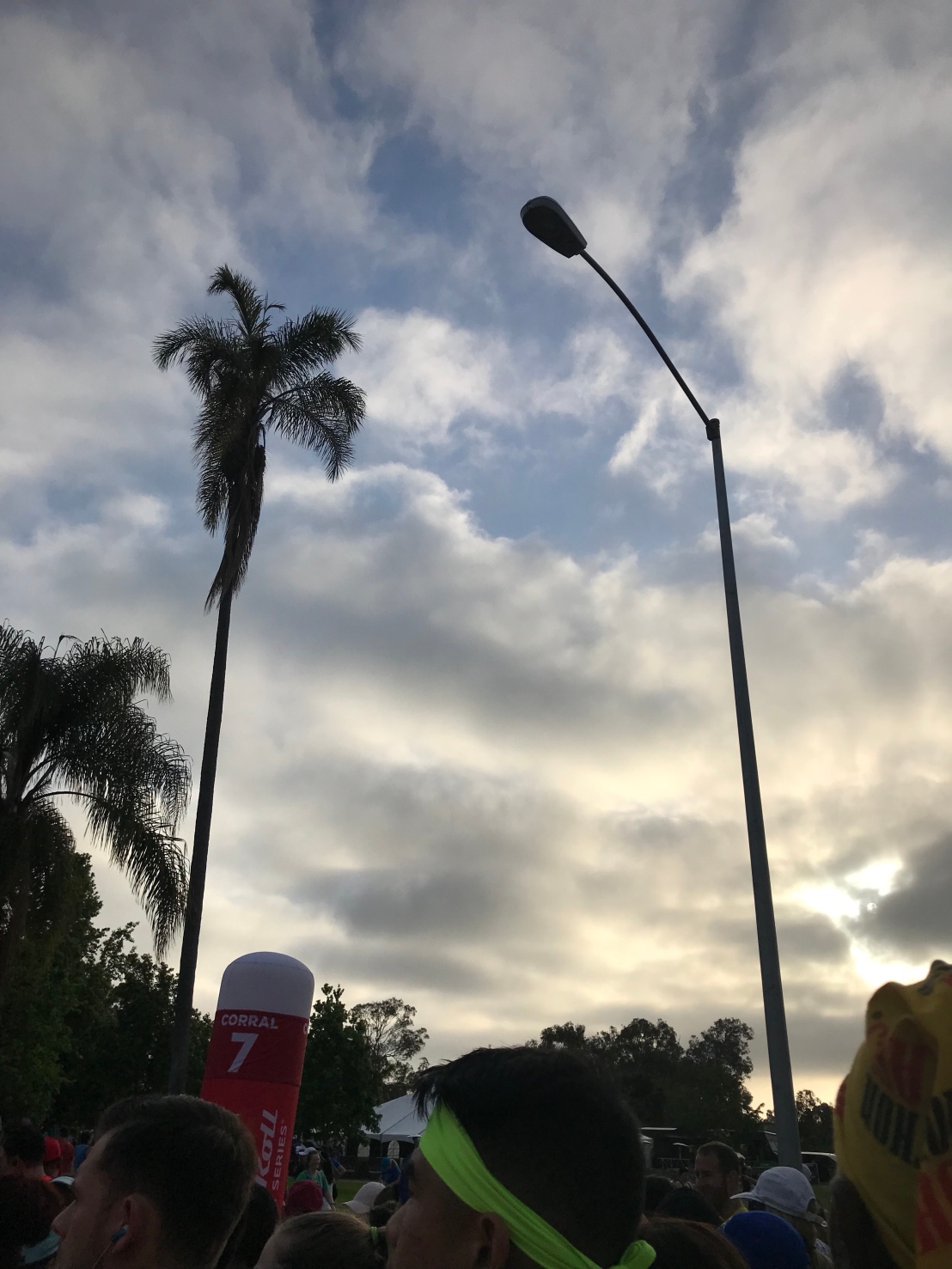 Race morning dawned all too early after a poor night of sleep.  I was ready fairly quickly which was surprising as I was having major indecision about what to wear on my bottom half, I settled on my Skirt Sports skirt, made a quick compression sock change and was out the door to meet Kate.  I love my hotel because the race morning shuttles pick up 1/2 block down and the finish line is 3 blocks away.  Met up with Kate, we boarded a bus and in less than 10 minutes we were at the starting area.  We wandered for a bit before getting in a porta potty line.  We missed the National Anthem- too noisy- and separated to our corrals after that.   I appreciated the new larger corral markers- it made it easier to find mine (17 of 33) but we were still packed in like sardines.  I also started to question what the hell I had put down as a finishing time.  The 2:15 pace group was in the corral behind me.  Say what?!  But we steadily made our way up and then we were off!

I love that there is a man shouting encouragement though a bull horn as we run past .25 mile in.    It can pretty crowded in the first few miles but my goal was to just keep my effort steady.  I had told my mother that I wasn’t really concerned about my finishing time but in the back of my head, I figured 2:25 ish wouldn’t be too off the mark.   However during mile 3 things started to get rough and I realized there was one thing I forgot to take into account- humidity.

I was still running just a lot slower.  It was so damn humid.  It was mile 4 and the people running near me looking like their shirts could be wrung out.  The men running shirtless looked like they just got out of the shower.   I happened to pull out my phone to text my mother that is humid- actually I used much more colorful language- and she reminded me to use my inhaler as humidity is one of my asthma triggers.  But when I pulled my phone I saw that it showed 80% humidity.  What the what? I am used to like 15%.  The sun was pounding down on us and I could tell we were all struggling.  I texted Kate and told her to be careful.   I did all this while running, haha.  I was still enjoying the race, I love running through North Park and Normal Heights.   Mile 5 also brings us the Wear Blue- Run to Remember section and I like to try and pay more attention in that area.

My strategy was to run everything but walk the entire aid station- getting water and Gatorade at each one as it was offered.  Clearly this was not the race to not carry my own water.

Oh my gawd, I was hot.  Temp wise, it wasn’t even hot but the humidity was kicking my butt.  I was now taking more time at the aid stations.  One cup of Gatorade and one cup water.  If the station only offered water, I would get one cup of water at the very beginning, drink it while walking the station slowly, then get another to drink at the end.  I took off my hat and dumped water in it before putting it back on. The stations were also struggling to keep up with demand from the runners- in fact I would be surprised if the one at mile 9 lasted the entire race.

I took my first non- aid station walk break around mile 9.5.  I just had to.  I was starting to feel nauseous.   Kind of like I had consumed too much water.  Which I coudn’t see how as I wasn’t carrying any and they don’t fill those cups up too full.  But I skipped an aid station just before mile 10.

From then on it was a run- walk to the end.  Which is a bummer because I really like the last 3 miles.  We come back into Balboa Park, run under the big guitar guy, up a hill past some Taiko drummers, by a golf course, then there’s a sweet downhill that brings you back into the city.     I may have been feeling rough but I was still trying to enjoy as much of my surroundings as I could.   Then it was through downtown with a slight down hill to the finish-

I honestly hadn’t been looking at my watch at all so I had no idea where I was at time wise until after crossing the finish line.  That time is fine by me.  So fine, I’ve already gone and input my results into Athlinks.  😊 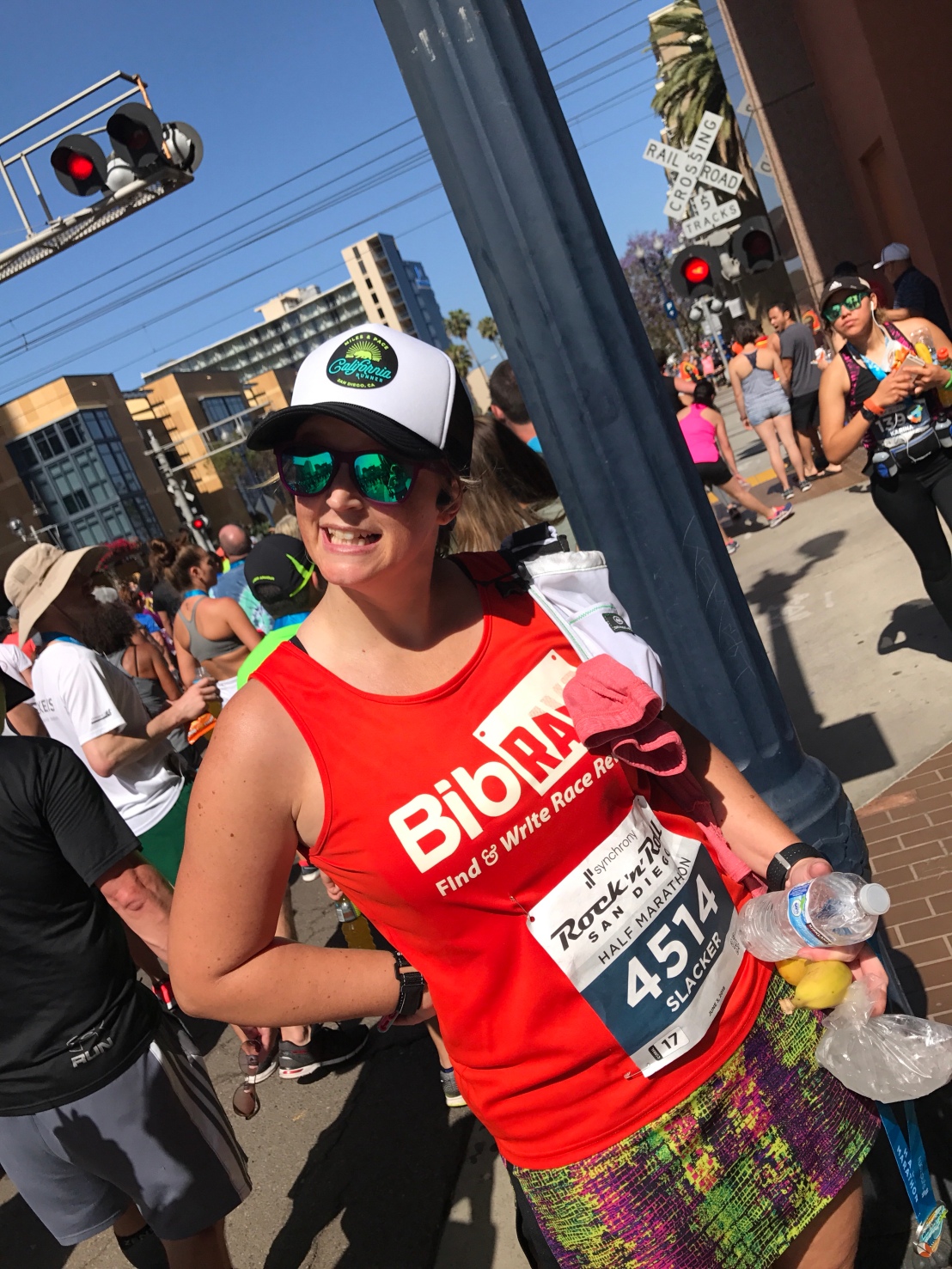 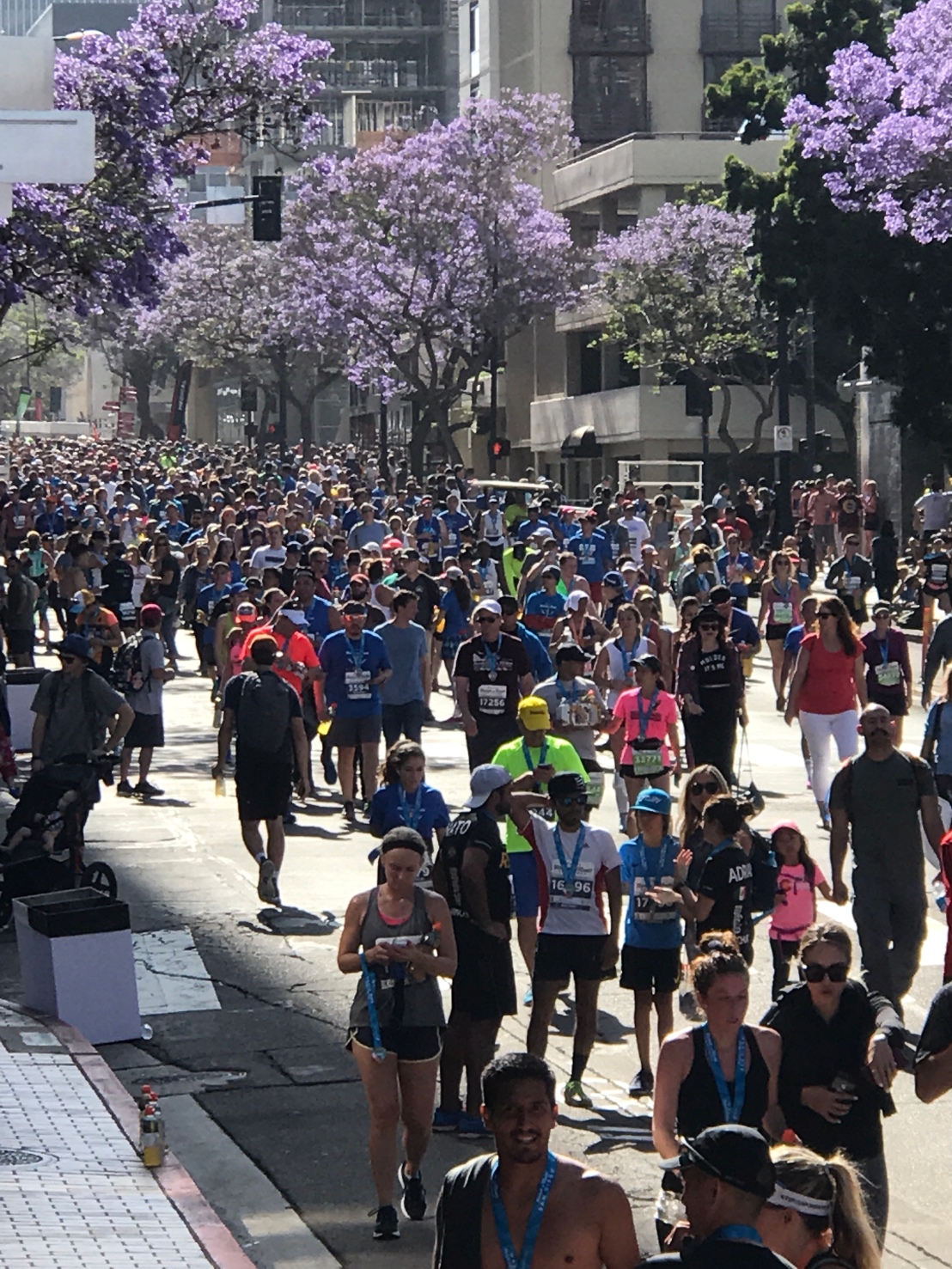 I stood around for a couple moments needing a moment if that makes sense before getting my medal and heading out of the chute.  One of the volunteers became my new favorite person as she was handing out bags of ice.   I stuck it on my head as I walked to the meeting point to find my mom.   I still felt way too hot so I jammed back to the hotel for a cold shower before flying back to the finish line to see Kate.    Success.

The weather may not have been my friend but I still love this race and it was only made better with friends out there too. And Kate got a PR!!!!!