Truth– I didn’t run for 7 days.  It made me twitchy in the beginning, feeling like I should get out and run, but the last few days the laziness felt easier.

Truth– I’m in a funk.  Work funk, life funk, running funk.  Can’t quite decide the best way out of the funk.  I’ve considered going back to school–well, I’d have to finish it first.

Truth– Food and I have a very dysfunctional relationship.   And it’s not working out anymore.    It’s not like I can break up with it.  For once, I’m not referring to my stomach issues.  I’ve debated writing a longer post on this but haven’t figured out how.

Truth– Green tea is growing on me.  Some brands taste like lemon pledge but some are pretty good.

Truth-I am trying to learn to like the treadmill.   It’s a necessary training tool and if I want to run better I need to train better.  Which means actually getting to the gym to run.   So tonight, I laced up and ran a very slow 5k.  But nothing ached for once- new for a treadmill run- so I’m calling it a win.

Truth-I love the cheesy holiday movies that are on every channel these days.  My DVR is getting quite the work out these days.   But-please, don’t hate me now- I am not a fan of Elf.

Truth– Tuesday was our company holiday party and I indulged with a Diet Coke- they all got wine and I had a Diet Coke.   😋

Truth– I just got distracted while typing this with one those previously mentioned Christmas movies.

Truth– I purchased a new toy- a Jawbone Up.  Standing is not moving.  I have a stand up desk but sadly I’ve been averaging 3500 steps a day- ouch!!

Truth– Everything said above is trivial in the grand scheme of things.

Truth– My commute took an hour and a half this morning, twice as long.  But as I drove past the horrific wreck that was reason for the delay, I thought that we all just need to slow down.  We all need to complain a little less and be grateful for what we have.   Not only during the holidays- all of the days.

Alright, time to be honest.   It’s been a long time coming, I’ve hinted at it but let’s be real here.   The training I did for 17 weeks for City to the Sea was a mess.   I phoned it in.  I knew I was phoning it in but I kept on running in denial.  But actually, let’s look at all the half’s (halves?) I’ve run this year.

Surf City was the very beginning of my training cycle so it really was just a very well supported, expensive long run.   Also the 25K trail race seven days prior made for some sore legs.  The race was a bucket list race, you could say just running it was checking it off the list.   That said, the 2:19 isn’t bad.

Wine Country was in the middle of SLO training.   I was using a McMillan training plan for SLO and Wine Country was built-in as a tune up race.   I went into it with zero expectations but had my best race of the year.    Which I hadn’t expected as I was having some issues with my legs, achy knees and super tight calves.

I was best trained for SLO but even that was mediocre.    I would say I followed 75% of my training plan, my very nice, designed just for me McMillan plan.  What a waste.   I still believe I could have PR’d that race had I not eaten asphalt at mile 5.  Throw in the gnarliest stomach issues I’ve ever had running for the last 5 miles and I am still damn proud of that race. 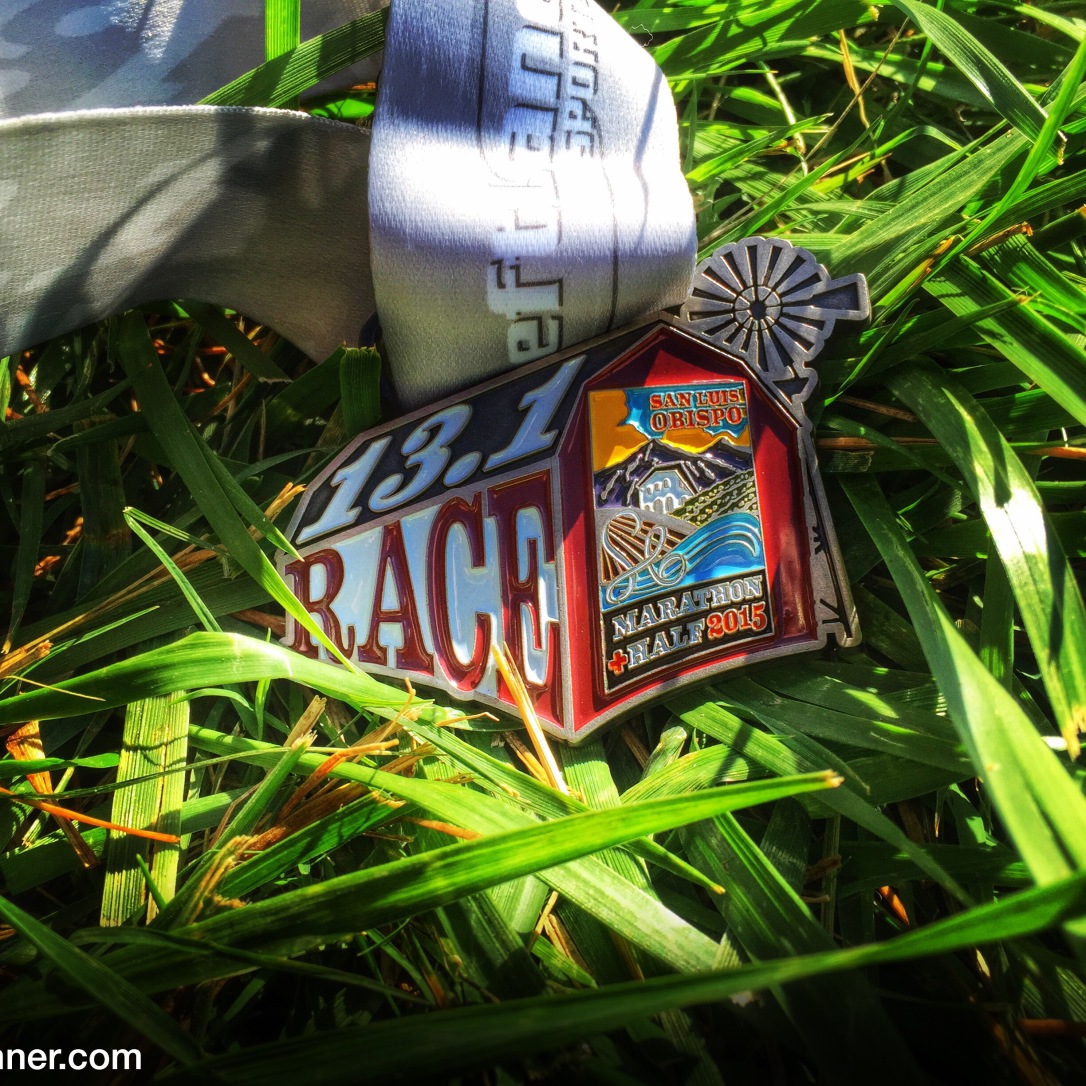 Shoreline was a last minute decision to add a race in the middle of July.  It fell on my birthday so why not?   Under trained and 75% humidity- why not?  Shockingly, I met the goal I set for the race- sub 2:15:00.

Let’s talk about that training plan.  17 weeks, right?   Running 3x a week with one easy, one speed and one long run.  In theory it was just what I needed.   3 days was what I could handle having to deal with some serious stress at work and my stupid stomach.   On a side note, it has occurred to me that all the stress at work is exacerbating my stomach issues but that’s not the point.    So what was wrong with my training?

Choosing quality over quantity means those runs actually have to be quality runs.  They weren’t.  They were time fillers.   Speed work was rare.  You can’t race faster if you don’t run faster.  Want to know how many double-digit runs I completed in those 17 weeks?  One.  One lonely 10 miler on a random Friday afternoon.   9 milers?  Maybe 2.   So how was I expecting to meet my goal when I wasn’t putting in the work for it?   Yeah, I have no answer for that.   I was more than a slacker, #slackerindenial.

So it’s time to buckle down.    Once I figure out what that means.   And what it will look like for a Slacker.  I know I will never be one to throw down 50 mile weeks and it’s not about the miles, it’s what I put into them.    I’m pulling out my dusty running books and looking at that McMillan plan again.   I don’t have any races planned for the beginning of 2016 but I’d like to have a solid start to an actual decent base with good running workouts by the end of the year.   Can I do it?

I have one half marathon left this year.   23 days away to be exact.   I thought about trying to make it another goal race attempt but I think that might make me pissed off at running.   Right now I am mad at myself and it should stay that way.   Plus, this a travel race and I really just want to enjoy the scenery.  It’s Monterey and Big Sur!!  And I may be fangirling Kara Goucher the day before.  Or trying to.  I may be distracted.   😃

The sad thing is that as I write this, I have only attempted 1 mile since Sunday’s race.   Unfortunately, I got sick this week. I actually left work early yesterday I felt so crappy.   I’ve gone to work with a concussion, so going home sick is kind of big for me.   My goal is get in a couple of solid runs this weekend.

So tell me, can a slacker get real?  #slackergetsreal

Any books you can suggest?