As Monday was a holiday, I was able to get in a good 5 mile run outdoors instead of having to head into the gym.   Prior to that I went to lunch with my mom and then helped her prune a bunch of oleanders.  We do this every year and we always use a ladder in ways we shouldn’t while holding shears.   This year was no different.  I always crack jokes that it’s a great arm workout.   Apparently a little too great, between that and puppy pulling on Sunday and Monday, my arms are so sore!  Hmm, maybe I should check out the other equipment available at the gym, not just the treadmill.

My training plan called for 5 miles on Monday.  I headed out early afternoon so I could get the miles in and then go get the puppy for walk attempt #2.    The first part of my route takes me past a cemetery and I run if no ones there but if people are visiting close to the side, I walk.  For some reason my mind thinks that more respectful.  🙂  This day someone was blowing the roads in the cemetery and next to it with a motorized golf cart looking blower thing.    I ran into a dust storm!  I came to a hacking, coughing halt from all the dust I aspirated in.   My boss happened to call right then and I answered since I wasn’t running anyway, she thought I was dying sick again.  I had to convince her it was just the dust!  I ended up walking the first 1/2 mile, so I started off slow. 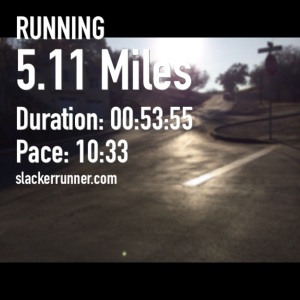 Even once I got going, I could tell I was tired.  Both my legs and my breathing felt labored.   The plan was 5 miles with 4 easy and the 5th faster.   My 4th was faster than mile 5, oops.   My legs felt heavy, and my stomach was telling me that lunch had been a little too big.   By the end of the run,  I could feel that I had a cranky toe as well.   Sure enough, it was a little bloody.  Ahhh, the joys of running.  🙂

I then picked up the pup and drug her down the driveway.  Actually she trotted right down and halfway down the block before she realized what was going on.  Then she just plopped flat on the sidewalk.   With some coaxing and strong arming, we managed to walk a mile in 22 minutes.  Yikes!!!  I think people find us amusing.  There was a man standing on his deck at one point laughing as we passed.  Or as I drug her past.   We then walked past a bigger version of her and she wasn’t sure how to process that; it was so funny.  At the mile point, we turned around and took a slightly shorter route home.  Same as the day before, the second we were headed back, she was the model of a perfect puppy behavior.  We made the .84 mile back in 11 minutes.  And yes, I timed it this time.  🙂

My reward for the almost 7 miles?  A super yummy homemade smoothie-

Today called for a 3.75 mile interval workout.   I knew it would after work and on the treadmill but I was ok with that because I still needed to actually run in my new Wave Riders!  I also had a new armband to test out.  I hate armbands as they usually make me bleed but I need one for the gym.    Plus since switching to the iPhone 5s, all my old ones had the earphone jack in the wrong spot.   I picked up a new one when I was at Sports Authority a few weeks ago. 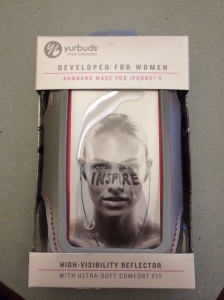 The shoes felt pretty good actually, I need to get in a few more miles to really try them out.  Some street miles too.  The armband held up well too.  No bleeding so far, woo hoo!!!  It could have fit a little snugger, though.

Tomorrow is hump day and a rest day!!!!

How is everyone’s week going so far?

9 thoughts on “A Wave Rider Interval”