I hope everyone had a good 4th of July!

Wild Run 5K brought a couple of firsts for me. One was a rare opportunity due to the race size and something I never thought would happen. What I am most proud of was that I ran a smart race from start to finish-negative splits and all.

Choosing the Wild Run 5k, I knew it was going to be a smaller race and I was a little leery considering the past experiences that I had with races put on by this gym. However, I was pleasantly surprised-for the most part. Packet pick up was a breeze on Thursday. Parking was in the zoo parking lot so super simple. Previous races by this gym had a spray painted starting line, a megaphone start, and an orange cone finish line. So I was impressed to see tents set up, an emcee leading a warm up and a designated start. Granted it was pop-up tent but still a huge improvement. There were about 100 runners for the 10k and 5K combined. A little smaller than even I was previously thinking. The only glitch I saw prior to the race was the start time. I had confirmed that the start time for the 5K was 8:10 but the schedule on the board said 8:30. Umm? Turns out 8:10 was correct. 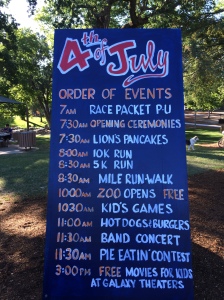 It was go time and we were off. After looking at the map the previous night, I saw that the first ½ mile of the race had a hill and the last ¾ of a mile were on the lake path that I run. Everything in between was a mystery but for the most part was pretty flat.   I started off in the middle of the pack like I always do. We ran through the parking lot to the lot of the baseball field nearby and then up the street. We were still running in a pack when we hit the hill.   It wasn’t the elevation, less 100 ft., but it was short and vertical.   I walked near the top. .3 miles in and I was walking, waah. It was short, about 20 seconds and then I was running again.   I pulled away from the pack and there were only a couple people in front of me. I figured that wouldn’t last long so I may as well enjoy it. After that small hill, it was flat, yay! My watch buzzed at mile 1 -9:37. Ouch, I knew I wasn’t in top shape speed wise, but I was hoping for better than that. I knew I could pick it up so I that is what I tried to do. I kept a guy pushing stroller in my sights. He seemed super comfortable at that pace so I knew I probably couldn’t catch him so I tried to always be able to see him.

I heard someone coming up behind me and that gave me the incentive to run faster. They fell back and I kept going. Rounding a corner I found the only water station but I didn’t need it. I managed to pass a guy in blue shirt here. I just kept watching stroller guy. We went right and there were some rolling hills. The elevation was almost negligible it was just that there was like 6 of them in a row. Stroller guy got farther away. No! So I picked it up again. Mile 2-9:00.   A little more street and we were back to the lake path. I knew the path well so I was hoping to pick it up but I wasn’t going to look at my watch again. This was also where I started to realize that no one had passed me yet, I also hadn’t seen another woman since the start of the race. As I was coming up on one of the bridges on the trail, a biker rode past me and then the 10K leader thundered past.   I got hung up right before the bridge, 2 women and 4 dogs were in the path. I had to walk the little bridge until I got around them.   Then I had like .3 of a mile to go. My goal was to finish strong and not let anyone pass me.   Usually I am dragging and breathing hard by the end of a 5K but I felt like I had the energy for a final kick, so I kicked. Mile 3- 8:30.

Hot damn, that’s a new PR! Not by much, but it still counts.   Here’s where it got really interesting. I was the first female 5K finisher. What?!   Seriously?   How is that possible? Another woman finished about a minute behind me. She looked hardcore, how did I pull this off? I was super excited and a little bit in shock. I realize that it’s because it was such a small race but it’s still a huge pick me up after I had a few rough races.

While waiting for the awards ceremony, we got to cheer on the other runners coming in.   There were people finishing for the 10K, 5K and 1 mile.   The kids running were so adorable.   But hands down the coolest finisher was an 85 year old woman with a walker. She completed the 1 mile course. Talk about awesome. 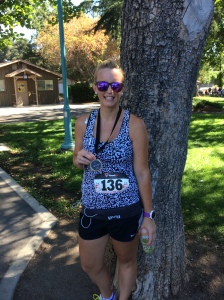 Even with it’s little issues, it was a good race and a fun morning.  Well outside of one thing.  For whatever reasons, my iPhone had a little glitch. I ran the entire 5K with one song playing repeatedly.  27 minutes of Wrecking Ball over and over and over.  I deserve props for not chucking my phone.  I came pretty close.  🙂

Did you have good 4th?

← And the winner is…
Rising Moon and a Windy Run →