I was kind of disappointed with my showing at the race on Saturday.  I was so irritated that I contemplated taking a week off from running.   I always treat the day after a half as a rest day, so I used that as a testing ground.  I spent the day shopping and even with my lower back being sore from the race, I felt kind of lazy having a rest day on a Sunday.  This was the first time I’ve run a half marathon on a Saturday.   I kind of splurged and treated myself to a new laptop on Sunday- my old one is a 6 year old beast that has had issues from day one.  And it weighs like 25 pounds.   I had Monday off from work and thought about running but trying to get things moved over gave me a great excuse to not run.  And even now, I am still having troubles moving iTunes.  Ugh. 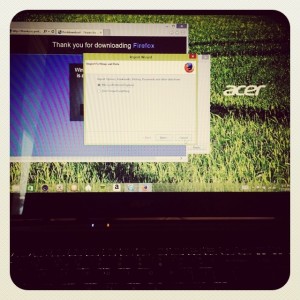 I packed my gear for Tuesday after work but I was still feeling very anti-run.  The horror!  But I was a good little runner and changed after work before heading to meet my mom at the path we have been running.  I think I will call it the river path from now on just for ease of typing.     We started like usual with a walk and I was still fussy.  I still had my slow pace alert on my Garmin from the race and it kept buzzing.  I tried to turn it off but all I succeeded in doing was pushing the lap button multiple times so my splits look a little funny.  I gave up worrying about it because I figured I was going to be a little sluggish.   I walked with my mom until the concrete ends and then run ahead.   My first mile came in under 13.  Hmmm, that’s odd.  Usually walking the first .6-.75 of it makes it pretty slow.   I decided to let my feet do whatever they wanted to do and not over think it and just kept running.   I hit the turn around and once again, there was a headwind going down, where does that come from?!  If it hadn’t been for a horrible stomach cramp at mile 2.6ish that stopped me dead in my tracks for a moment, this probably would have been a nice little progression run.  🙂  Instead I will call it a nice little, unexpected tempo.   12:42-9:41-9:55-8:50-4:12 (1/2 mile)- then another 1/2 mile cool down walk.

Wednesday I tried out my new Barre dvd.  The instructors are a little interesting.  At first, I was thinking that there is no way this will count as a work out.  10 minutes later, my legs were shaking.   It felt like I was getting a good workout during but I recovered really quickly after, so I am not sure how well it worked.  I will have to try it a few more times before I really decide.

Tonight my running plans fell through.   I had planned on catching up with an old friend from out of town, but we weren’t able to make it work.   😦  I was torn about where to run.  Work town looked amazing outside and it had been awhile, so I decided to run there.     The route that I run there is around 4 miles, part of it in a state park on a narrow road with no shoulder.  I had been told there was a little dirt path near the road but I was never able to see it.  I decided to look for it on the way back this time.  I made it through the sketchy part on the way down and stopped for some pics.

Once by the water I was able to find the path and I was followed it back out of the park.   I had to walk part of it because I almost fell on my ass twice.  There was a section of super loose dirt, covered in fallen Eucalyptus leaves- it was like a giant slip and slide.   🙂   The route is downhill for the first 2 miles and uphill back.  I always go out too fast and slow down on the way back.  But once again, I decided to let my feet do whatever they wanted to do.  It was a great run actually, other than it was hot!!!  Work town is not supposed to be in the high 70’s at 6:00PM!

Both runs this week went better than I had anticipated.  I needed that to get over my crankiness.  My left shin is a little sore, so I will probably only run once more this week and take it easy before getting back into training for the Ventura half.  That’s ok it gives me more time to figure out this computer thing.  And hopefully not want to punch it thanks to iTunes.  I’m only missing around 3000 songs, no big deal right? Ugh.

In other news, the fair is here!  I live fairly close so I last night I was able to hear the Zac Brown Band cover Metallica.  Ummm, what?  Tonight, it’s Kid Rock.   I am looking forward to spending Saturday bumming around the fair and eating some yummy fair food.  It only comes once a year right? Plus I walk there, so there’s a little calorie burn.  🙂

Anyone taken time off after a disappointing race?

11 thoughts on “Letting My Feet Do the Talking”