Success… of a Sort

My last half kind of kicked my ass both mentally and physically.   13 miles of sand aggravated some shin splints I thought were mostly behind me.  My confidence took a beating as well.  This led to my change in thinking during July and for the most part it helped.   My most recent attempts at long runs have kicked me around a bit, too.  Today, I finally completed the 10miler I attempted twice last weekend.  However, it was Ugly.    However before we get there, let’s look back.

Thursday turned into a rest day instead of gym night, I was feeling a little under the weather.   Earlier in the week, I had made a smart ass comment about something happening on Friday.  I said that if all the stars aligned in the right way, I would buy everyone lunch.  Granted, at the time, I thought there was no way.  That being said, I followed through when I was proved wrong. 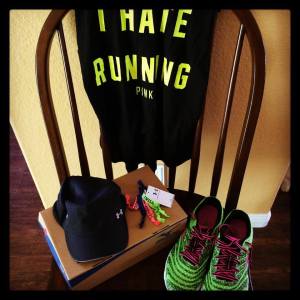 Saturday was a day spent shopping.  I may have spent a little more than planned, but it was fun.  🙂  And when did my impulse purchases become running shoes?

After getting home, I took my family to a local steak house for dinner, where I might have eaten too much.  I followed dinner with a late evening stroll with my mom and the puppy.  Had to test out the new shoes, right?

My stomach did not thank me for yesterday’s indulgence, so this morning got off to a rough start.   I did manage to get out the door for my long run by 9 though.   My mother wanted to meet at the track and do some laps.  After  I was going to help her change out a tennis net.  I ran 8 on the track a few weeks ago and did not want to again.  I mapped out a route that was 7 miles across town to the school and planned to finish the last 3 miles on the track.     The downside was that I had to run across the main bridge in town.  I hate running across the bridge, I feel like I am on display, it’s so noisy and just seems so long.  In comparison to big cities I am sure that our bridge is tiny, but I think it may be the biggest in the county.  Not sure if that’s more indicative of the bridge or the county though, hmmm.

Right from the get-go, I knew it was going to be rough.   I had a shortcut option to cut 2 miles off before the school if I felt ill but I did not want to take it.  After my warm up mile, I decided to test out the run/walk feature on my Garmin.  Once I figured out how to do that I set it for 8:30 run and 1:00 walk.  I was foolishly hoping that it would help the run seem a little easier.  It did keep miles 2, 3, 5, 6 around 10:30 pace which was pretty cool for a long run.  Mile 4 was my fastest at 9:29- the bridge mile- I just wanted it done.   I hit 4 traffic lights in the last half of 4 and beginning of 5; I paused my Garmin at each one but let the Nike App run.  I was curious to see how long they took.  All in all they added 5 minutes to my time. 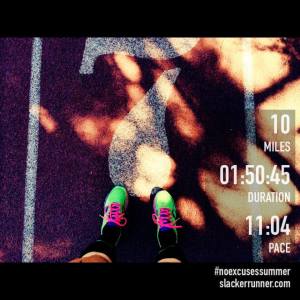 I completely ran out of gas by the end of mile 6.   Since I was on a path and not the street, I had put in both headphones for a pick me up.  Bad idea- a cyclist came up on my left and I never heard him.  I felt his presence more so I took out a headphone as I turned my head, oops.  I was hugging the far right of the path, so he had plenty of space.  We chatted a bit, I apologized for the headphone gaffe (I swear I only ever use one!) but that I was in such misery I was hoping it would distract me.  He agreed that it was a rough morning and already too warm.    My pace slid off from there.  Miles 7-10 all clocked in the 11’s.  Even on the track.   I have never run that slow on the track but I was just spent.   I even thought about calling it at 8 and heading back out later to another 2 but I really wanted the run done all in one.   I was so glad when I was done.  I stretched some and then headed off to help my mother.  Or try, turns out the replacement net was worse off than the old one, the replacement had been donated.    😦

We followed that up with some yummy Chipotle for lunch, have I mentioned we have a Chipotle now?!   I also learned that you should never go to the grocery store after a long run.  I wanted to buy everything!!!  Luckily I wanted to buy all the fruits and vegetables but still there’s only so much food a person can eat.   I didn’t look at my splits for a few hours because the run just felt so rough to me.  Turns out my overall pace was pretty much near where I had wanted to be for a long run, the run just felt the total opposite of easy.   It makes me a little nervous for the 12 miler I need to do next weekend.

Every make a statement you didn’t think you’d have to follow through on?

Ever go to the grocery store after a long run?

← Running with Turbo
Running in Circles →