After 3 years of running this race, I can say with absolute certainty that moving my long run to Thursday was the best decision ever.   Not just because it turned out to be a great run but because per usual, I feel a little broken after this race.   Yesterday’s easy, hoped for 6 turned into a slow, limping crawl for 4 miles.  But I still love this race!  🙂

The race touts itself as the toughest 5K in the county.   Not sure if that’s true but it’s the toughest 5K I have run.   So of course that means I have had to run it 3 years in a row.  The course starts at the firehouse then runs .5 mile on the street before hitting the trails and heading up for 2 miles before heading back to the street and returning to the firehouse. 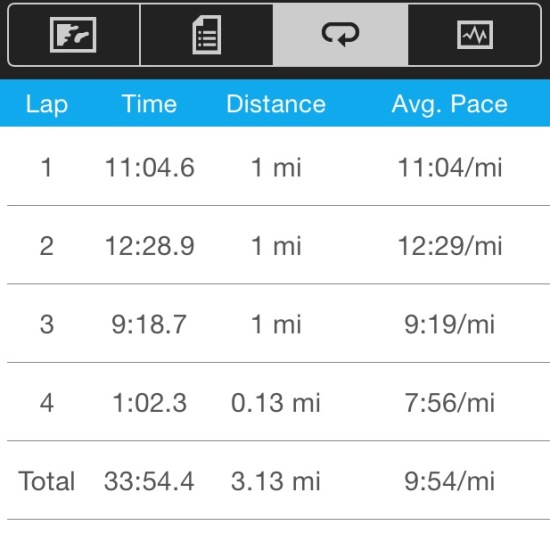 My mom and I were planning on spending the day in SLO afterwards so we headed out in the morning.  I had picked up my packet the day before and parking was a breeze.  We’ve parked in the same spot the last 3 years.   🙂   She stayed in the car where it was warm and I headed to the start line.  The morning was kind of chilly so I wore a long sleeved layer over my tank.   I would later regret that.  A lot.  I ran into an old coworker so we chatted for a bit.  The starting line is under a large flag hanging from the ladder truck and the mayor blows the truck horn to start the race.    I was super relaxed going into this race and that may have given me some problems. 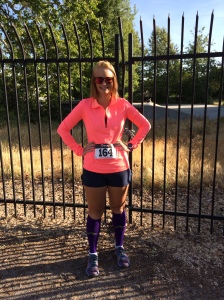 I started way too far back in the pack and had trouble getting out of a cluster in the beginning.  The mountain starts with a series of switchbacks on the trail that usually slows to a single file walk.  I was prepared for this but not for how crowded it was farther back.  I passed people when I could but was hung up a few times.    Once out of the switchbacks we had more single file climbing to do.    The top is kind of a false summit so after reaching the top, there was still a little more up.   I finally got past a few people and was looking forward to cranking it on the way down.  I love running down a mountain.  🙂

But I got hung up again!   I had to bob and weave to get around people and it just took longer.   😦   I ran past a teenage boy who I thought was going to fall off the side of the trail, he was wobbling so much.  I started to wonder if I was gonna have to help him.   Once past him, I ran on down to the bottom and back up another hill.   Once again, I was stuck.   I was behind another teenage boy who had no concept of pacing himself.   He would haul ass for 30 feet and then just stop.   Every time I got past him, he would sprint to pass me and then just stop.   Finally I just sprinted past him and kept going.   We had one last trail downhill and I was able to pass a few more people.    I was sucking air, seriously thirsty and so hot.     I pushed for the last .5 mile and crossed back under the big flag.  First 5K of the year done!

Apparently  I should have pushed a little harder, I finished in 33:56.  My slowest time on this course.  Waah.  I said I was relaxed but that still stung a bit.  Oh well, I still love this course and careening downhill so it was an awesome morning!   Starting so far back and getting hung up a few times probably contributed to the extra time but in reality it was only a minute off my best outing on that course.

The race is always well staffed and has volunteers at every point making sure no one makes a wrong turn.  Other than some interesting trail etiquette I observed, I only had one issue with the race this year.   Water.  Or lack thereof.  In the past 2 years, there was a water station at the junction where the road meets the trail.  You would pass it on the way in and on the way back out.  It wasn’t there this year and it hadn’t been mentioned anywhere.  I ran without water since I thought it would be there.    Boo.

All in all, I still love this race.   Even though, it still hurts to move today.  My calves are pissed.   There was no way I was able to do my long run yesterday.   Knowing that I had already done it was kind of awesome.   🙂

Ever run a trail race?  Or a race without aid stations?

How do you get past people who just don’t want to move?

Nothing like a little time in the dirt.
New shoe Saturday?
New shoes are always a good thing right???
Can we????
Felt a little under the weather this week but still spent some time in the dirt today.
Morning didn’t go like I hoped but I managed to get 3 miles in. Walking was all my stomach would let me do but better than nothing at all!
Join 2,608 other followers