Woo hoo, it’s Wednesday!   WordPress tells me this is the third time I’ve posted with my mid-week musings, so here we go.

As in Don’t Even Register.    I’ve never DNS’d a race because I register super late.  I figure I’d rather pay $20 more than lose the whole registration fee.   My post back in May laid out my summer race schedule.   It listed a 25K trail race on August 1.  Which I really, really want to run.   But let’s be real here, I haven’t been on a trail since April.     I am not in any kind of shape for a 3200’+ elevation gain.  And it’s by the beach.  Hello humidity.  While I was struggling through the last humid miles at Shoreline, I came to the conclusion that a humid 25K just might kill me.   That struggle bus was fueling some dramatic thoughts apparently.    So, I decided that a 12K with 1400′ climb would be fine, a little fun with a little difficulty too.   Then there was my leg and let’s be real there too, it’s been bothering me for a while now.  It’s not a new thing.    It’s not like I’ve never done dumb things before (i.e. Ventura half on heavy-duty antibiotics, a 5K after an asthma filled 10k -September makes me stupid) but I am trying to be smart here.  So from 25K to 12K to 0.     Which makes me cranky since our area has 2 trail races a year and this was the last long distance option until Fall 2016.  Waah!   Or so I thought.   🙂   The one I ran in January is coming back in November.   7 days after the Big Sur Half.   Yup, I’m still crazy.  Just not running next weekend.   🙂 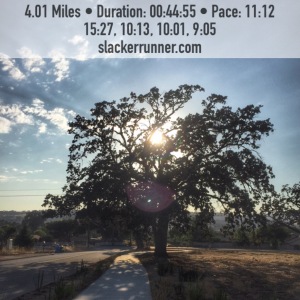 After hiding from the lightning and thunder on Sunday, and the oppressive humidity left behind on Monday, I was ready to try running.   Seriously, I’ve never seen 95% humidity in home town and work was a lovely 100% when I arrived that morning, thanks Delores.     On Tuesday, I changed and headed back to home to run.  I met my mom at the river path which was cool because I was actually really nervous to run so I ended up walking the first mile with her.     From then on I tried to run and just keep things easy.  I focused on how my leg felt and worked on my turn-over.  I know my left hip drops and I need to work on my form.   And now with no races in August, I can work on my form, like back to re-form school for slacker runners.  Oof, that was bad.  🙂  Anyways, the run was pretty good.  My leg felt achy but not in pain.  I paused for a stretch break after each mile and I made sure to stretch really well after my run and later.  I also iced my leg for a bit.  Now, let’s see what happens. 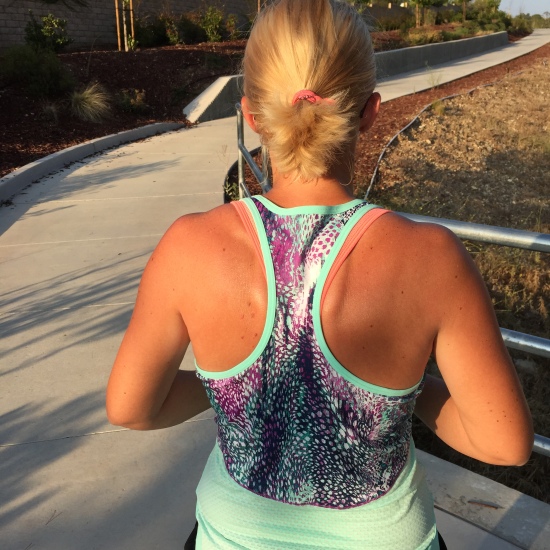 Yeah, so not a clothing model

Back on July 4th I finally caved to one of those Facebook ads and signed up for a Fabletic’s outfit.    They were offering an outfit for as low $15 so I figured why not.   After their little questionnaire, the site suggested a few outfits.   I didn’t buy any of those but finally chose one on another page.    Shorts, tank and visor for less than $20 after taxes.   I wore the shorts and tank on Tuesday’s run.  Somehow, I’ve already misplaced the visor.   😦     I sized up for both pieces which worked well with the shirt as I think my normal size would have been too small.  The waistband on the shorts feels super loose so a smaller size may have worked but damn they are short in the back.    The material felt slightly heavy when on and I was less than enthused with the shorts on that first mile.  They kept riding up.    Grrr.  Somehow running made all the irritation go away.    3 miles of running and both pieces were perfectly behaved.    I even forgot the shirt was new, it fit so well.      The second I started walking my cool down, the shorts went back to riding up.    WTH?!    So, overall I am not hugely impressed but not overly disappointed either.    More of a meh.   Why can’t Lulu be more affordable?