You know, I am not sure how to title these anymore.   Training for City to the Sea may be over but Big Sur is now less than 2 weeks away.     The goal was to keep my fitness steady before Big Sur and before I carry out a new training style after that.  Well, hmmm.

Monday- Last Harvest Marathon meeting.    Race day was less than 7 days away and there was a lot to be done.   Again, not that I was doing much- I just upped my media posting for the race.

Tuesday–  Had an evening meet up with the some other people from work.  There was a point in time when everyone in my position knew each other no matter which city we were in but the company has doubled in size in the last year or so and we can no longer say that.  Someone suggested that we try to meet up outside of work.  I figured why not?

Wednesday- 3.5 miles  It felt good to get out running.   I had only taken 3 days off from running but I was feeling twitchy.  I went to the lake and just kept it nice and easy.     It was a good run.  As I ran back towards the parking lot for my second lap, I noticed a group of people all clustered together just staring at the sky.  Umm, what did I miss?   Turns out there was a giant hawk hanging out in the trees.

Thursday-  Kettle bell workout.   I had planned on running again but my stomach had other plans.  I tried reintroducing some foods I have been missing during my paleo attempts and it didn’t go so well.  I figured the dvd would still be a good work out and I could quit easily if I needed to since I was at home.  I completed the workout, and felt wrecked.  Man I need to strength train more. 😂

Friday–  Oh mama, it hurt to walk.  I think the weighted squats broke me.  Let’s not even talk about sitting and standing.


Saturday– 3.1 miles.   I woke up with a niggling headache but ignored it.    I originally had a shower to attend but things had changed so I headed out for a short run before I needed to head to volunteer at the registration/ pick up tent for the Harvest Marathon.   Seriously my legs felt broken, I ran so slowly.   They finally loosened up a bit when I hit my driveway.  Figures.  😌     I then went to registration.  The temp being in the mid-80’s with high humidity was not helping my headache any.    I worked the pick up tent for a few hours before heading to the school to find out where I was stationed the next day.  I was assigned to be the course monitor for my mother’s water station so score.   My head was pounding so I headed home after that.   Slept with an ice pack in an effort to try to head off a migraine.

Sunday– Harvest Marathon!!   So early.   It was dark but not cold when I got up.  My head was so rough, I headed to McDonald’s for a coffee and a soda before the volunteer meet up.  Yes, soda, even though it wasn’t even 6:15 yet.   I was hoping the caffeine would help my head.   Picked up some of the kids and headed out to our little corner.    Thing about the Harvest Marathon?  It is a benefit for Paso Robles School Athletics- all the aid stations are staffed and run by the high school sports teams.   This station was the tennis team- hi mom!   We set up and we were ready!   We were at mile 8.5, so the first runners would be coming through around the hour mark.    The kids had water and Fluid and were cheering on the runners.    They all looked strong but you could also tell the hills were harder than they had hoped.   Another thing about Paso?  There is no such thing as flat.    One guy was hilarious.  He had a thick Texas drawl and he comes running up saying- “Well, I had been running a 9 minute pace, but that last hill put me at 11!”.  He got water and rounded the corner- up another hill.  We could hear him saying “and now I’m at 13!”. 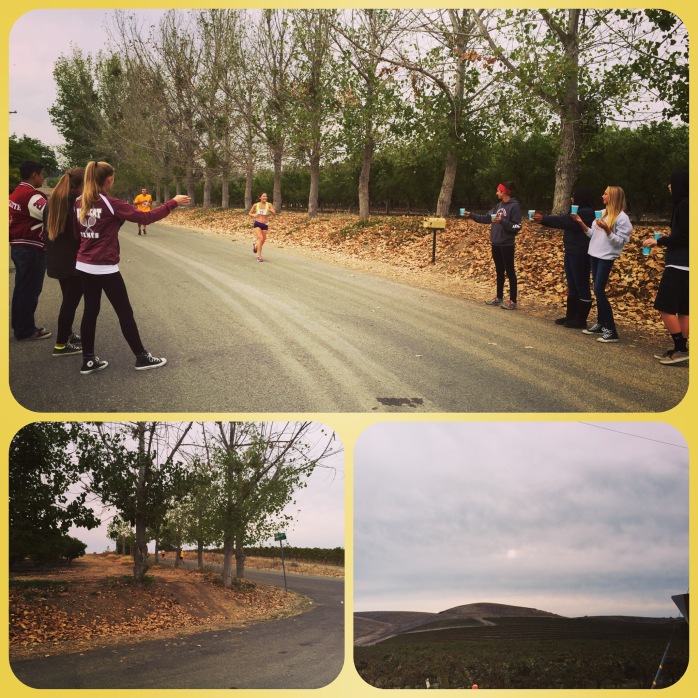 My head was really throbbing and I was feeling super nauseous so at one point I went and sat in my car for 20 minutes.  I could no longer deny the migraine.   Grrr.  The last of the runners went by and after waiting longer we all headed out.  My mom had planned breakfast with her team after and I went along.  My head hurt so bad, I just sat there.    Once home, I took a super long nap.   I really wanted to get in a 10 miler but I had troubles getting to the bathroom so that did not happen.  Grrrr.   I usually average one migraine a month so hopefully it will be cooler when the next one hits.  This weekend was pretty warm and humid.   Cooler than the 90’s but still pretty warm.

So it was a week filled with running related events just not as much running as I had hoped.   I’m rolling with that though and it just leaves room for improvement this week.    Truthfully getting through this weekend was a big check on my to-do list.   I feel so much less stressed now, so yay!

Ever work a water station for a race?