Training for:  The San Francisco Marathon

Focus- Training plan gets real.  Stay strong with 4, if feeling good step up to 5 days.

Well, that was a mixed bag.   This week was weird, not sure why, it just seemed off in some way.  It also flew by.   One moment it was Monday, the next it was  Thursday.  I can’t keep up!   Like I said in Friday’s post, this was the week I most nervous about- the week marathon training got real.  It started pretty well actually and ended with an oops. 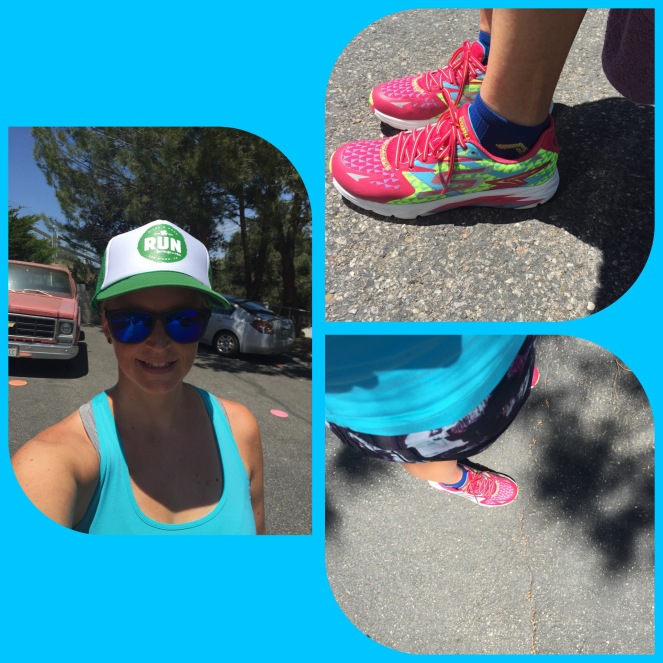 Monday- 4 miles easy  My  legs were feeling pretty achy after SLO, so for once it was very easy to keep it easy.  I always have a hard time with that.  Well, truthfully, keeping any sort of consistent pace is hard for me- be it slow or fast.   I had the day off of work so I headed out around noon.     I had a doctor’s appointment in the early afternoon and I wanted to get it done before that.   My legs were super tired but it felt good too get them moving.  It was also my second run in my Skechers.   Still doing ok.

Tuesday-  Rest   When making my training schedule, I knew this workout might not happen.   I knew that if I needed an extra rest day after SLO, it would be this day.  I was hopeful that I could run it but of the workouts of the week, I deemed the tempo more important.   My legs felt rough, I realized that I needed to run more hills after SLO.  I should not have been that sore.   I waited until the end of the work day but then decided the smarter thing to do was rest.

Wednesday- Rest This time scheduled.  I ended up having a sponsor dinner after work that went way longer than I thought it would.  But the food was good and the company hilarious. 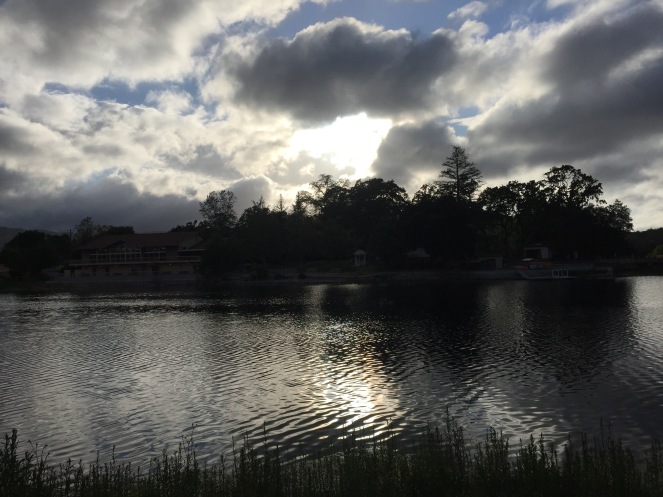 Thursday- Tempo!!!  1.2 mile w/u, 5 mile tempo, 1 mile c/d  I don’t know if I am more proud of the tempo miles or the fact that I actually completed a warm up and a cool down. 😝   Tempo’s freak me out, so to stack the deck in my favor, I headed to the lake path after work.   I needed the odds in my favor for this first one.  Once again, I was a rebel and ignored the path closed signs.  I was more of lemming, I made sure that there were plenty of people out there breaking the rules too.  I’m not sure I like the changes to the path that are in process.   After my warm up, I started the tempo portion.  I was trying to run by feel as best as I could, I only checked my watch twice for every mile.  I thought I blew the whole thing when the first mile clocked in at 9:45, 30 seconds off my intended 10:18.   Crap.  I figured I would blow up in the second mile.  But I didn’t.  So I just kept running and tried to keep it comfortably hard and consistent.  I counted each mile out loud and threw my hands in the air when I hit mile 5.   Woo hoo!!  I know my next ones won’t be this awesome but that’s ok.  I needed this one.

Friday- Rest   Oof.  I worked open to close and it was a rough day.  I felt a little ragged by the end of the day.   Cue Pizza night. 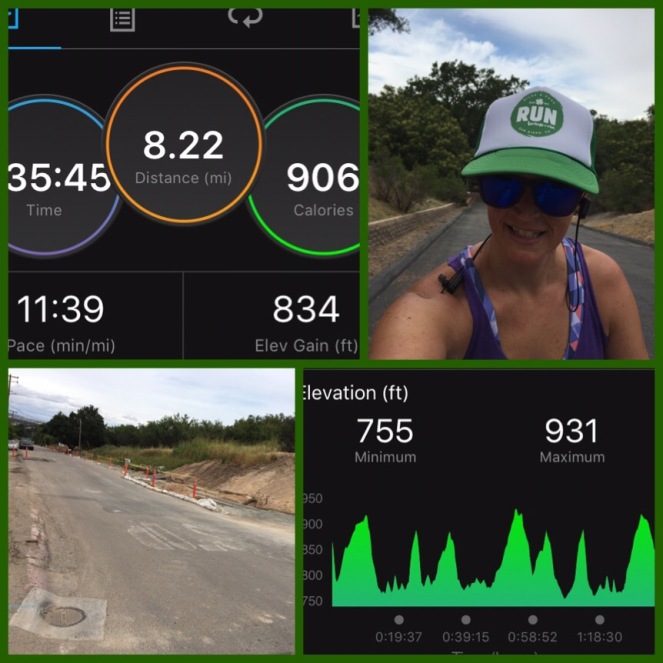 Saturday- 8 easy miles.   Hills for days!!   SLO showed me that I have done a pretty good job of avoiding hills the past few months.  I may have been putting in the mileage but the average elevation gain of each run was only in the 200’s.  Oops.   So I figured my easy weekend run could be all about the hills.  Plus I may have figured out how to maintain the prescribed easy pace-hills!   I ran what used to be my typical route last year but added every hill I could find.   The run actually went well, it was also the farthest I have run in my Skechers and they did ok.  I feel like my left foot could use more arch support but other than that, they were ok.   I only took a few walk breaks which is kind of awesome. I just kept trucking up the hills.     I was feeling pretty good after this run.     😊

Sunday- .  Oops.   Entirely my fault,  I let time get away from me.    I set my alarm so I could run early but when it went off, I just couldn’t.    New carpet is coming soon so my closet was repainted.  I went to the movies (Captain America– amazing!) Saturday night so nothing was put away.  I couldn’t even get to my bed as everything from the closet was on it.  I tried sleeping in a chair but ended up sleeping on the floor in the closet.    As awkward as it sounds, it was actually one of the best night’s sleep I’ve had in a while.  My neck and shoulders disagreed and they took a few hours to loosen up.  I was planning on running mid afternoon before any Mother’s Day dinner plans that we had but my car threw a temper tantrum.    My automatic stalled.  Then it wouldn’t drive without bouncing.  Grrr.  Dad, help!  Between that, actually putting things back in my closet and dinner, I just ran out of time.   Lesson learned- listen to the alarm.

So the week started pretty strong but hit a big speed bump on Sunday.  Oops.   If I was training for a half, I would feel good about this week.  Missing Sunday’s 8 makes me nervous.   On one hand, I am glad I finally got a good night’s sleep, so maybe they will balance out?  We’ll see.

Diet wise– I’ve been kind of quiet.   The weeks leading up to SLO were kind of a train wreck.   Last week was hit and miss.  Lunches and breakfast were on point but, ummm, 4 donuts happened last week.  Giant miss.

Should I be nervous about that missed 8?

New shoe Sunday.
Imposter.
Volunteered at the local Turkey Trot this morning.
Have I mentioned I love good mail days???❤️❤️
Is it ironic for a Slacker to be wearing a shirt that says “Do The Work”?
Oh, Timehop was brutal toady. This time last year, I was at the Grand Canyon.