I love beach races and I hate them at the same time.  I have learned that I personally will never set a PR on sand.   Partly due to the sand and partly due to how the humidity jacks with my lungs.  Either way, I seem to be a glutton for punishment as I keep signing up for them.   Plus this race tends to fall around my birthday so it’s become sort of an unofficial tradition.

This was my third year running some form of this race this year, second time running the half.  I didn’t have many goals going in other than complete the first part of my last big run and maybe finish quicker than 2014’s hot mess.

Yeah, neither of those were achieved.  In fact, I managed to turn in my slowest half ever!  That said, this recap will be a little different than my usual ones.

The morning started off interesting as I made it all the way down my driveway before realizing that I had forgotten my Garmin.  Seriously?  I actually debated going on without it but in the end I went back to get it.   I had hoped to run a little warm up prior to the race but my stomach was feeling iffy so I headed straight to the bathroom lines after parking.   Major props to clean, well stocked real bathrooms.  Once that was taken care of, I walked around the Rock parking lot and tried to shake loose.  Then I headed for the starting chute.  For the first time,  I was actually in the chute when the race started.  I can’t say that for the other years.  😛

It was clear at the start and I was hopeful it would stay that way.   The first 2 miles actually felt pretty good.   9:59, 10:31.   My legs were cooperating and the sand wasn’t too bad.   I was naively hopeful that things were going to stay that way. 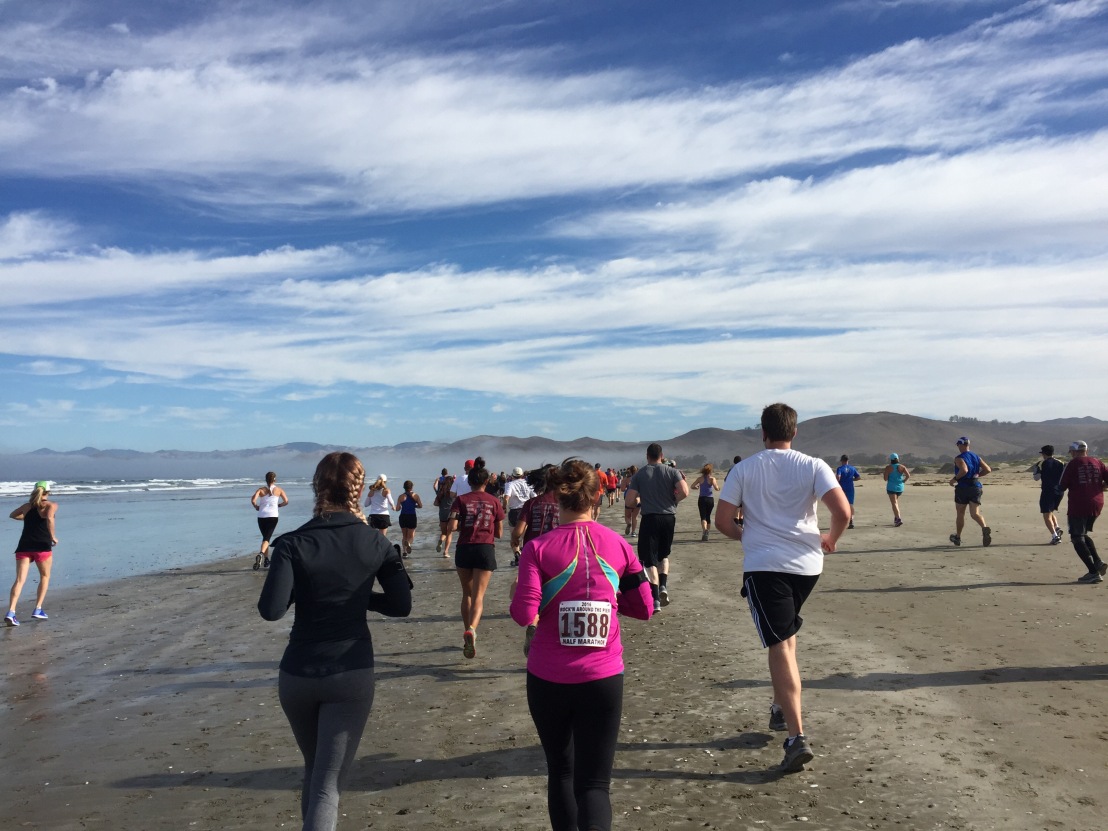 I could not breathe.  My lungs were so tight.   I was slowing down with every mile.  I seriously considered quitting at the pier.  When all the 10k’ers were heading to their finish line and I had to turn around and head the other way.   I almost quit.  Almost.  But my car was at the rock, my parents were coming to the finish and San Francisco has fog right?  Besides the pier was clear so I was hoping the marine layer was burning off.   Mile 6-12:29

Breathing was so damn hard.   My throat was on fire, my lungs and chest hurt.  I was beginning to wonder if you could OD on an inhaler.  But there was no where to go but forward.  There was only one way off the beach. 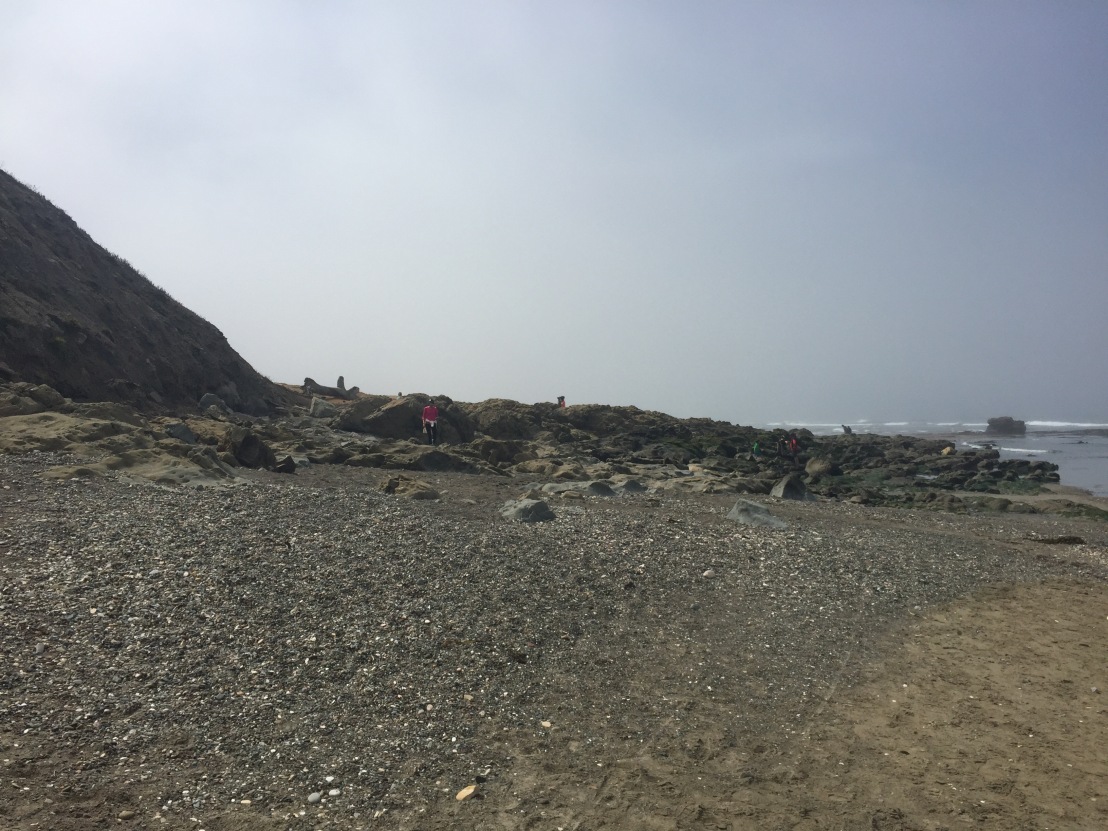 The rock patch the second time through was sketchier- by now I was mostly by myself and there was no one to follow.  Plus I was tired.   But I made it and knew I had less than 3 miles to go.  The fog was so dense, I was beginning to worry I was going to miss the turn off to head up the beach for the loop around the park.    Someone came up behind me and passed me so I just followed them.  Between the rocks and sinking in the dune sand, I had slowed to a crawl but I just kept moving.  14:33, 15:59, 14:16


I was able to pick up a bit of speed on the pavement around the park but not much of anything.   I suppose I could have quit at that aid station but the finish was less than 1.5 away.  So back to the beach to finish out my crawl.   I was a mile from the rock but I could not even see it through the marine layer.  It was getting patchier so I was keeping my fingers crossed for sunshine.  Half a mile from the finish and my wish was granted.  Way too late but oh well.  13:13

The advantage of crawling?  I was able to spot my parents and wave to the camera as I jogged in.  😛 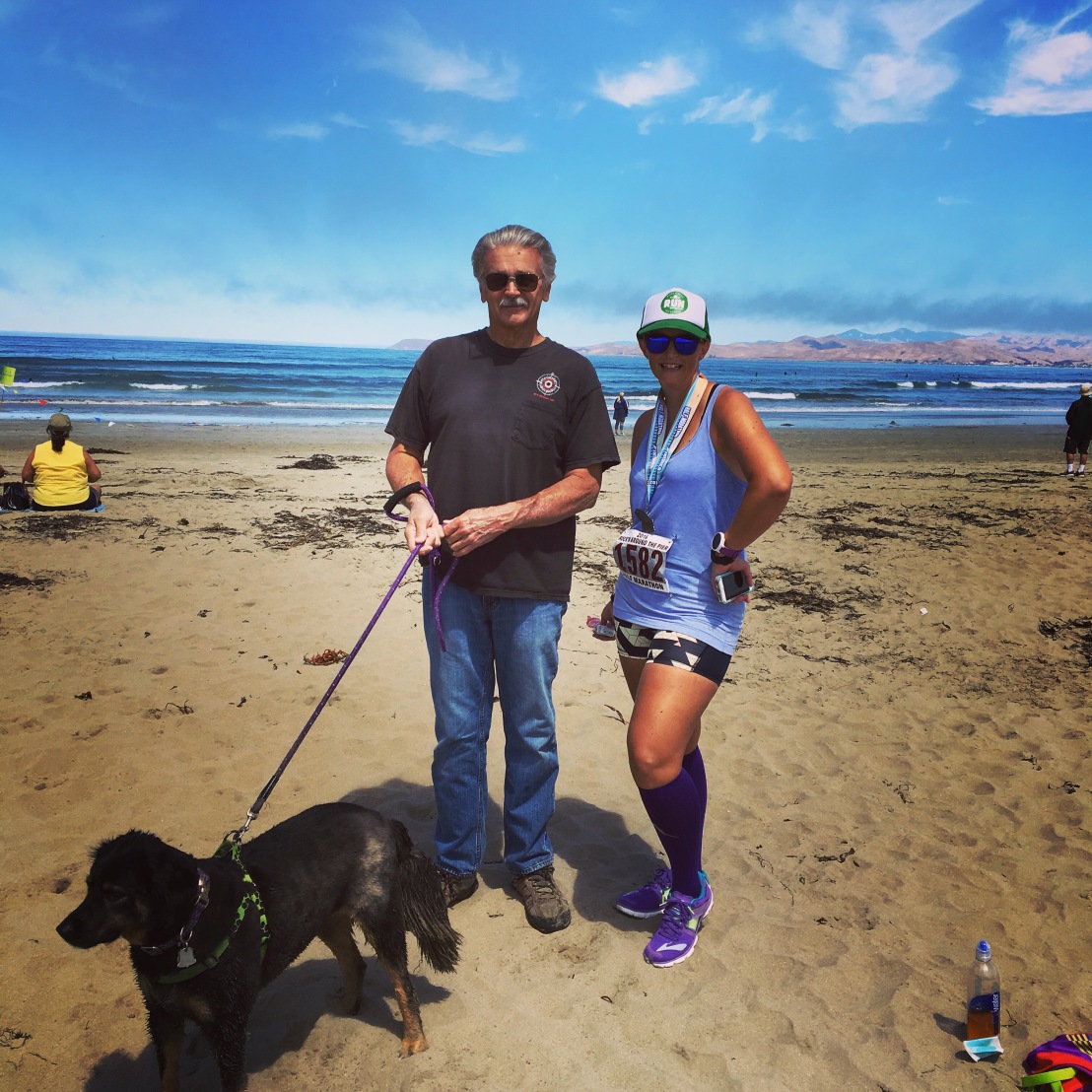 So yeah, that was fun.  I actually finished with a smile on my face though.  It is what is.  Was it the race I wanted?  No.    But I listened to my body and slowed way down.   Had there been anywhere to go, I may have quit but in reality there weren’t any shortcuts after the pier so I just kept going.  I do wonder now if the race is prepared for emergencies though, I only saw what looked like a course monitor once.   And it could have just been a cyclist in a yellow vest- who knows?

I do however know that I cannot run 26 miles like that.  So now I am hoping for a clear day in San Francisco.   Fingers crossed!!!! 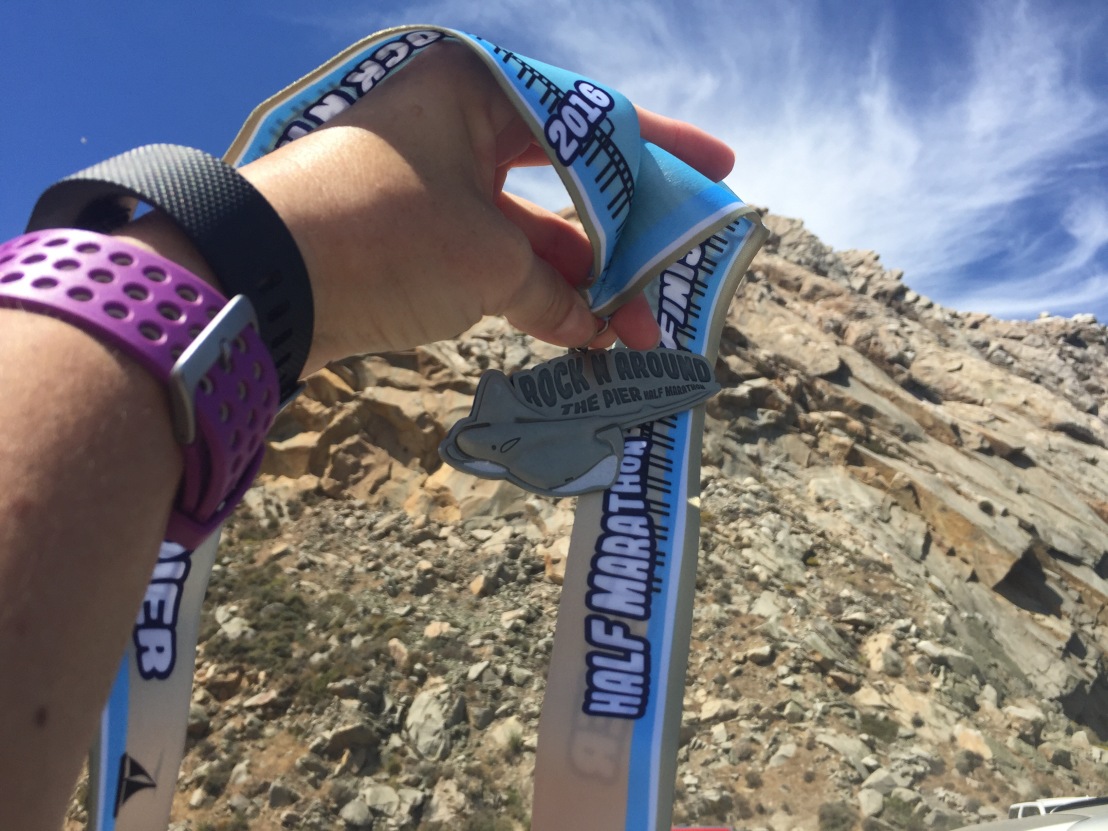 I still really love this race.  I will be back next year… but maybe just the 10k.  😛