My first night race! My first race in another state! 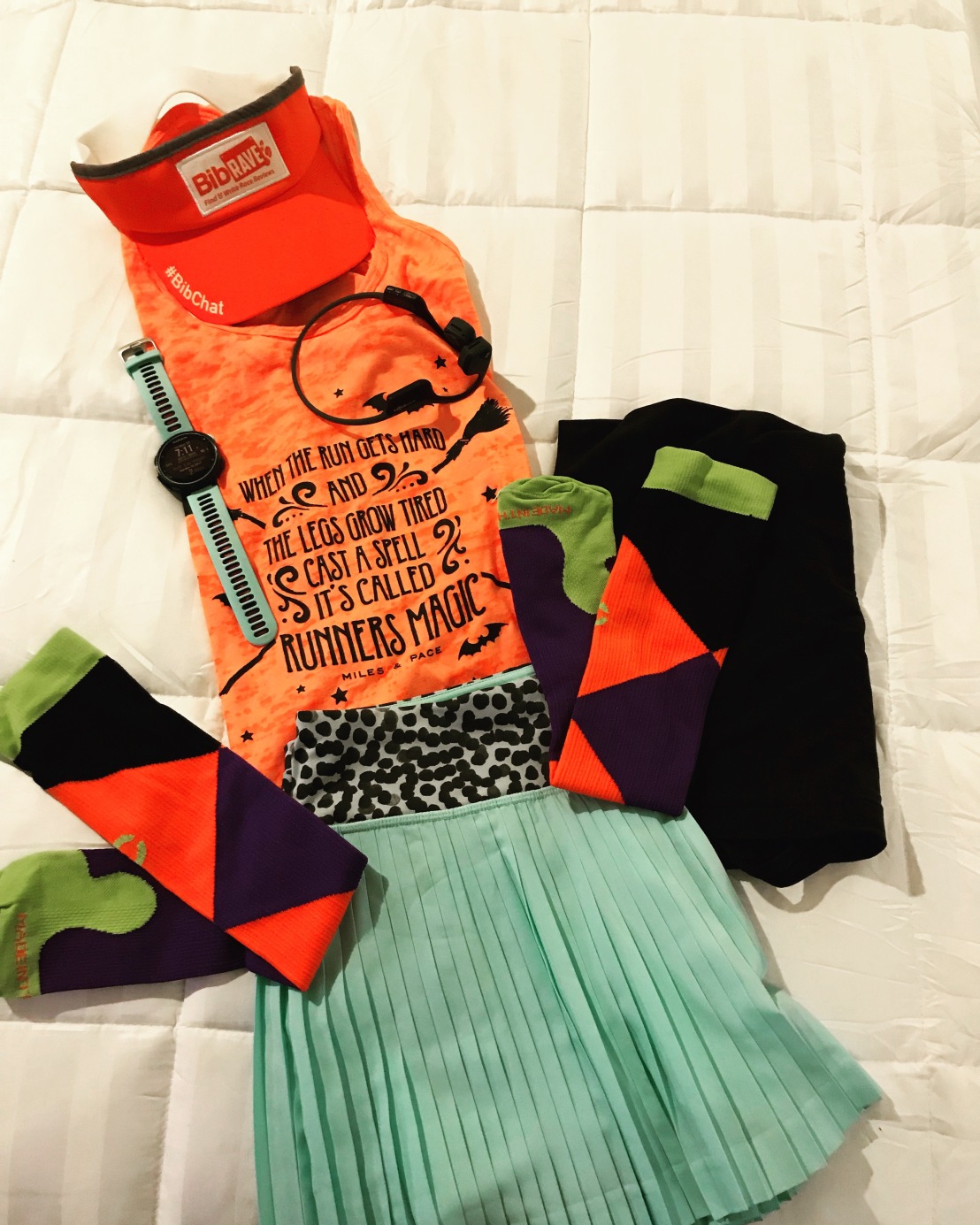 The 5K was up first on Saturday evening and would be followed by the headliner concert with The Goo Goo Dolls.  Kate was super organized so we had a plan of exactly when to leave our hotel with plenty of time to get to the Las Vegas Festival grounds.    Or so we thought.

The monorail platform was jam packed with runners, spectators and a few daring Las Vegas travelers.  Needless to say it took a few monorail passes before we managed to get on one and then it was like sardines in a can.  Or even closed than that.  I jokingly call it the “friendliest” monorail ride ever.  Seriously, we were so close, there was awkward touching happening.   We were all cracking jokes about it but it was still super awkward.  And each monorail stop just had more people trying to squeeze in, we had no space!!!

Finally we arrived with minutes to spare and all rushed through the casino to cross the street to the festival grounds only to be greeted by a giant line trying to get through security.  They were checking everyone’s bags, waving medal detector wands over everyone and had made people dump out their water.  They let me keep mine but I left it in my gear bag which we tossed to Kate’s parents as it was past start time and we had no idea where the gear drop trucks were.  They had taken a taxi to the festival, smart people.  😛 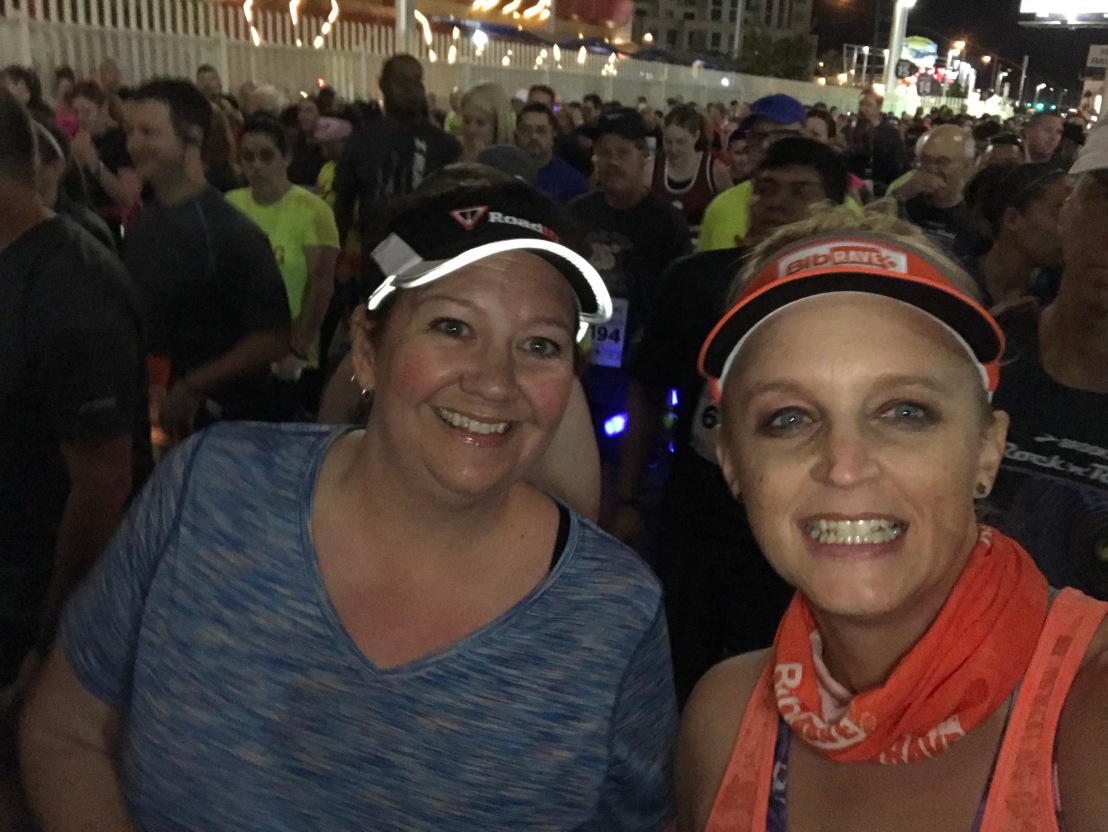 We hustled over to the second set of corrals and looked for Kate’s corral.  One security person tried to make me go line up in mine- my original corral was 4- but not only had it already left, with my leg being whiny all week, the plan was to run the race with Kate and we were aiming for party speed😀.  All race info said it wouldn’t be a problem to drop back.  Except to this one person.  Grrr.  She turned around and we jumped into the corrals.   As we made our way to the start line, we soon realized we should have had some lights or glow sticks to brighten up our outfits.  Oops, too late now!  After a few minutes in the corrals and an energetic countdown, we were off! 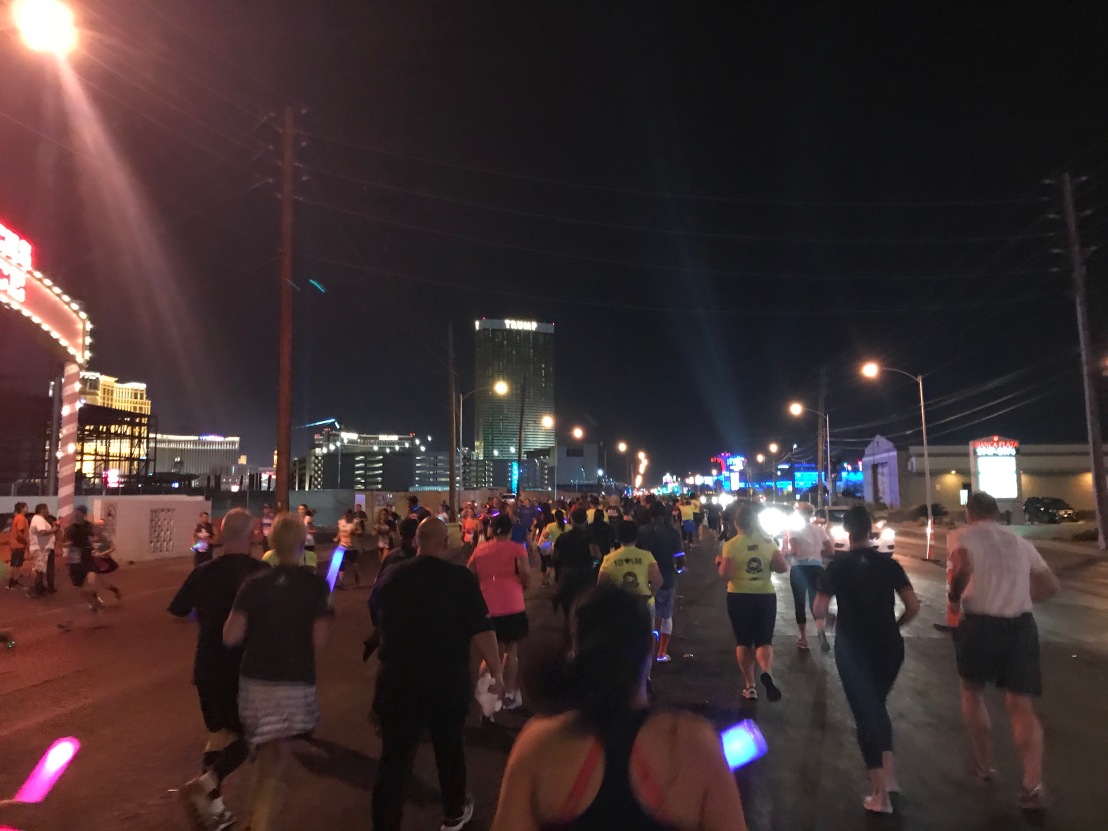 The course was an out back on the road behind the Strip, so it took you behind Circus Circus.  I had no idea that thing has an actual Big Top until I was running by it.  I know this was a night race but I was still surprised by how dark it was.  A light wouldn’t have been a bad thing, that road is not lit up like the Strip.  It still had music stations- DJ’s, speakers and live bands along the way to liven it up, plus checking out all the runners in their glowing outfits was fun, it was just darker than I thought. 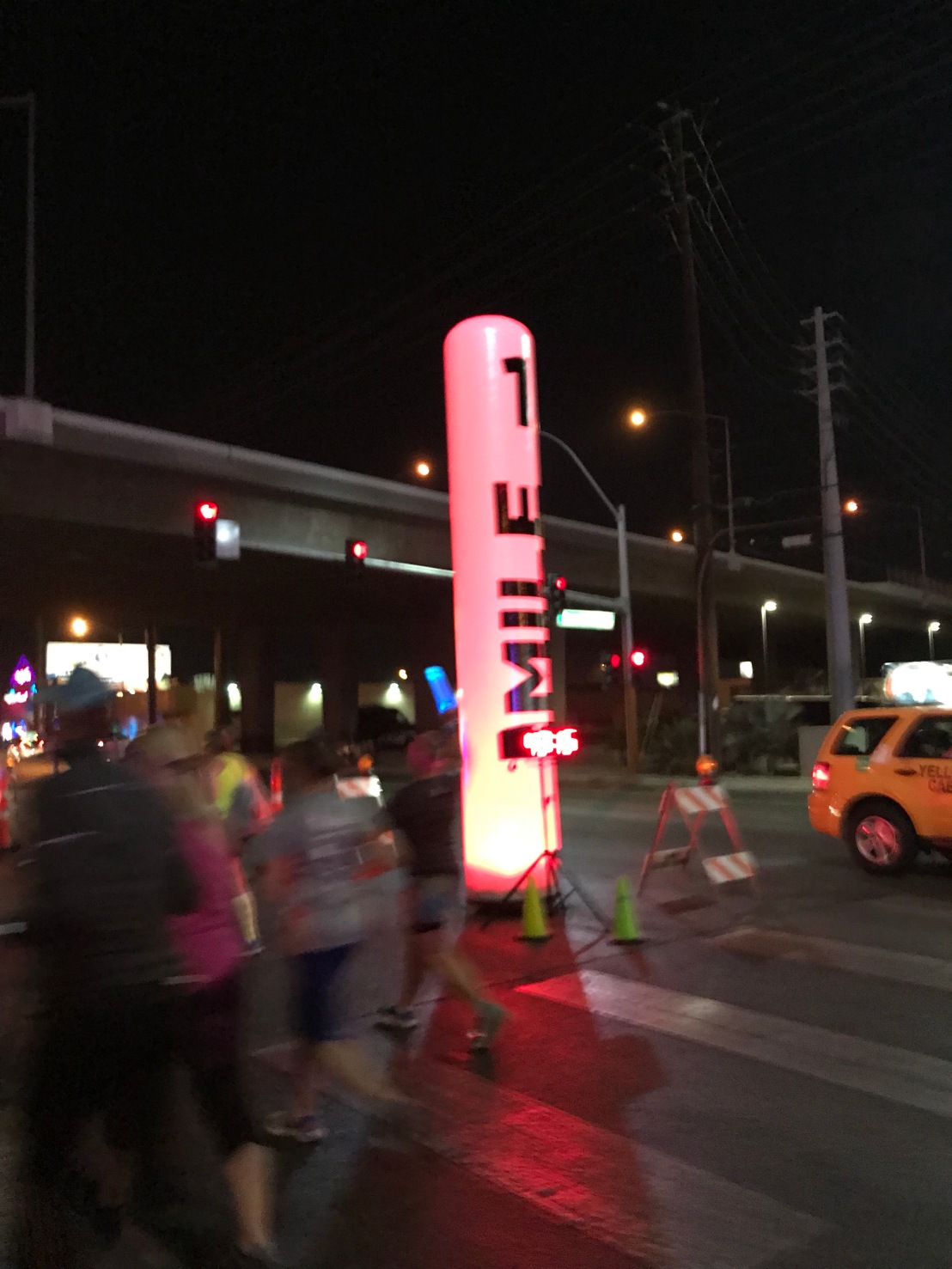 I told Kate to set the pace and I would do whatever she wanted but at one point during mile 1, I looked at my watch and tried to subtly slow her down.  Hey, you’re running your first half tomorrow! I needed to be less subtle.  😛  She heard her GPS app speak and then knew what I was saying.  But we were having fun.

One thing that helped reign us in was the lack of water.  There was one water stop- at mile 2.   And even though it was an out and back course, there was a center divider so you could only access the water at mile 2 not on both sides.  It was still 70 degrees at race start.  And security had made people dump their water.  I left mine behind thinking oh Rock n Roll has this.  See a problem? 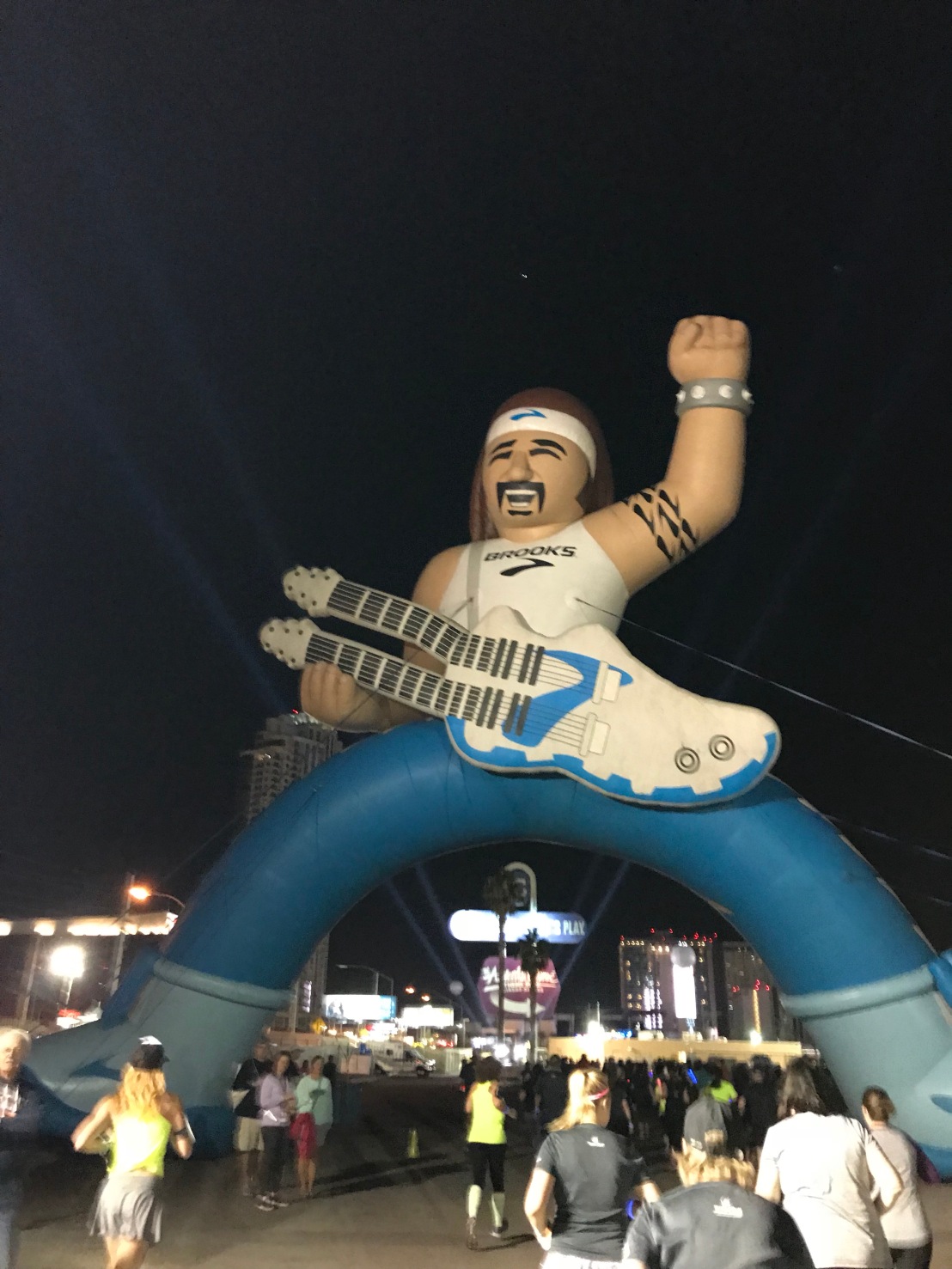 Once back into the festival grounds, we looped around the back lot a bit to add distance before passing a KISS cover band and running under the giant guitar guy towards the finish.


Once across the line, we picked up our medals and they gave us a few snacks and a bottle of water.  Then we hung and waited a bit for The Goo Goo Dolls to take the stage.  They still sound good!   We hung for a bit before heading back on thankfully less crowded monorail. 👌

Race #1 of the weekend complete. Half recap soon to come.  🙂

Disclaimer: I received an entry into Rock n Roll Las Vegas as part of being a BibRave Pro. Learn more about becoming a BibRave Pro (ambassador), and check out BibRave.com to review find and write race reviews!

Seriously, I still can’t believe it’s happening.  I also still don’t know how but that’s beside the point.  😛  I have wanted to run this race ever since I flipped a page in Runner’s World a few years ago and realized there was a race on the Vegas Strip.  And it was at night.   I want to do that!!!   As amazing as it looked, I could never make it work.   So when the chance to run it came up this year, I leapt without looking. 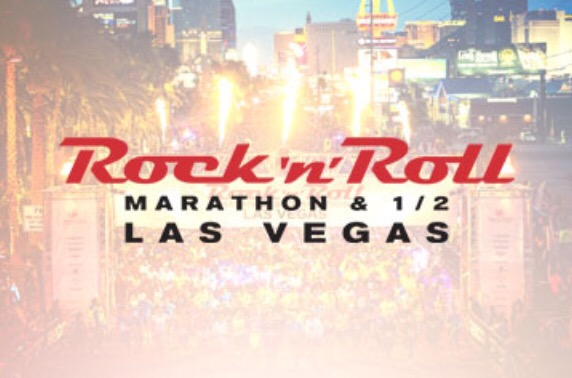 Sorry had to say it again.  😛   I haven’t been to Las Vegas since I was a child- seriously the only thing I remember is colorful carpeting and even that might be confused with another memory.    Ha!   Due to scheduling conflicts, my mother is busy so I’m also flying solo this race trip.  Who wants to join me?!? Slacker’s first real trip to Vegas?  😁 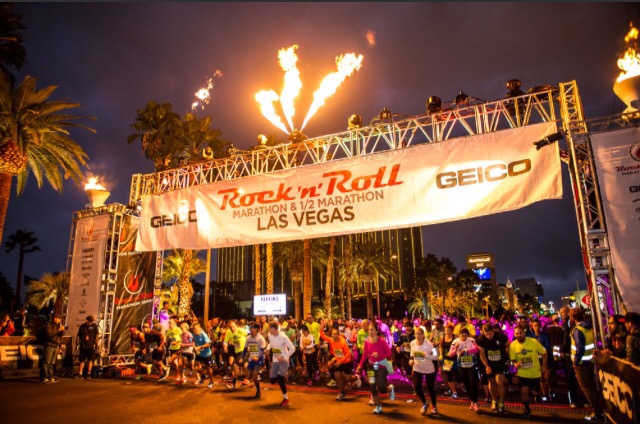 This is also an afternoon- evening race so I don’t even have to worry about an early wake up call!   I can sleep in and look forward to an afternoon run with thousands of other crazy runners like me under the Vegas lights!  Is it November yet?

Now I just have to figure out how I am getting there.   This could be my first plane ride since my senior trip in high school!  Ok, now this post is making me feel nostalgic and old.  😛

I will have a discount code soon that I will share with everyone.

Have you ever run Las Vegas?

Want to come run with me?